This article discusses the current-mode control that is widely used for switching mode power supplies and gives insights to current sensing methods.

Current-mode control is widely used for switching mode power supplies due to its high reliability, simple loop compensation design, and simple and reliable load sharing capability. The current sense signal is an essential part of a current-mode switch mode power supply design; it is used to regulate the output and also provides overcurrent protection. 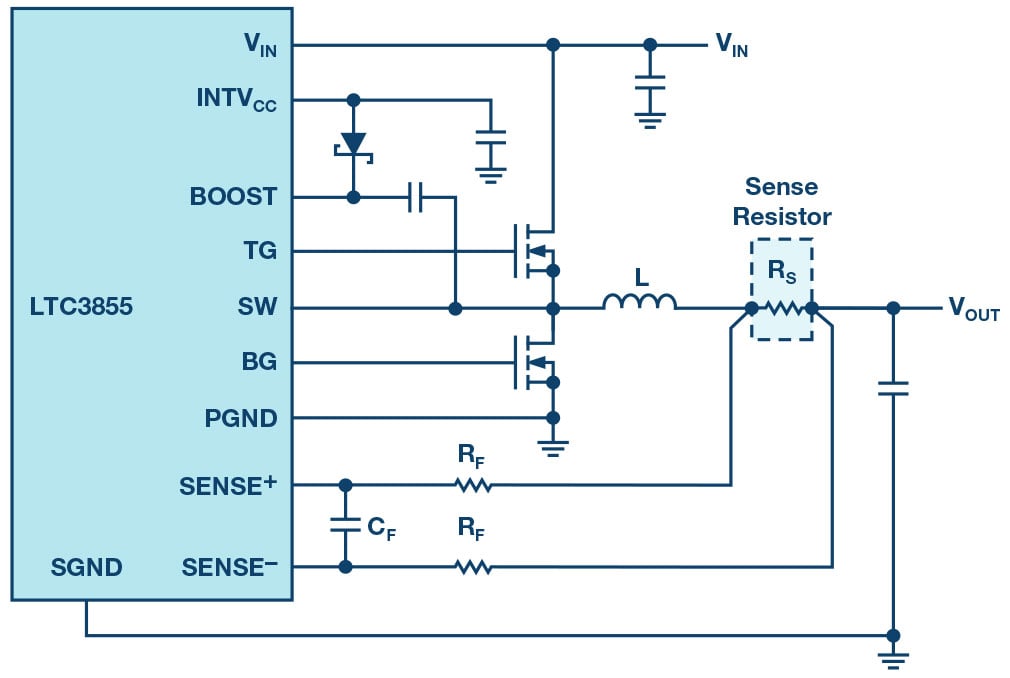 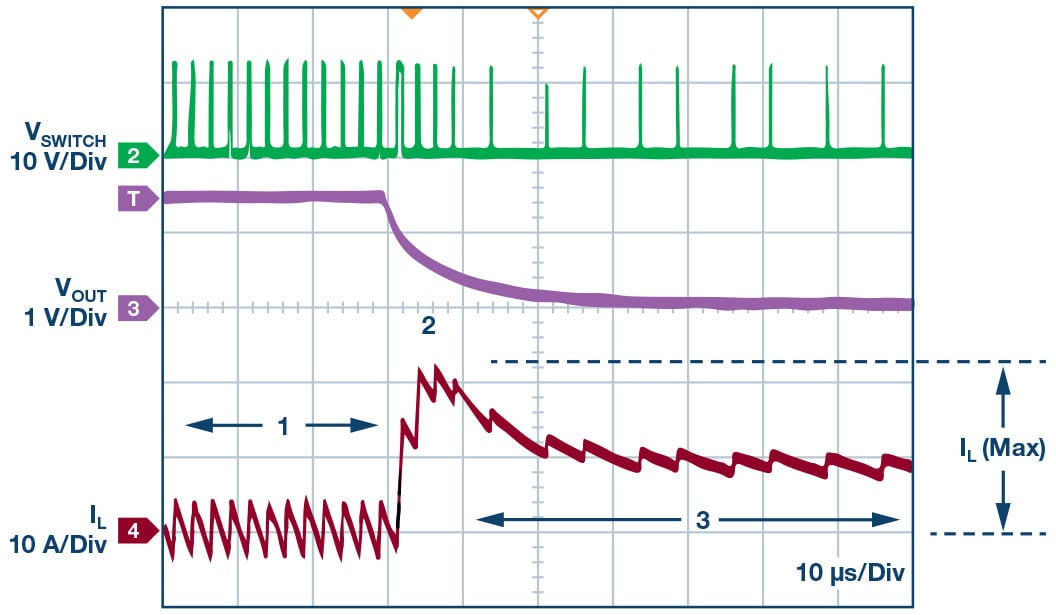 Current sensing also serves other purposes. It allows accurate current sharing in a multiphase power supply design. With lightly loaded power designs, it can be used to increase efficiency by preventing reverse current flow (reverse currents are currents that flow the opposite way through the inductor, from output to input, which may be undesirable or even destructive in some applications). In addition, when a multiphase application is lightly loaded, current sensing can be used to reduce the number of phases needed, which increases circuit efficiency. For loads that require a current source, current sensing can turn the power supply into a constant current source for applications such as LED driving, battery charging, and driving lasers. 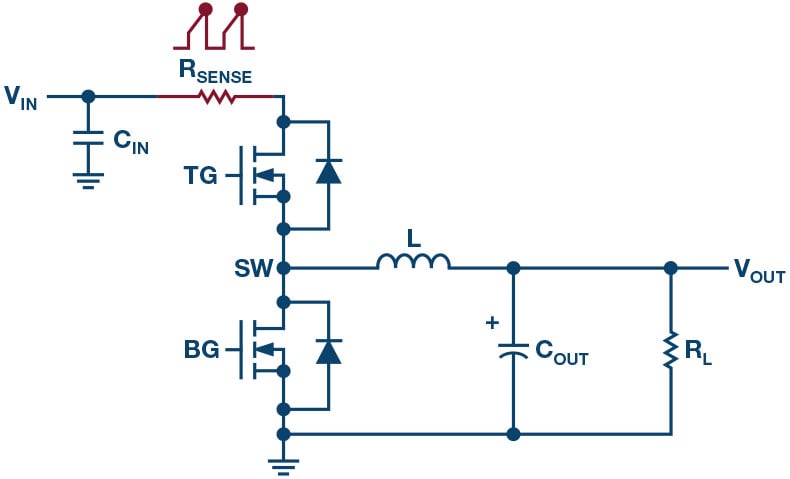 In this configuration, current sensing can be noisy because the turn-on edge of the top MOSFET has strong switching voltage ringing. To minimize this effect, a long current comparator blanking time (the time during which the comparator ignores the input) is needed. This limits the minimum switch ON time and can limit the minimum duty cycle (duty cycle = VOUT/VIN) and maximum converter step-down ratio. Note in the high-side configuration, the current signal can be riding on top of a very large common-mode voltage (VIN).

In Figure 4, the sense resistor is placed below the bottom MOSFET. In this configuration, it detects the valley mode current. To further reduce power loss and save component cost, the bottom FET RDS(ON) can be used to sense current without using an external current sensing resistor RSENSE. 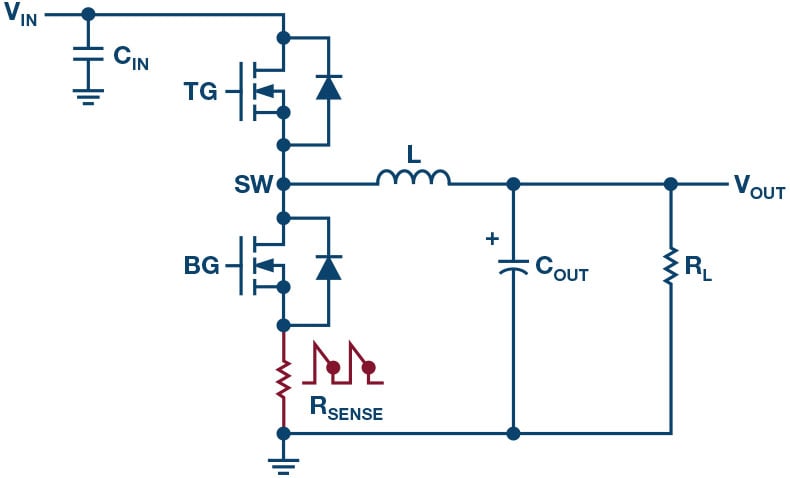 Buck Regulator Placement in Series with the Inductor

Figure 5: RSENSE in series with the inductor.

For a step-up (boost) regulator, the sense resistor can be placed in series with the inductor providing high-side sensing (Figure 6).

Since the boost has continuous input current, a triangular waveform results and current is continuously monitored.

A 4-switch buck-boost converter is shown below in Figure 8 with the sense resistor on the low side. The converter operates in buck mode when the input voltage is much higher than the output voltage, and in a boost mode when the input voltage is much lower than the output voltage. In this circuit, the sense resistor is located at the bottom of the 4-switch H-bridge configuration. The mode of the device (buck mode or boost mode) determines what current is being monitored. 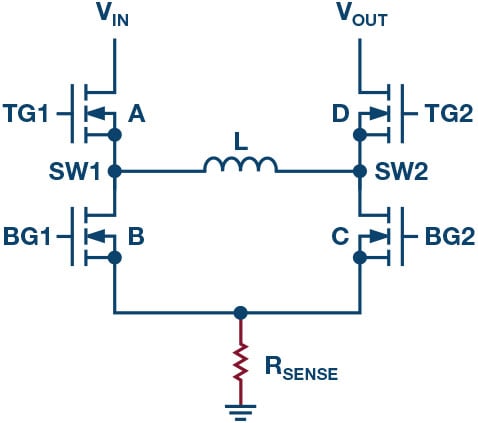 Figure 8: Buck-boost with RSENSE on the low side.

In buck mode (Switch D always on, Switch C always off) the sense resistor monitors the bottom side Switch B current and the supply operates as a valley current mode buck converter.

The circuit of Figure 9 resolves this issue by placing the sense resistor in series with the inductor so that the inductor current signal is continually measured in both buck and boost modes. Since current sensing RSENSE is connected to the SW1 node that has high switching noises, the controller IC needs to be carefully designed to allow sufficient blanking time for the internal current comparator. 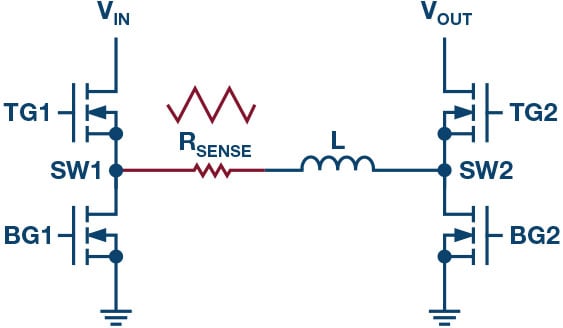 Figure 9: LT8390 buck-boost with RSENSE in series with the inductor.

In most of the above examples, the current sensing element is assumed to be a sense resistor. However, this does not have to be and often is not the case. Other sensing techniques include using the voltage drop across a MOSFET or the dc resistance (DCR) of the inductor. These current sensing methods are addressed in Part 3 “Current Sensing Methods.”

The three commonly employed current sensing methods for switch mode power supplies are: using a sense resistor, using the MOSFET RDS(ON), and using the dc resistance (DCR) of the inductor. Each method offers advantages and disadvantages that should be considered when selecting one method over another.

On the other hand, because a current sensing resistor is added to the power supply design, the resistor also generates additional power dissipation. Thus, the sense resistor current monitoring technique may have higher power dissipation compared with other sensing techniques, resulting in a slight reduction in the solution’s overall efficiency. The dedicated current sensing resistor may also increase solution cost, as a sense resistor typically costs between $0.05 and $0.20. 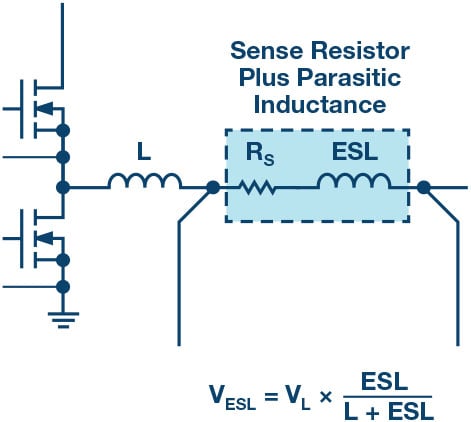 This inductance depends on the specific sense resistor chosen. Some types of current sensing resistors, such as metal plate resistors, have low ESL and are preferred. In comparison, wire wound sense resistors have higher ESL due to their package structure and should be avoided. In general, the ESL effect becomes more pronounced with increasing current levels, reduced sensing signal magnitudes, and improper layout. The circuit’s total inductance also includes the parasitics inductance due to component leads and other circuit components. The circuit’s total inductance is also affected by layout, so component placement must be given proper consideration; improper placement can affect stability and exacerbate existing circuit design issues.

The effects of sense resistor ESL can be mild or severe. The ESL can result in significant ringing on the switch gate driver, adversely affecting switch turn on. It also adds a ripple to the current sense signal, resulting in a voltage step in the waveform, instead of the expected sawtooth waveform as shown in Figure 12. This degrades the current sensing accuracy.

To minimize resistor ESL, avoid using sense resistors that have long loops (such as wire wound resistors) or long leads (such as high profile resistors). Low profile surface-mount devices are preferred; examples include the plate structure SMD sizes 0805, 1206, 2010, and 2512; even better choices include reverse geometry SMD sizes 0612 and 1225.

Simple and cost-effective current sensing is accomplished by using the MOSFET RDS(ON) for current sensing. The LTC3878 is a device that uses this approach. It uses a constant on-time, valley mode current sensing architecture. Here, the top switch is on for a fixed amount of time, after which the bottom switch turns on and its RDS voltage drop is used to detect the current valley or the lower current limit.

Though inexpensive, there are some drawbacks to this approach. First, it is not very accurate; there can be a wide variation (on the order of 33% or more) in the range of RDS(ON) values. It also can have a very large temperature coefficient; values greater than 80% over 100°C are not out of the question. In addition, if an external MOSFET is used, the MOSFET parasitic packaging inductance must be considered. This type of sensing is not recommended for very high current levels, and especially not for polyphase circuits, which require good phase current sharing. 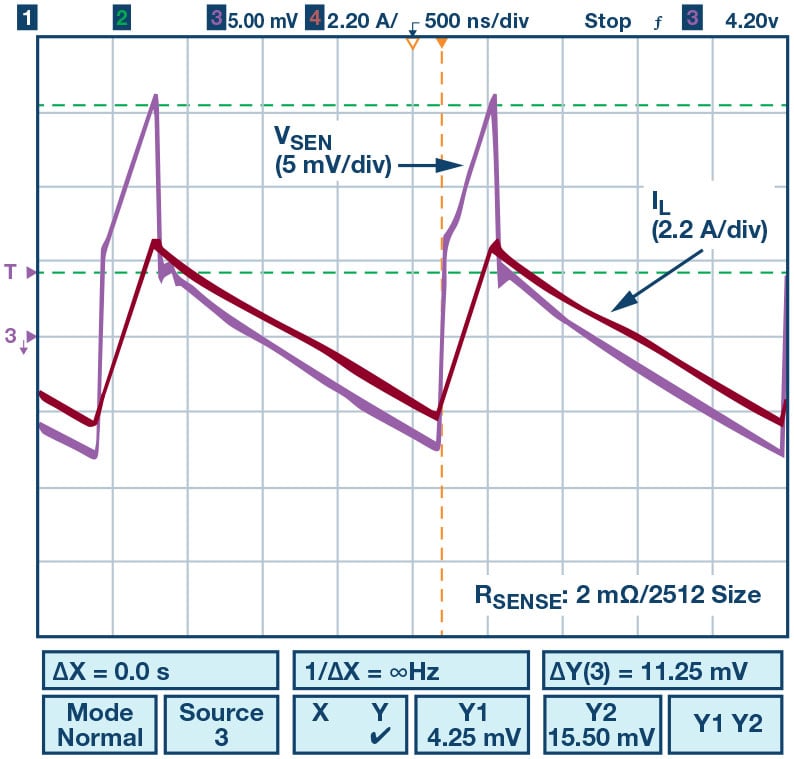 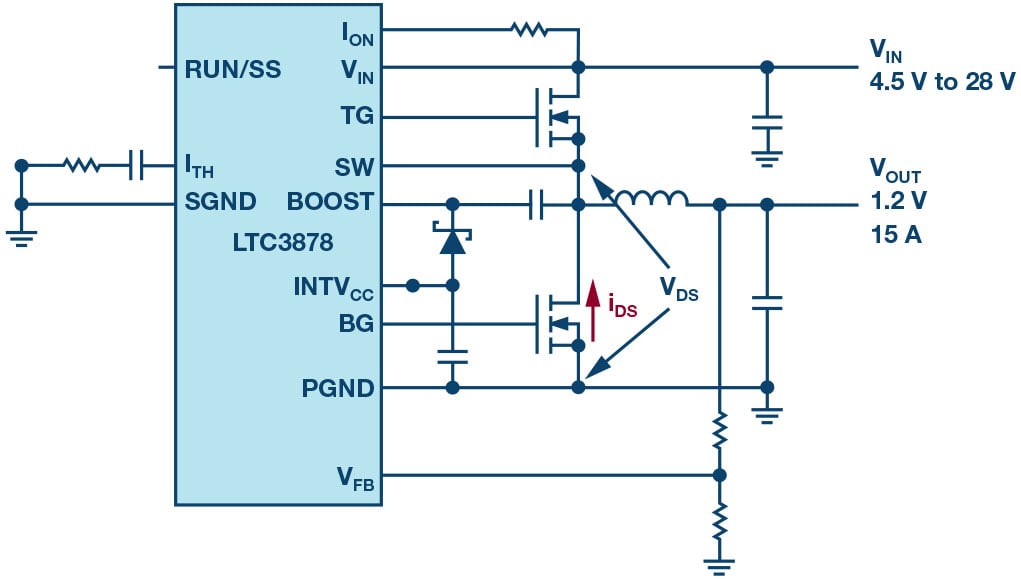 Inductor dc resistance current sensing uses the parasitic resistance of the inductor winding to measure current, thereby eliminating the sense resistor. This reduces component costs and increases power supply efficiency. Compared to the MOSFET RDS(ON), inductor DCR of the copper wire winding usually has less part-to-part variation, though it still varies with temperature. It is favored in low output voltage applications because any drop across a sense resistor represents a significant portion of the output voltage. An RC network is placed in parallel with the series inductor and parasitic resistance combination, and the sense voltage is measured across the capacitor C1 (Figure 14). 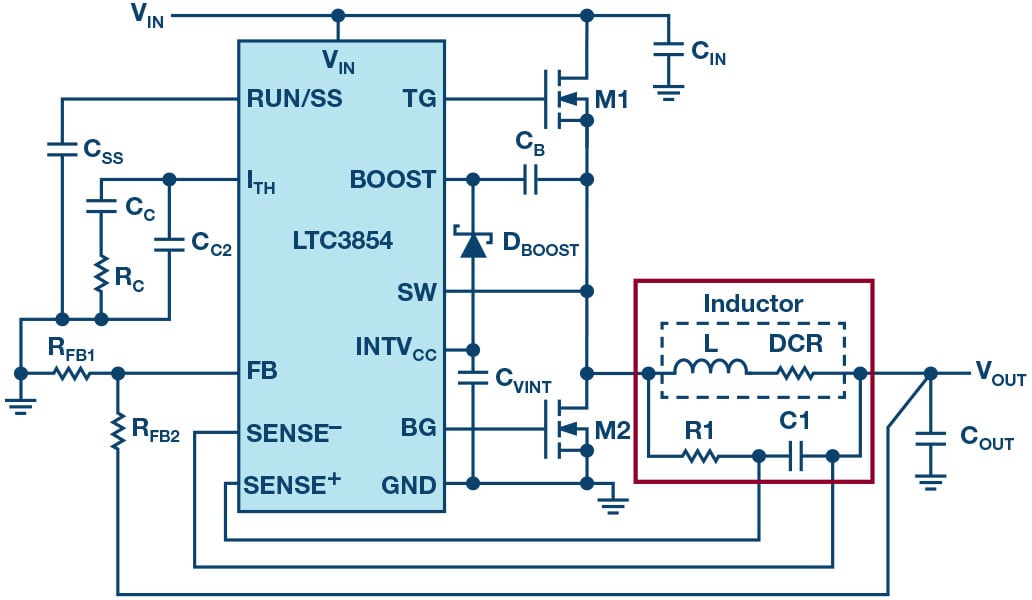 With proper component selection (R1 × C1 = L/DCR), the voltage across the capacitor C1 will be proportional to the inductor current. To minimize measurement error and noise, a low R1 value is preferred.

Because the circuit does not directly measure inductor current, it cannot detect inductor saturation. Therefore inductors that have a soft saturation, like iron power core inductors, are recommended. These inductors typically have higher core loss than a comparable ferrite core inductor. Compared to the RSENSE method, inductor DCR sensing eliminates the sensing resistor power loss but may increase the inductor core losses.

With both RSENSE and DCR sensing methods, Kelvin sensing is required due to the small sense signal. It is important to keep the Kelvin sense traces (SENSE+ and SENSE– in Figure 5) away from noisy copper areas and other signal traces to minimize noise pick-up. Some devices (such as the LTC3855) have temperature compensated DCR sensing, which improves accuracy over temperature.

Table 1 summarizes the different types of current sensing methods and the advantages and disadvantages of each.

Each of the methods mentioned in Table 1 provides added protection for switch mode power supplies. Trade-offs in accuracy, efficiency, thermal stress, protection, and transient performance all can factor into the selection process, depending on the design requirements.

Table 1: The Advantages and Disadvantages of Current Sensing Method.

There are other current sensing methods available. For example, a current sensing transformer is often used with isolated power supplies to provide current signal information across the isolation barrier. This approach is usually more expensive than the three techniques discussed above. In addition, new power MOSFETs with integrated gate drivers (DrMOS) that also integrate current sensing have become available in recent years, but to date, not enough data exists to conclude how well DrMOS sensing works in terms of accuracy and quality of the sensed signal.

LTspice® software is a powerful, fast, and free simulation tool, schematic capture, and waveform viewer with enhancements and models for improving the simulation of switching regulators.

Henry Zhang is an applications engineering director for power products at Analog Devices. He started his career with Linear Technology, now part of Analog Devices, as a power applications engineer in 2001. He became an applications section leader in 2004 and an applications engineering manager in 2008. His group supports a wide range of products and applications, from small size integrated power modules, to large kW level high power, high voltage converters. In addition to supporting power applications and new product developments, his group also develops the LTpowerCAD supply design tool program. Henry has broad interests in power management solutions and analog circuits. He has over 20 technical articles, seminars, and videos published and over 10 power supply patents granted or pending. Henry graduated from Virginia Polytechnic Institute and State University in Blacksburg, Virginia with his masters and Ph.D. degrees in electrical engineering. He can be reached at [email protected]

Kevin Scott works as a product marketing manager for the Power Products Group at Analog Devices, where he manages boost, buck-boost, and isolated converters, LED drivers, and linear regulators. He previously worked as a senior strategic marketing engineer, creating technical training content, training sales engineers, and writing numerous website articles about the technical advantages of the company’s broad product offering. He has been in the semiconductor industry for 26 years in applications, business management, and marketing roles. Kevin graduated from Stanford University in 1987 with a B.S. in electrical engineering. He can be reached at [email protected]