ROHM’s 4th generation SiC MOSFETs offer improved characteristics compared to the older generation, and at lower prices. Several applications in both, the industrial and automotive sectors can benefit from this.

For those who are not familiar with the latest developments in power electronics, it may sound a little strange that there are now components that are no longer manufactured on the basis of silicon but are made of silicon carbide. The material itself and the resulting production of semiconductors such as MOSFETs is significantly more demanding than in the case of silicon. However, SiC MOSFETs have established themselves in the market as a high-performance alternative to IGBTs and Si MOSFETs, despite all the technological hurdles that were initially present. They are used in various power electronic circuits that rely on high efficiency or where volume is a major consideration. Typical applications include switching power supplies, photovoltaic systems and motor drives for electric mobility. Especially for the latter, which have a great demand for semiconductors and performance, the requirements are being pushed ever higher. ROHM, one of the market leaders in the field of SiC MOSFET technology, is introducing a new generation that meets the increased requirements.

This is not only about the introduction of new MOSFET power semiconductors, but also the expansion of facilities for their production. With the new semiconductor plant at the Apollo Chikugo plant in Japan and the expansion of SiCrystal in Nuremberg, where silicon carbide semiconductor wafers are produced, ROHM is increasing the production capacity significantly. This is also supported by increasing the wafer diameter from 100 to 150 mm. With these forward-looking steps, ROHM anticipates future needs in order to offer a solid foundation for technical progress.

A New Generation of SiC MOSFETs

SiC MOSFET technology has constantly developed over the last few years and the hurdles seen in the early years are long gone. After ROHM was the first company to launch a SiC Trench MOSFET on the market in 2015, the further development of it now follows: the 4th generation. This shows clear advantages compared to the old technology: The increased current density leads to smaller chips (Rds,on -40% for the same chip area compared to the 3rd generation). In addition, ROHM has adapted the internal capacitances so that the component can switch faster and with less loss. The result: a modern component that meets the demands of our time.

The products planned with this technology cover a wide range. From unpackaged chips with different metallizations to discrete components in classic TO packages to modern and compact modules for electromobility. An overview of the newly developed products is shown in Table 1. This list is constantly being expanded to cover as many applications as possible in both the industrial and automotive sectors. The items listed are discrete components intended for either through-hole or surface mounting. Of these, packages with a source auxiliary connection, such as TO-247-4L and TO-263-7L are advantageous over the TO-247N package because the MOSFETs are optimally driven by the availability of the additional auxiliary connection, leading to a reduction in switching loss. The TO-263-7L is a great choice for an SMD mountable package. It offers a significantly reduced parasitic inductance and enables automated mounting in the SMD assembly process. If an extended creepage distance is desired in the package, the TO-247-4L package is the right one. This allows the creepage distance requirements according to the IEC 60664-1 standard to be met without any further measures such as potting. 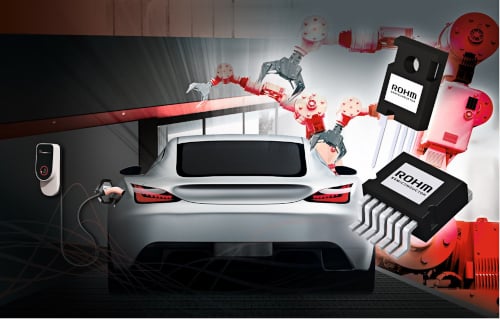 ROHM expands its portfolio of power semiconductors: The 4th generation SiC MOSFETs offer improved characteristics than the previous generations, and at lower prices. Several applications can benefit from this. Image used courtesy of Bodo’s Power Systems 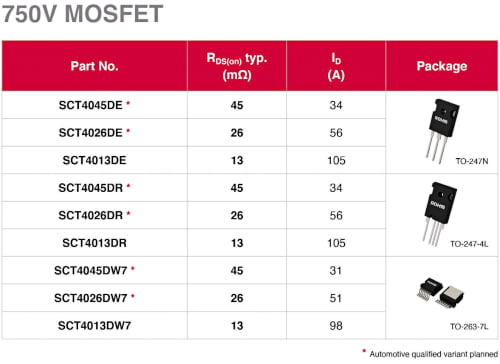 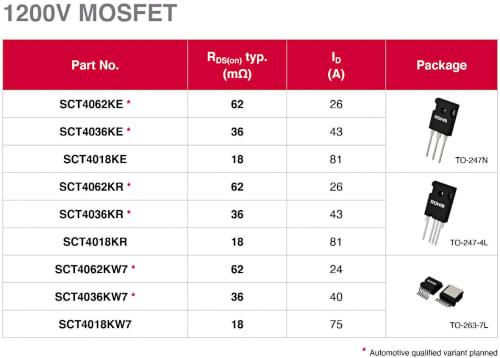 One of the limiting factors in reducing the Rds,on value is the shortcircuit ruggedness of the MOSFET. Smaller Rds,on values for the same chip size mean a higher load on the MOSFET in the event of a short circuit, unless countermeasures are taken at chip level. In the case of the 4th generation, the semiconductor structure was changed so that good short-circuit ruggedness of the components is achieved, which give commercially available fast gate driver ICs with DESAT function enough time to detect and safely switch off a short circuit.

Figure1 shows the current and voltage levels of the MOSFET SCT4036KR during a hard short circuit. In this case, the gate driver IC BM6112FV-C was used, which offers a short-circuit detection function via the drain-source voltage (classic DESAT method). The time to short-circuit detection in this case is 860 ns. In total, the short circuit takes approx. 1.6 µs until it is completely switched off without causing damage to the MOSFET. Thus, short-circuit shutdown can be performed safely and quickly with these components. 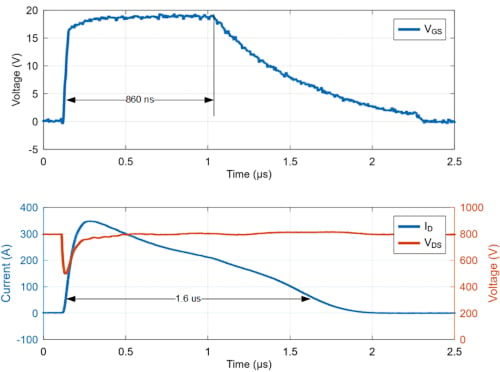 New technologies also bring new challenges when it comes to making the best use of them. For this reason, ROHM offers corresponding evaluation kits (EVKs). As the half-bridge configuration is one of the most common topologies in power electronics, two EVKs have been developed to deal with it. The surface-mount version is shown in Figure 2. This is a simple circuit. It contains MOSFETs, gate drive, backup capacitors and terminals. One EVK is designed for MOSFETs in THT packages (variants for TO-247-4L- & TO-247N), the other for SMT packages. The layout and component selection can be used as a reference for further designs. In the case of fast-switching components, special care must be taken to ensure that the layout, gate drive and support capacitors are optimally selected and arranged. If this is not the case, the components will be less efficient. 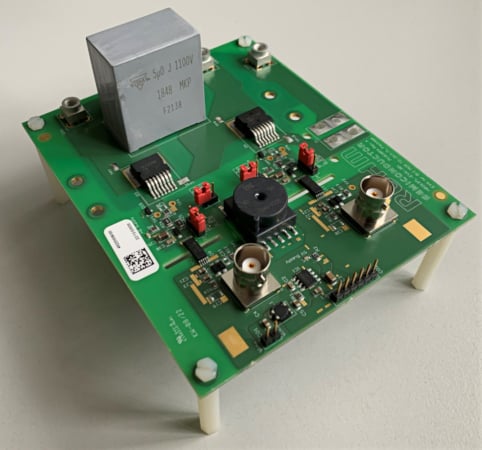 The EVKs offer the possibility to operate the switches as buck and boost converters or as single-phase inverters. Of course, it is also possible to operate only in pulsed mode to explore the dynamic behavior of the components under certain conditions. The gate control was realized with a simple IC, BM61x41RFV-C, which offers isolation, Miller-clamp and UVLO functionality. There are two different approaches for the auxiliary power supply: With individual flyback converters per switch based on the BD7F200EFJ-BE2 (THT EVKs), and with a self-oscillating half-bridge and transformer with separate secondary windings based on BU4S584G2 and BD62120AEFJ (SMD EVK). In both EVKs, it is possible to detect current characteristics of the switches by means of Rogowski coil or coaxial shunt resistor.

ROHM used the EVK for SMD switches as a buck converter to investigate the performance of the MOSFETs. The aim of this investigation was to determine what efficiency can be achieved when the SCT4062KW7 MOSFETs are operated at a switching frequency of 45 kHz. The input voltage was 800 V, the output voltage 400 V. The efficiency curve of the DC/DC converter at different output power is shown in figure 3. It can be seen that an efficiency of just under 99% is achieved at 2500 W. 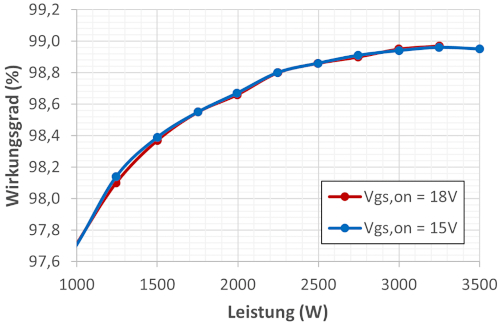 Two variants were tested: In the first configuration, a gate-source voltage of 18 V was used, as recommended in the datasheet. In addition, the measurement was repeated for a voltage of 15 V. Based on the curves, it can be seen that both modes of operation hardly differ from each other. Only the measured case temperature is slightly higher in the case of 15 V gate-source voltage. This means that the new generation of SiC MOSFETs can be used more flexibly because they do not necessarily need to be driven with +18 V, as was the case in the past.

The increasing market acceptance of silicon carbide MOSFETs shows that these components are an essential part of the technological development in power electronics. With the 4th generation, ROHM is contributing to this trend. Due to the improved properties of these MOSFETs, it is now possible to achieve even higher efficiencies and to realize more compact designs. In addition, ROHM’s latest generation offers more flexibility in the choice of control voltages compared to the previous generation.

To simplify the introduction of this technology, ROHM offers different evaluation kits. The designs included in them are also a good basis for developers who want to design circuits with these components. Short-circuit protection should also not be a problem for the developers, as this can be realized with common gate driver ICs.