The evolution of SiC technology in power modules and its principle loss reduction potential are shown in Figure 1. Mitsubishi has developed two new full SiC module types with 800A and 1200A rated currents and 1200V rated voltage [1]; [2]. This article is describing the 800A module. 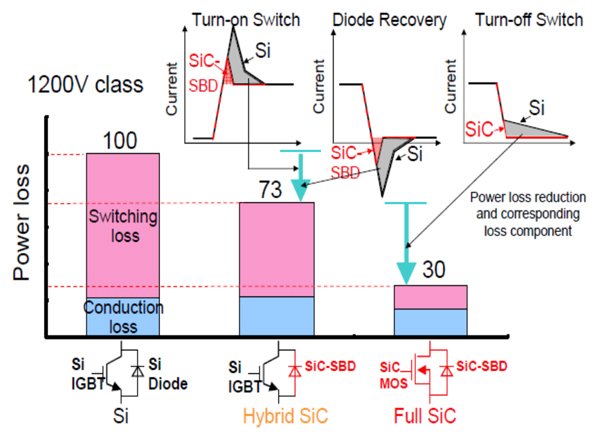 The appearance of new 800A/1200V full SiC module (type name: FMF800DX-24A) and its internal circuit diagram are shown in Figure 2. The module contains 2 x 400A half-bridge configurations. By externally paralleling the main P-, N- and AC-terminals an 800A/1200V 2in1 configuration is formed. By this paralleling approach, the internal package inductance LS has been decreased to less than 10nH, which is important for limiting the overvoltage spikes at chip-level due to high di/dt at switching of SiC-MOSFET.

For monitoring the baseplate temperature TC an NTC-sensor located close to the MOSFET/FWDi chips is incorporated into the module. For short circuit and overcurrent protection MOSFET-chips with on-chip current sensing are used in one of the half-bridge configurations (see Figure 2).

The main parameters of 800A full SiC module are shown in Table 1. The values of VDS, RDS(on) and VSD are given on chip level. 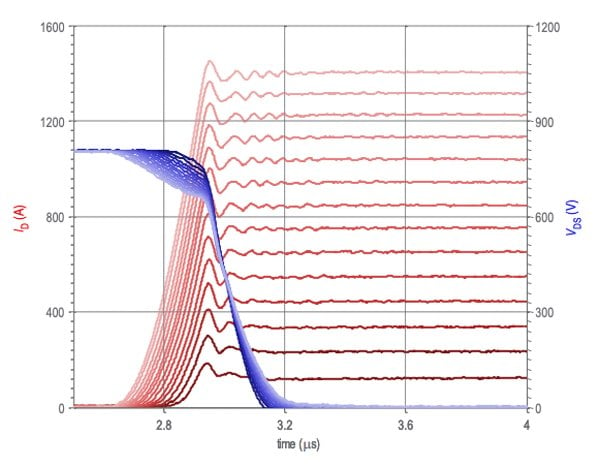 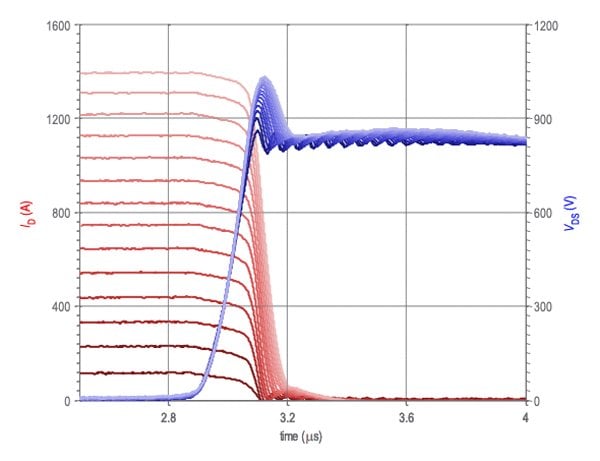 For limiting the turn-off overvoltage spike a cross-snubber capacitor of CS=6µF was connected between P- an N-terminals. The dependency of switching speed di/dt on drain current ID is shown in Figure 6 and 7 for different junction temperatures TJ=25°C; 75°C; 125°C; 150°C and different DC-link voltages VCC=600V; 800V. 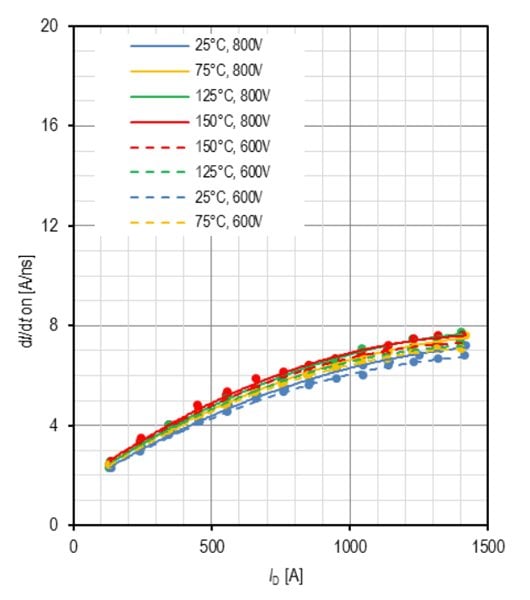 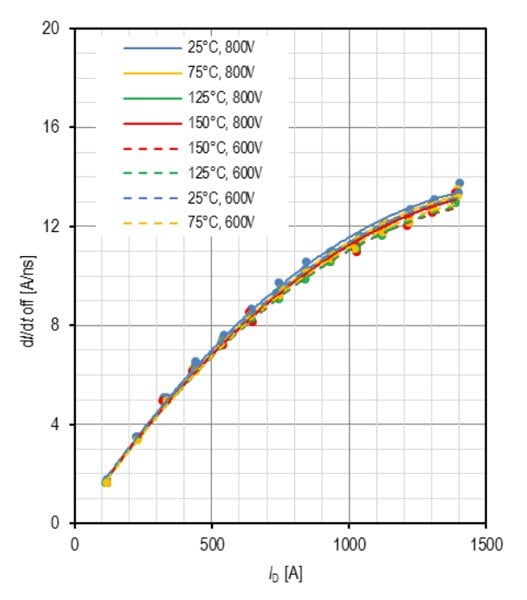 Two comments can be derived from Figure 6 and 7:

The typical forward characteristics of new 800A full SiC module and existing 800A Si-based IGBT module are compared in Figure 8. 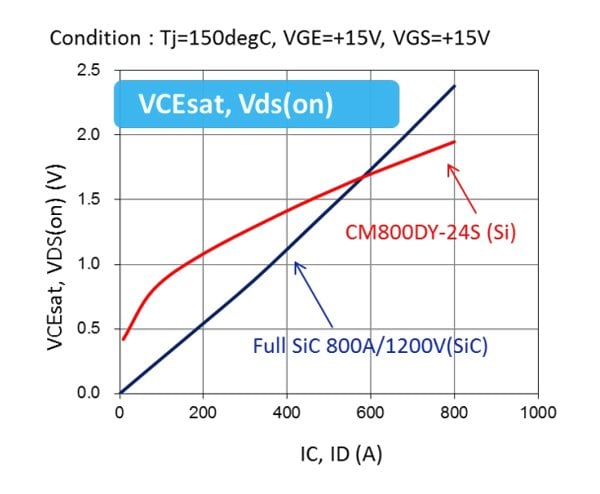 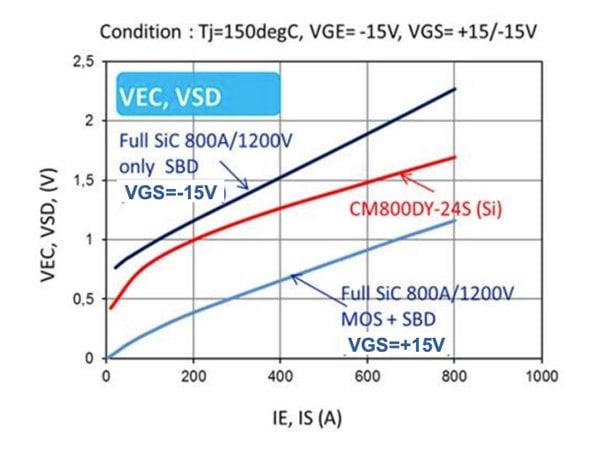 The comparison of switching energies in Figure 9 is indicating a key benefit of SiC technology: the switching losses can be drastically reduced compared with Si-based IGBT modules. 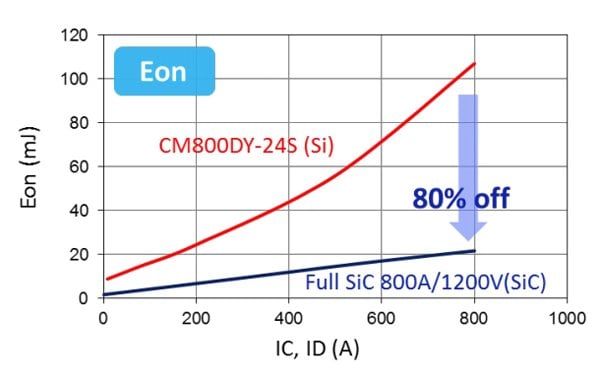 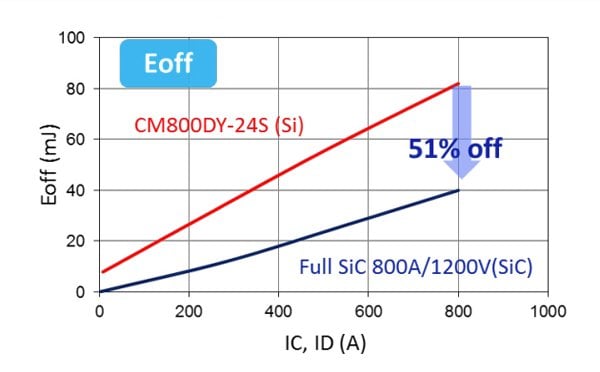 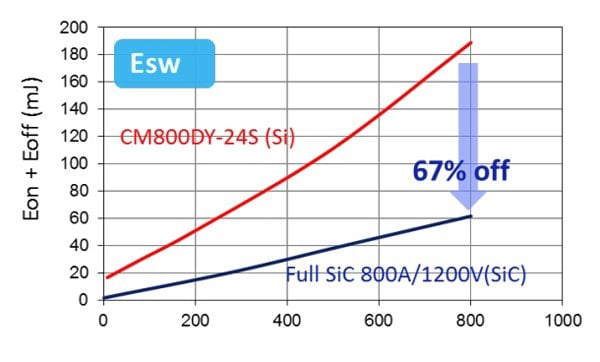 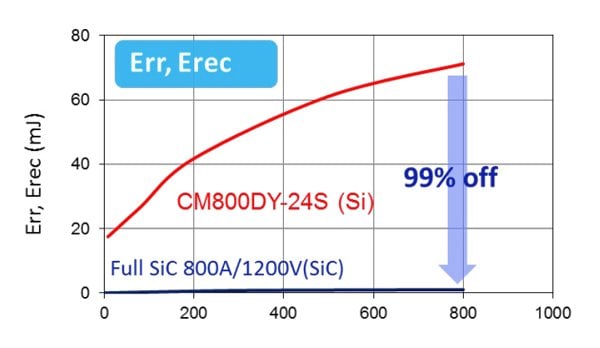 This benefit can be seen in the power loss simulation results per Transistor/FWDi-pair in inverter operation for two different PWM frequencies 15kHz and 30kHz and the corresponding temperature rise ΔT(j-c) in Figure 10 and Figure 11.

The total power loss can be drastically reduced (by 71% for 15kHz and 76% for 30kHz ) when full SiC-module is used. This loss reduction is mainly due to reduced switching loss. Conclusion: full SiC modules are very well suited for applications requiring high switching frequencies, where conventional Si-IGBT modules are reaching their thermal limit.

The new 800A/1200V full SiC-Module can withstand a short circuit current for a limited time of tSC(max)=2,5µs. This limit is given in the SCSOA specification.

For conventional Si-IGBT modules typically a short circuit capability of tSC(max)=10µs is specified. In such conventional IGBT drivers, a blanking time between desat-detection and SC-turn-off of typically to=1 3µs is installed, which is sufficient to ensure both: no false SC protection tripping and safe SC-turn-off.

Considering the relatively short tSC(max)=2,5µs specified for the new 800A/1200V full SiC-module another SC-protection method is proposed, known as RTC (Real Time Current Control). For this purpose one p-side and one n-side SiC MOSFET chip are equipped with a current sense electrode (refer to Figure 2). The equivalent circuit and the external view of this SiC MOSFET chip are shown in Figure 12. 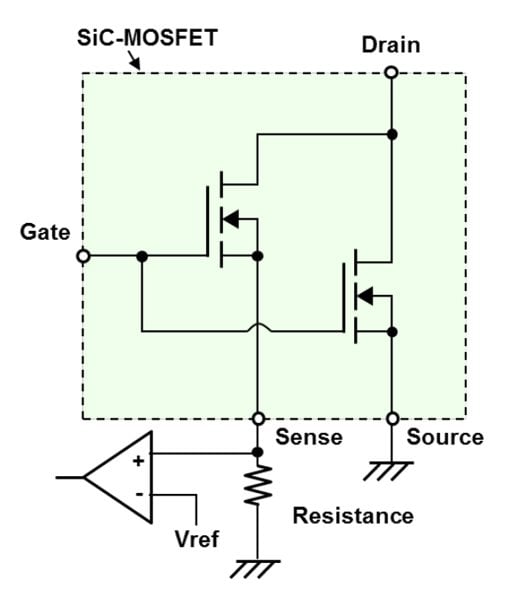 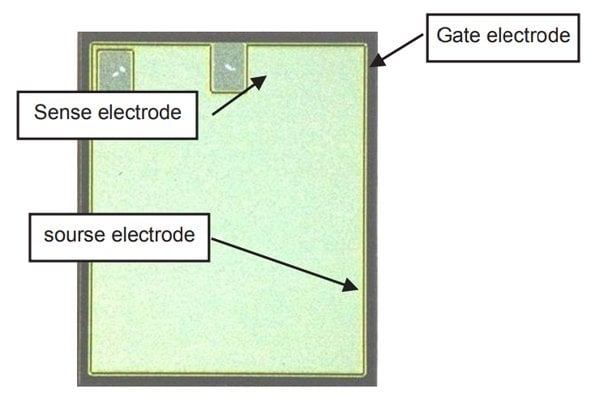 The functional block diagram of a dedicated gate driver for FMF800DX-24A using the proposed RTC protection is given in Figure 13. The measured short circuit waveforms during RTC operation are shown in Figure 14. 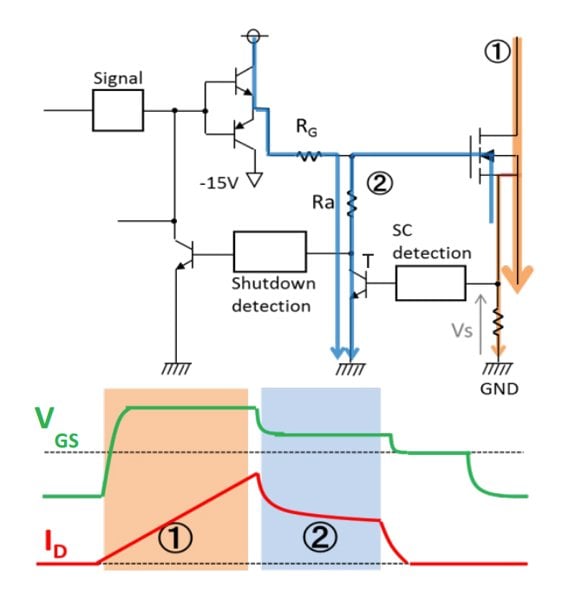 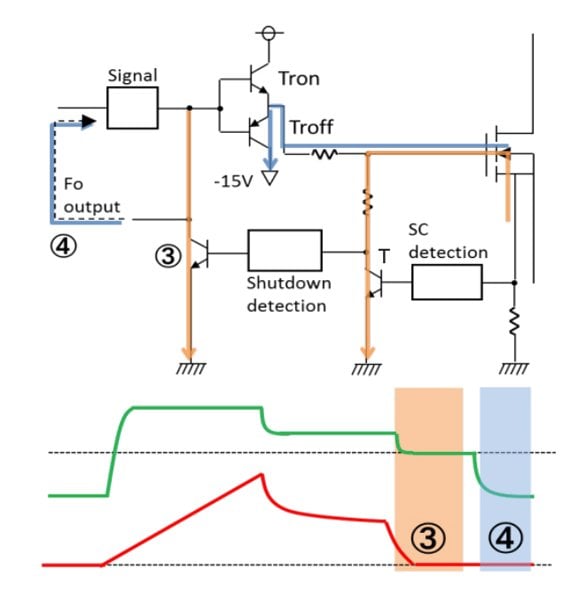 Figure 13: Principle of SC-protection by RTC 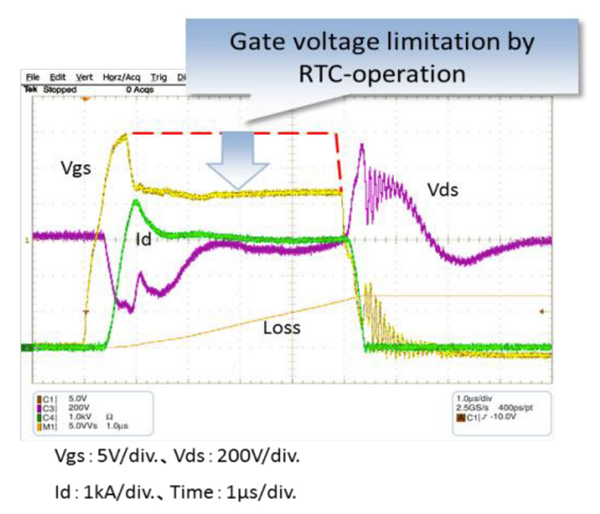 During SC-turn-off operation by RTC four modes can be distinguished. In mode, the main current ID is increasing until the voltage Vs across the shunt resistance is reaching a defined trip level. After reaching this trip level the mode starts: the transistor T is turned on and the Gate-Source voltage is reduced from +15V to about +7V resulting in a decreased SC-saturation current. Due to this SC-current reduction, the allowable short circuit time is increased again to the well-known from IGBT drivers tSC(max)=10µs. Means from now on the conventional IGBT gate driver timing can be applied. During phase, the gate driver transistor Tron is switched off and VGS becomes Zero thus causing a soft turn-off of the short circuit current. In the final phase, the driver transistor Troff is turned on thus applying a negative VGS to the SiC MOSFET in off-state.

Based on these features the new 800A/1200V full SiC module provides an interesting alternative to conventional IGBT modules in power electronic systems up to several 100kW, especially if one of the following system characteristics is of specific importance:

Eckhard Thal graduated from the Moscow Power Engineering Institute in 1980. Same year he joined ELPRO Berlin as a design engineer in the inverter development. In 1991 he received his PhD in the field of power electronics at the Chemnitz University. Since 1991 he is working for Mitsubishi Electric Europe (Ratingen/Germany) in application engineering for power semiconductors.