Wolfspeed has opened its Mohawk Valley Silicon Carbide fabrication facility in Marcy, N.Y. The 200 mm wafer fab aims to lead the transition from silicon to Silicon Carbide-based semiconductors. We had the chance to speak to Adam Milton, Vice President at the Mohawk Valley Fab at Wolfspeed.

Bodo: What was your initial plan to have the fab in New York?

Bodo: I know that Danfoss Silicon Power has also started a power module fab in New York a little while ago and needs die support. Are you working together?

Adam: At the moment, Wolfspeed is not working with Danfoss Silicon Power on specific technology or manufacturing.

Bodo: You have Lucid Motors with a multi-year agreement. Does Lucid use die or do you deliver packaged devices in discrete or module?

Bodo: Historically we have had General Electric, IBM and RCA / Harris in the greater region. Do you expect to recruit qualified workers here or do you plan to educate on the job?

Adam: Wolfspeed has and continues to recruit qualified workers to work at its Mohawk Valley Fab. Through scholarships and training programs, Wolfspeed looks to become a premier employee in the Mohawk Valley known not only for its innovation, but also its neighborly company culture.

Bodo: SUNY Poly and Mohawk Valley Community College are in that region to do support. There are more great Universities on the East Coast like Princeton and Yale just to name these. Are you planning to work with these possible opportunities as well? 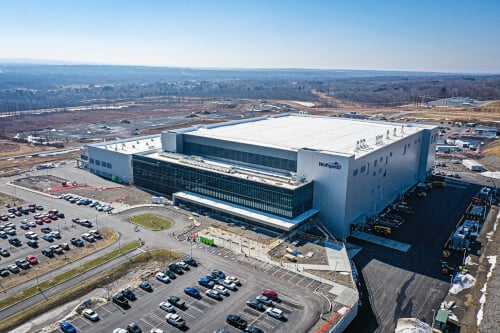 Adam: Wolfspeed recruits employees from across the U.S., with a particular focus on high-qualities colleges and universities across the Northeast and in the state of New York. Wolfspeed has already established strong ties with local universities and community colleges to create the strong leaders of tomorrow. As mentioned earlier, through scholarships and training programs, Wolfspeed looks to become a premier employee in the Mohawk Valley known for its innovation and neighborly company culture.

Bodo: I know from my friends in North America that it is normal to move from other states to new locations for work. Is it manufacturing in Marcy and R&D will remain in Durham, NC or do you have additional plans for the new site?

Adam: Wolfspeed is ahead of our set hiring goals, with more than 300 people hired to date.

Bodo: What is today’s projection of the wafer output in 2029?

Adam: We’re not able to share that information at this time but do know that the devices developed in Mohawk Valley will be critical in feeding Wolfspeed’s multi-billion dollar pipeline and the global semiconductor industry.

Bodo: Silicon devices have dominated for more than 50 years the design. Silicon Carbide is now the first choice in design. What will be in 50 years?

Adam: It’s hard to predict what will be the priority for engineers and designers in 50 years; however, more focus on energy-efficient power solutions has created opportunities for manufacturers across industries to consider designs that were more sustainable and rely less on traditional, less efficient silicon-based semiconductors. Although we are focused on the transition from silicon to Silicon Carbide, we continue to invest in R&D. We do believe that Silicon Carbide is, and will be, the key to more efficiently supplying the growing power electronics market, unlocking a new era of energy efficiency, so that technology works faster, easier, longer and better.

Bodo: Thank you very much, Adam, for your time. I look forward to seeing how Wolfspeed accelerates the transition to more efficient SiC technology in the future!