Power-electronic-converter developers continuously strive for higher converter power densities at the highest efficiency. This has become even more important considering the common goals for reducing CO2 emissions and the responsible use of electric energy and materials. To achieve further improvements, especially in the DC/DC converter design, SiC power modules are considered key-enabling technology.

To increase power density, it is common practice to design power converters for higher switching frequencies.

Intro to DC/DC Converters and Applications

In many applications, higher switching frequencies lead to smaller filters with reduced inductance and capacitance values. Particularly for applications with 16.7 Hz, 50 Hz, or 60 Hz transformers, the optimization potential is huge since the size and weight of transformers strongly depend on their fundamental operation frequency. This explains the motivation of engineers to transform AC voltages indirectly through high-power DC/DC converters, which provide galvanic insulation via a medium-frequency transformer. Such Solid-State Transformers are discussed for grid and railway applications.

For the high-power DC/DC converter, a Dual Active Bridge (DAB) topology is chosen. It offers galvanic isolation, bidirectional power flow, and soft-switching capability. The basic equivalent circuit diagram is shown in Figure 1. It consists of four half bridges (HB) interconnected by a medium frequency transformer (MFT). Depending on the setup, an auxiliary inductor in series to the transformer might be necessary, or the transformer itself, with its natural leakage inductance, is sufficient to provide the inductance Lσ. The power flow of the DAB is controlled by changing the phase shifts of these four half bridges. The resulting control parameters are the phase shift angles δ1, δ2, and \(\varphi\), as shown in Figure 1. This general modulation is called Triple Phase Shift (TPS). The most commonly used TPS modulations are the triangular and trapezoidal modulations.

However, in this paper, only Single Phase Shift (SPS) as the simplest modulation scheme is used. For SPS, the phase shifts within the full bridges (HB1 to HB2 and HB3 to HB4) are equal to zero (δ1 = δ2 = 0), and the power flow is only controlled by the phase shift \(\varphi\) between DC1 and DC2 side. The transferred power can be calculated according to (1) and (2).

The maximum transmissible power for the DAB in SPS operation can be calculated from (2) and is achieved for \(\varphi=\pm^{\pi}/_{2}\).

It can be observed that the stray inductance of the AC circuit is a critical design parameter to achieving high power of the DAB. With a fixed switching frequency, it limits the maximum power throughput. 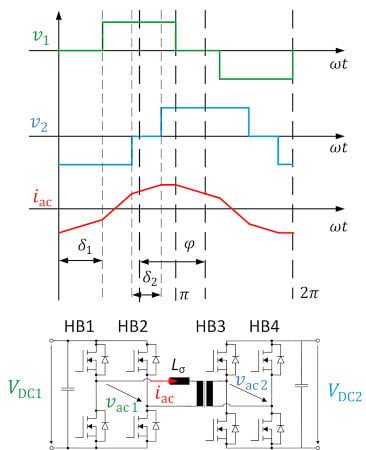 Hardware Setup of the DAB

To characterize the DAB at high power, the test setup in Figure 3 has been built. The core of the power electronics is the 1200 V / 1200 A FMF1200DX1-24A SiC MOSFET half-bridge module. It has integrated short-circuit detection and protection.

As a core material for medium-frequency transformers, nano-crystalline material is often used since it provides high saturation flux density and low losses. However, the transformer in the presented DC/DC converter has a core made of ferrite, which offers a cost-effective solution even compared with a low-frequency transformer. That ferrite core material can be used in such 500 kW converter is enabled by the low switching losses of the SiC power modules and the resulting high switching frequencies. Furthermore, the transformer uses a strip winding for low leakage inductance and forced air cooling. The medium-frequency transformer and its dimensions are shown in Figure 2. The resulting leakage inductance and magnetizing inductance, as well as the DAB parameters, are shown in Table 1. The leakage inductance is a crucial parameter. It limits the rate of current rise in the case of VDC1 ≠ VDC2. Furthermore, according to (3), it must be lower than 3.5 µH to avoid power derating at given DC/DC converter parameters. 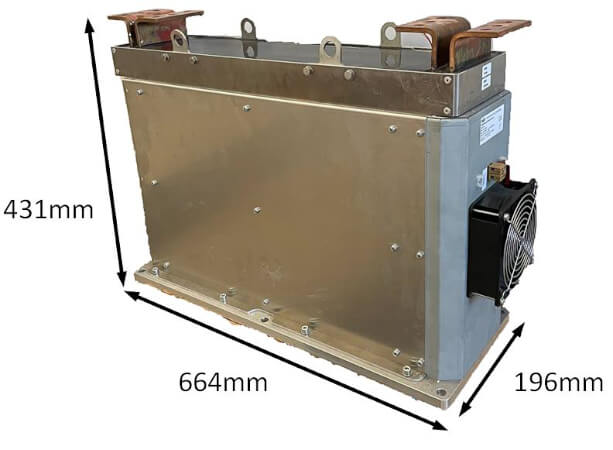 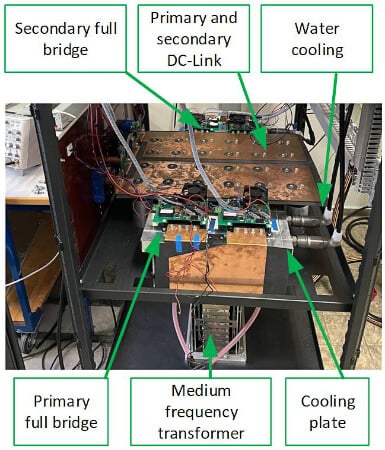 To measure the semiconductor losses, a calorimetric measurement system for the DC1 and DC2 side full bridge is implemented. The inlet temperature Tin and outlet temperature Tout as well as the water flow rate Q in each full-bridge cooling plate, is measured separately. With the heat capacity Cp and the density of water ρ, the losses for all full-bridge switches can be calculated according to (5). The overall measurement setup is shown in Figure 6. DC/DC converter input and output are connected and supplied by one power supply. The power drawn by the power supply corresponds to the losses of the DC/DC converter. Hence, accurate power loss measurement of the DC/DC converter is possible. The calorimetric measurement further breaks down between DC1- and DC2-side power module losses and transformer losses.

The experimental results are obtained on the hardware setup previously described and as depicted in Figure 6. For these measurements, only the transfer ratio of one (VDC1 = VDC2) is investigated. The specifications of the prototype are given in Table 1. Measurements were done up to Pout = 504 kW and up to VDC =800V to evaluate the performance.

In Figure 4, the efficiency of the DAB over the transferred power is illustrated. The maximum efficiency is reached for Pout = 110 kW and VDC = 500 V of η=98.24 %. For operation points with low output power, Zero Voltage Switching (ZVS) is not achieved, and efficiency drops accordingly. The calorimetric measurement allows the further breakdown of different loss components. Hence, Figure 5 shows the losses of the DC2-side power module. The power rating, where ZVS is achieved, is clearly visible as power module losses become minimal. 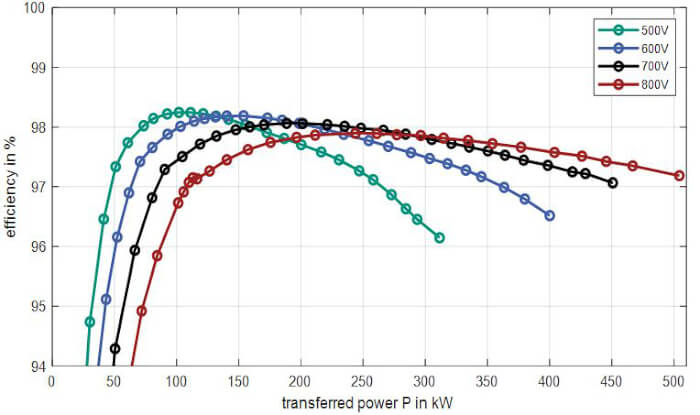 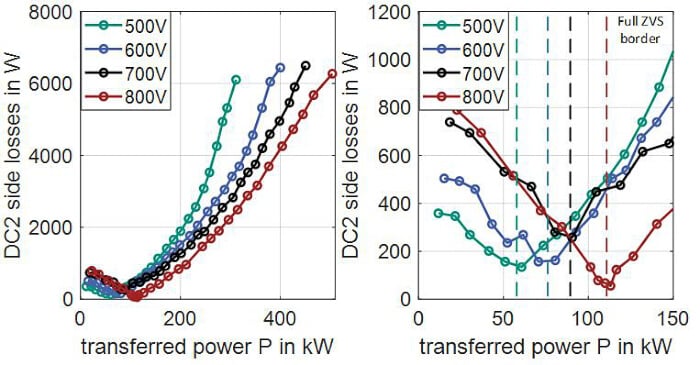 As shown in the previous chapter, SiC power modules have enabled a 500 kW DC/DC converter to operate at a switching frequency of 20 kHz. For the regarded converter design and its medium-frequency transformer, it was possible to use ferrite core material which has lower core losses compared to conventional silicon steel and is more cost-effective compared to nano-crystalline core material. This game changer was enabled by a 1200 V/1200 A SiC industrial power module from Mitsubishi’s 1st Generation, which has been used in this project.