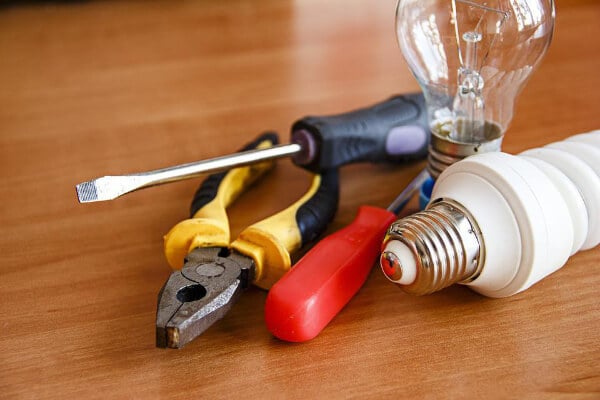 Notably, to lessen occupants’ exposure of dwelling units, hotels, motels, and similar residences to electric shock, the NEC limits the supply voltage to permanently mounted luminaires and receptacles for cord-and-plug-connected appliances and portable loads to 120 V.

In general – for all buildings or premises – circuits of a maximum of 120 V between conductors may supply.

a. Lamp holders within their voltage ratings. A typical screw-shell type lamp base is medium-base or “Edison.” A popular name for a lamp holder is “socket.” See figure 1. 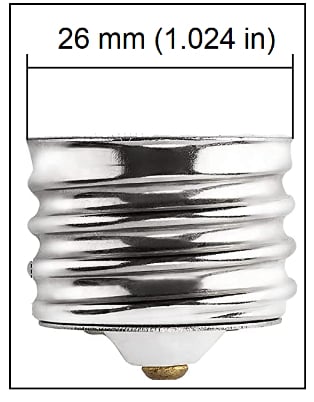 b. Auxiliary equipment for starting the electric-discharge lamps – unique accessories to make the lights work – such as fluorescent and high-intensity discharge (HID).

There are three types of appliances:

b. LED luminaires with LED drivers between the branch circuit and the lamp holders.

c. Incandescent or LED luminaires equipped with medium-base or smaller screw-shell lamp holders. The lamp holders are supplied at 120 V or less from the output of a stepdown autotransformer, LED driver, or another power supply integral component of the luminaire.

Connect the outer shell terminal to the circuit’s grounded conductor. 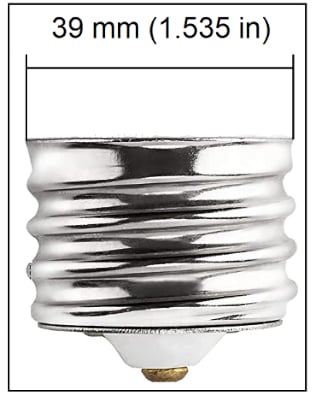 e. Luminaires equipped with other standardized kinds and sizes of lamp bases applied within their voltage ratings.

Listed denotes Underwriters Laboratories® (UL) – one of the most famous testing laboratories – listed materials and equipment. UL tests an item and records it in a book if it meets the safety standards. Their stamp on electric materials is synonymous with “proved good.”

Examples of cord-and-plug-connected appliances and fixed appliances are 277 V heaters (larger than 1 440 VA) in large buildings and fryers in restaurants.

Covers permissions for circuits above 277 V to the ground and not more than 600 V between conductors. They may supply:

a. The auxiliary equipment of electric-discharge lamps mounted in permanently installed luminaires on poles or equivalent assemblies.

The height requirements are:

b. Utilization equipment, other than luminaires, permanently connected or cord-and-plug-connected.

c. Luminaires powered by direct-current systems. The luminaires must contain a listed, dc-rated ballast. If the luminaires have provisions for changing lamps, the ballast must provide isolation between the dc power source and the lamp circuit and protection from electric shock.

NEC Section 210.8 requires and rules the installation of ground-fault circuit-interrupter protection for personnel in several locations.

The GFCI is safety protection, mainly when operating electrical equipment outdoors and in wet spots while standing on the ground.

In a 2-wire system, currents in the ungrounded and grounded conductors are identical. If the wiring, appliance, or tool insulation fails, it will allow some current to leak into the ground. When it happens, a GFCI will detect the difference in current in the two wires and will trip the circuit if the fault current exceeds the trip level – between 4 mA and 6 mA. The disconnecting time is about 1/40 s.

Most likely, the fault current will not be enough to trip a circuit breaker or blow a fuse, exposing personnel to an electric shock. The GFCI will not prevent a person, part of a ground-fault circuit, from receiving a shock or causing a derived accident – like a fall – yet it will inhibit damaging current levels through the body.

A GFCI disconnects a circuit in the event of a ground fault. However, it does not protect against phase-to-neutral or phase-to-phase contacts.

There are three types of GFCIs: 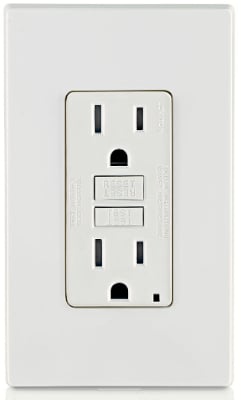 A Receptacle/Outlet GFCI incorporates RESET and TEST buttons. The RESET button arms the GFCI, after clearing the fault, for future defects. The TEST button simulates a fault to check that the GFCI is working right.

A GFCI does not require an equipment grounding conductor (EGC).

The NEC requires GFCIs in the following locations:

One critical requirement is to locate the GFCI in a readily accessible location.

The AFCI detects arcing (sparks) between and along damaged wires or contacts – the sparks may cause fires.

When an AFCI detects a current imbalance of about 30 mA or a waveform anomaly indicative of an arcing fault, it opens the circuit – arcing faults have identifiable waveform characteristics.

There are two types of arcing failures:

There are three types of AFCIs: 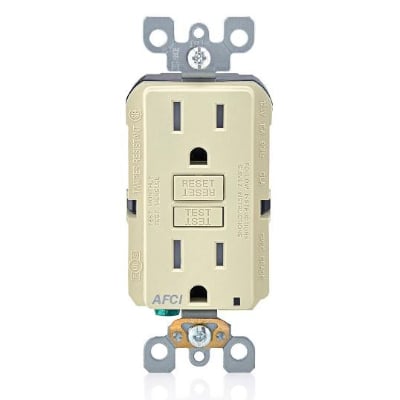 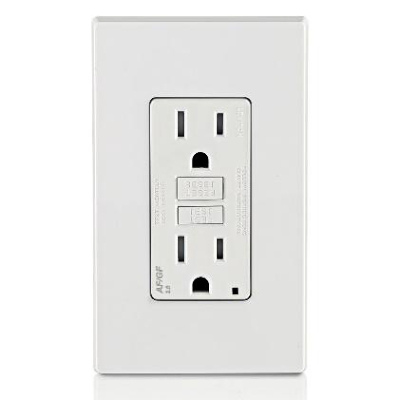 Though they look similar, GFCIs and AFCIs have different tasks. AFCIs complement the protection offered by GFCIs against electrical shock, electrocution, and property loss. In essence, AFCIs prevent fires, and GFCIs avoid electrocution.

AFCIs and GFCIs work independently – it is viable to install an AFCI breaker on a branch circuit having GFCI receptacles.

The NEC requires AFCIs installed on most branch circuits that supply outlets or fixtures in new constructions and revamp.

The following locations require an AFCI:

One essential requirement is to locate the AFCI in a readily accessible location.

The NEC presents mandatory rules regarding voltage limitations and the use of GFCIs and AFCIs in branch circuits.

AFCIs and GFCIs complement themselves to offer protection to people and property. AFCIs prevent fires, and GFCIs avoid electrical shock and electrocution.