This article discusses a new approach for prototyping using Imperix's BoomBox RCP platform and its application as well as its integration to the industry.

When it comes to power electronics prototyping, everyone has their own practices involving their preferred power and control hardware. However, does anyone really know what the hidden costs are behind such prototyping hardware? And what the alternatives are?

In particular, prototyping activities are not only often time-intensive, but also require dedicated hardware and software, which are linked to high internal maintenance costs. On the other hand, these activities are generally indispensable to completely assess the industrialization potential of a future product or idea. Indeed, general-purpose simulation tools are often unable to completely highlight all the typical real-world challenges related to sampling, synchronization, limited measurement accuracy, noise, etc.

When building prototypes, three approaches are widely used: either relying on some self-made prototyping hardware, relying on commercial development kits or finally re-using hardware from existing product lines. Independently from the pros and cons of each approach (see our observations in Table 1), we noticed that all three imply much underestimated and constant development efforts and costs. One typical example of hidden costs are the efforts required to keep hardware, software, internal documentation, and team knowledge up-to-date. This is especially true for the users of development kits, who are often deemed to focus on low-level programming rather than on their real work: the control of power electronics. 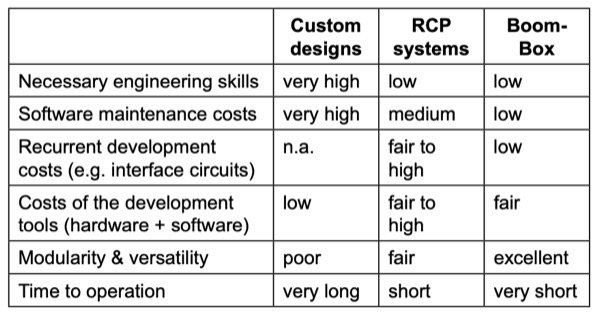 Table 1: Comparison of the observed costs in a typical research and development environment

More generally, performing power electronics prototyping with untailored hardware leads to longer engineering times, for example, to continuously adapt it to new converter setups: designing new analog interfaces, expanding I/O capabilities, designing software/hardware safeties, converting/optimizing the firmware, etc. If improving the traditionally low reusability of such prototyping hardware is a must, it is often incompatible with the time and cost constraints imposed on academic and industrial R&D teams.

Recently, imperix Ltd. released its BoomBox RCP platform in order to provide R&D engineers with a truly tailored tool for the development of power electronic converters and systems. The BoomBox controller provides a new experience of prototyping, by allowing the engineers to jump straight from the simulation to a real hardware implementation thanks to its software-independent protections. These react on overvalues within a few microseconds and immediately block the entire application. With this safety layer enabled, R&D engineers can instantly try and implement new control schemes on hardware, without the risk of damaging it, thus shortening the total development time and efforts.

The BoomBox RCP is built around a powerful and versatile DSP+FPGA combination, providing the user with a powerful processor, as well as peripherals tailored for power electronics prototyping, developed and thoroughly tested at imperix during the previous years. Compared to traditional approaches, there is no longer a need to optimize software or to dig into tons of documentation to get a converter prototype running.

Several BoomBoxes can also be tied together to easily expand the number of I/Os for the most ambitious implementations. This makes it a modular and I/O intensive control platform, addressing all innovative modular setups such as MMC, CHB… Even in such complex converters, all-time delays between data sampling and modulation are continuously mastered, even in the case of particular modulation patterns or interleaved operations.

Unlike development kits, the BoomBox RCP embeds a custom operating system that provides convenient access to power electronic function libraries, whilst guaranteeing at any time the critical real-time operation of the user code. Those functions (modulation, acquisition, controllers, etc.) are either accessible through efficient C/C++ programming, or through automated code generation from several well-known simulation software. A growing library of application examples and tutorials that rely on such libraries can be freely accessed online.

Building a converter and turning it into a working prototype is one great step. The (potentially huge) remaining work is all about getting results out of this, which can be a burdensome task. For this particular need, BoomBox Control is shipped with the control platform. This user-friendly GUI facilitates debugging and helps with obtaining results during development. All variables can be monitored and altered while the code is running and can also be sent to the analog outputs to be viewed live on an oscilloscope. A data logging module provides a visual interface, where data can be exported directly to MATLAB or Excel. Additionally, validating the control loops and algorithms could not be easier with the provided transient generator. 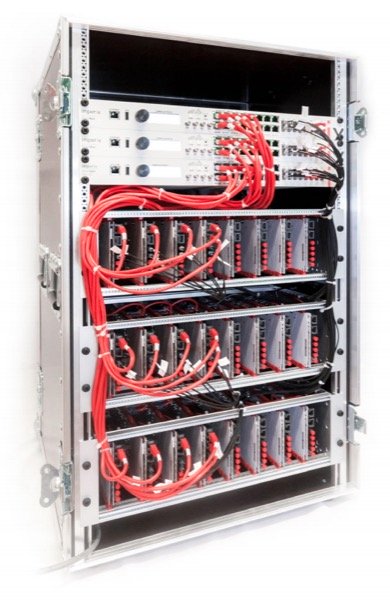 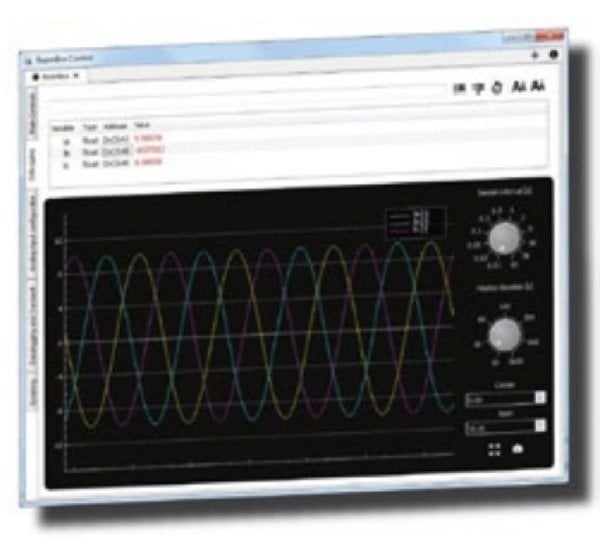 The hardware interfaces are tailored for power electronics whilst also remaining open and flexible: semiconductor switches are controlled using standard fiber optics, while inputs provide configurable and highly EMI-immune differential connections for analog measurements. Interfacing the BoomBox RCP to any custom or industrial power stage or sensor solution is completely supported. Nevertheless, for use in situations where a complete package is needed with a tight schedule, imperix provides some accessories which ideally complement the BoomBox philosophy and enable the user to get a power conversion setup running in no time. 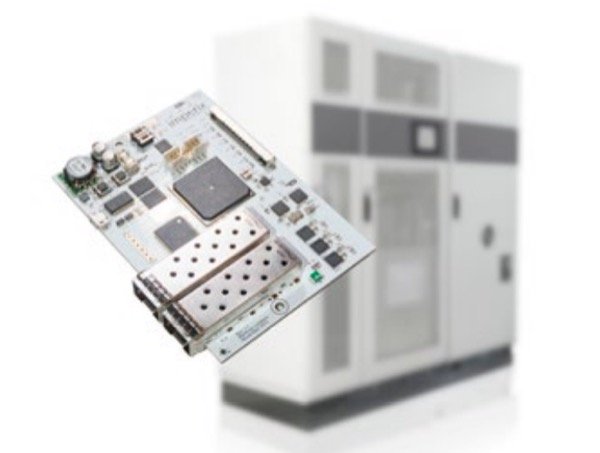 For example, some rack-mountable power modules are available. Those are embedding half-bridge or full-bridge IGBTs, gating circuits, sensors and capacitor banks for assembling and running a converter without needing to design PCBs. Some external DIN-rail mountable sensors can also be quickly and easily connected to the BoomBox RCP to measure external parameters, such as grid voltages and currents.

Initially intended for power electronics development within R&D teams, the BoomBox RCP can also easily be integrated into a production converter thanks to its standalone mode, which makes the PC connection dispensable. Moreover, high speed CAN interface can be used to easily exchange set points or measurements with other industrial equipment such as sensors, actuators or even SCADA units.

For a more cost-effective industrial approach, imperix provides a development service that aims to supply its industrial customers with a cost-optimized and tailored control hardware (example on Fig. 6) that is fully compatible with the code that has been developed on the BoomBox RCP. Indeed, the BoomBox operating system provides full hardware independence over time and hardware. Imperix is thus capable of bridging R&D activities and industrial products within a simple and efficient control hardware ecosystem.

Immediately available, the BoomBox RCP is packaged in two versions. The standard edition provides all the tools required to run standard converters, up to 16 measurements and 16 gating signals. To deal with more complex converters (e.g. multilevel) that require more I/Os, the expert edition is required, which enables the use of I/O expansion boxes. Both variants are provided with a lifetime license including the C/C++ programming environment, a visualization software, as well as 1-year of free software upgrades. For academic customers, imperix provides privileged conditions, including rental options.

Simon Delalay works is the Managing Director and Co-Founder of Imperix, a Swiss company established in Sion, Switzerland. Its name is derived form the Latin verb imperare, which means controlling — or ruling — and refers to the company’s core business: the control of power electronic systems. Simon is particularly skilled in the field of power electronics, power systems, and embedded systems as well. He has already achieved 6 publications throughout his career. He holds a Master's Degree in Electronics at the Swiss Federal Institute of Technology Lausanne.

Matthias Lamber works as the Development Engineer at Imperix, Lausanne Area, Switzerland. He is specialized in the field of Altium Designing, NI LabVIEW and Matlab. He has accomplished 2 projects throughout his career. He earned his Bachelor's Degree in Electrical and Electronics Engineering at Swiss Federal Institute of Technology Lausanne. He also holds a Master's Degree in Electrical and Electronics Engineering from the same institution.

Nicolas Cherix is the Chief Scientist and Co-Founder of Imperix. He is specialized in the field of power electronics, multi-level converters, and energy storage. He earned his Bachelor's and Master's Degree in Electrical and Electronics Engineering both at the Swiss Federal Institute of Technology Lausanne. He then acquired his Ph.D. in Energy from the same institution as well.