LinPak, the Standard Expands to 3300V and Shows Excellent Parallel Operation as well as SiC Readiness

LinPak, the Standard Expands to 3300V and Shows Excellent Parallel Operation as well as SiC Readiness

The LinPak module newly houses a state of the art low loss 3300V chipset. This means also applications in the medium voltage range will benefit from the record low stray inductance LinPak standard and especially from the scalability of the current rating thanks to excellent parallel operation. Also, the operation of SiC switches becomes possible for larger current ratings thanks to the low overall inductance.

The technical advantages and the modularity offered by the open LinPak standard are receiving a very positive response from the market and it is nice to see that more manufacturers step in offering LinPak compatible solutions.

This article presents general module design considerations and first results on switching characteristics of the 3300V 2 x 450A rated LinPak module and the parallel connection of two 1700V, 2 x 1000A rated LinPaks. Furthermore, the first results with a 1200V full SiC MOSFETs are shown.

Today’s high power IGBT modules with the typical footprint of 140mm x 190mm in single switch configuration reaches or has reached its limits. New fast switching chipsets like the 1700V SPT++ IGBT [2] or even 3300V SPT+ IGBT, that allow switching with low losses require low commutation loop stray inductance to keep the voltage overshoot small [3]. If this holds true for silicon-based IGBTs, obviously SiC switches are no more useable in standard IGBT modules like 140mm x 190mm modules or similar designs. This is where LinPak steps in as the solution for the future. The LinPak power module is developed as a new open standard to overcome these limitations. The phase leg module is designed for easy paralleling. Different converter power output ratings can be achieved simply by using the appropriate number of modules in parallel. With its low module stray inductance of 10nH and the possibility to implement a low inductive bus bar equipped with DC-link capacitors, the voltage overshoot during IGBT turn-off can be reduced typically by a factor of 5 compared to previous solutions using 140mm x 190mm modules like the HiPak. The amount of terminal connection area per rated current is doubled compared to HiPak, which obsoletes the need of bus bar cooling. The combination of the well established AlSiC base plate and AlN substrates with a reliable particle-free ultrasonic terminal welding process makes the LinPak ideally suited for applications with demanding power cycling requirements. 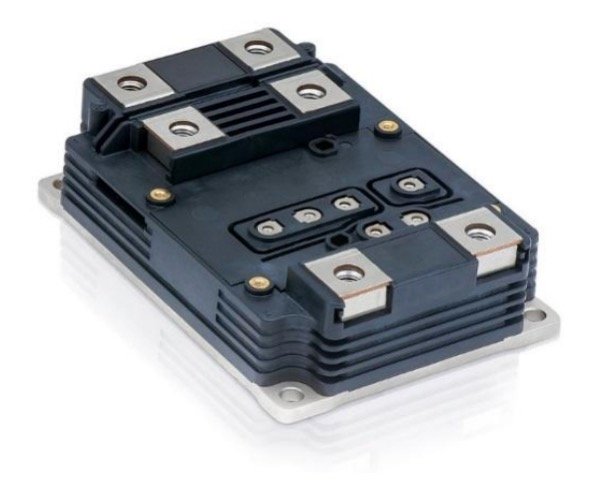 A new feature to standard high power IGBT modules is the built-in NTC temperature sensor. It can be used to detect failures in the cooling system or to derive the chips’ temperature. 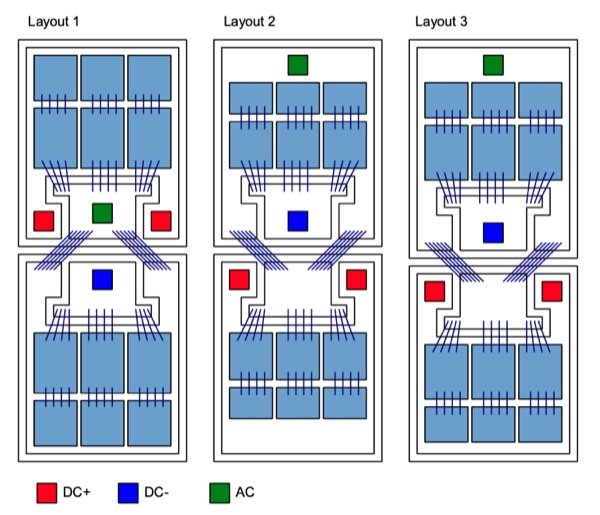 Figure 2: Three design concepts for a low inductive half-bridge module. Only two of four substrates are shown per variant.

For a pioneering power module design, many aspects need to be considered: high current rating, high reliability, good manufacturability, low cost, low thermal resistance, low inductance, stable electromagnetic behaviour and many more. The optimum arrangement of the power terminals for easy paralleling and low inductance bus bar design is already given [1]. The LinPak power module shown in Figure 1 implements this layout. For realization of the internal power circuit layout, three concepts have been considered for the LinPak. These three layouts are shown in Figure 2. For each layout, only two of four AlN substrates used within the module are shown. The further two substrates are identical and in parallel to the shown two substrates.

The first layout is used in the LinPak module. All terminal plates are connected to the substrates in the middle of the module. For the second and third layout, the AC terminal plates are connected on the AC side of the module. This allows a shorter AC path with slightly lower resistance, but additional area is needed for the AC terminal connection. In the second layout, identical substrates are used for the top and bottom side switches, therefore the same area is lost also on the bottom side switch. The third layout is realized using two different substrate layouts for the top and bottom side switches, therefore the AC terminal connection area is needed only once.

The difference in AC terminal connection area needed, strongly influences the area remaining for the power semiconductors and with it the achievable current rating. A comparison of the silicon area available is shown in Figure 3. In comparison with the Layout 1, Layout 2 and 3 take up only 77% and 89% silicon area. With Layout 1, the LinPak achieves a current rating of 1000A based on SPT++ IGBT technology [1], future modules using enhanced trench (TSPT+) IGBT technology have the potential to reach 1200A or more in the 1700V class.

The silicon area also influences strongly the thermal resistance. Using finite element analysis the three layouts are compared to each other (Figure 3). The Layout 1 with 27.2K/kW has a considerably lower thermal resistance than the Layout 2 with 33.6K/kW.

A further advantage of layout 1 is seen in a reliable ultrasonic welding process for connecting the power terminals to the substrates. Ultrasonic welding is known as a reliable connection when it comes to thermal cycling load, but the technology also poses two challenges: the generation of particles during the welding process and the possibility of crack formation in the ceramic insulation. The particle challenge is addressed by having all welding connections located at some distance to the semiconductor chips, which are very sensitive to particle contamination. Additionally, particle removal is implemented in the welding process. The extremely low levels of particles in the LinPak would not have been achievable with layout 2 or 3, where the AC terminal feet are located very close to the semiconductor chips. The insulation integrity challenge is mastered by having the welding pad on the substrate large enough which is reasonably possible only with layout 1. The distance between the welded terminal foot and the copper edge of the welding pad is found to be a critical design parameter. Together with carefully chosen process parameters, cracks in the aluminum nitride ceramic are successfully prevented in the LinPak module. 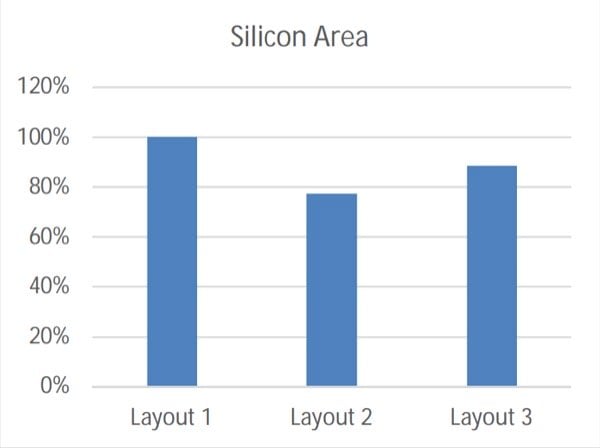 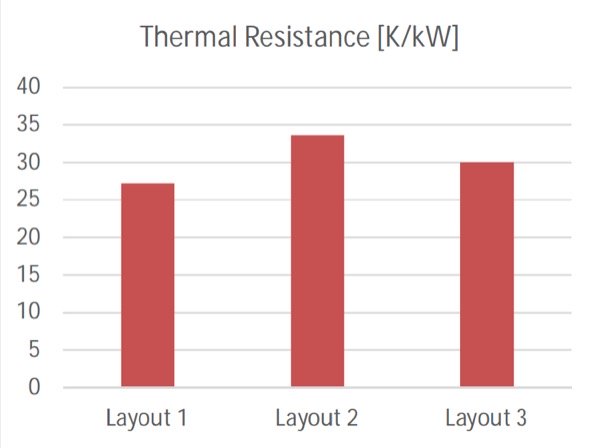 The scalability of the LinPak module is based on the easy paralleling capability. This means paralleling has to be possible with minimal derating. In principal, the amount of paralleled chip-area remains the same, independently whether for example three LinPak modules are paralleled or a single HiPak2 module is used. The distinct differences are:

For a) as well as b) it is clear that a proper design of the module and the circuit design including DC-link and Gate-Driving are crucial. In case of the LinPak the circuit design, however, is pretty much given by the module concept and with minimal effort very good current sharing between the modules can be achieved. The current sharing in case of paralleled LinPaks is better than the sharing within many existing modules available on the market. Here kicks in c), wherein most cases it is very difficult to impossible for the users to measure or even estimate the internal current imbalance of the power modules. Usually, just the measured overall losses or datasheet values are used for thermal calculations and no derating due to current imbalance is taken into account.

In case of the LinPak first paralleling tests have been conducted with two modules in parallel. Figure 4 shows the current sharing during IGBT turn-on at nominal conditions. The turn-on wave shape is chosen as an example since the impact of gate-emitter voltage distortion due to parasitic electro-magnetic coupling is mainly visible during IGBT turn-on. This comes from the fact that the turn-on current characteristic follows the transfer characteristic and thus, it is under the influence of the gate-voltage distortion. During turn-off, the gate-voltage shape has minimal impact on the current hence even with less ideal connection symmetry usually the current sharing during turn-off is within acceptable limits. 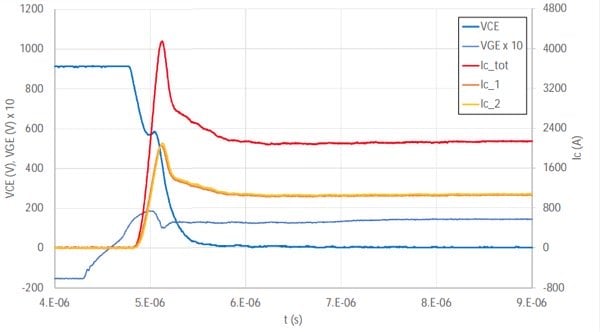 Results of 1700V, 2 x 1000A LinPak phase leg single modules have been already presented [1] and they showed that a reduction of up to a factor of five in turn-off over-voltage can be achieved compared to standard (190 x 140mm2) HiPak modules.

First LinPak modules using the well established low switching losses 3300V SPT+ chipset rated 2 x 450A in phase leg configuration are now available for sampling. Figure 5 shows the 3300V LinPak switching off at SOA conditions with a high DC-voltage of 2600V and a worst-case total stray inductance of 80nH. Despite the harsh condition, the turn-off event is very soft and the over-voltage is staying well below 3300V allowing for significant safety margin: 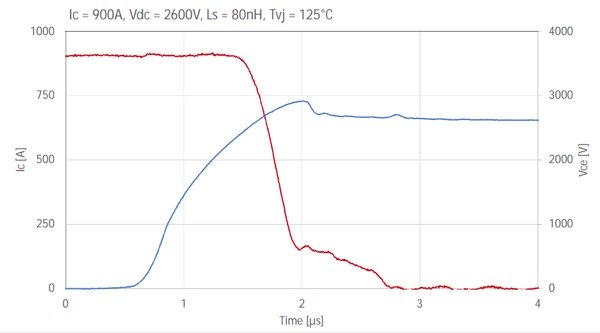 In order to demonstrate the capability of the LinPak design to operate with SiC MOSFETs, a technology driver using 1200V SiC MOSFETs, paired with SiC Schottky diodes has been built. The biggest challenge for a proper electro-magnetic homogenous design of a large current SiC module is the fact, that available SiC MOSFETs are limited in their size and current ratings. For the demonstrator we used 12 MOSFETs per switch, yielding in a 25°C nominal current rating of about 700A. A special substrate design was deployed to have a homogenous and low internal impedance while at the same time allowing to add a gate-resistor for each chip (Figure 6) [5]. 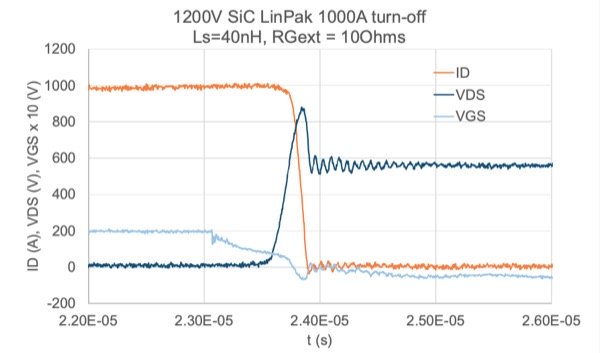 First results with switching up to 1000A show that the LinPak is well suited for SiC chips. Depending on the gate-resistor value, oscillation free turn-off can be achieved. Figure 7 shows the turn-off with an external gate-resistor of 10 Ohms. The waveform is free from oscillations and the over-voltage stays well within an acceptable level. At turn-on still some oscillations persists, despite the rather high gate resistance. Further optimisation work is on-going, however for economically viable high current modules, SiC MOSFETs with larger area are needed. 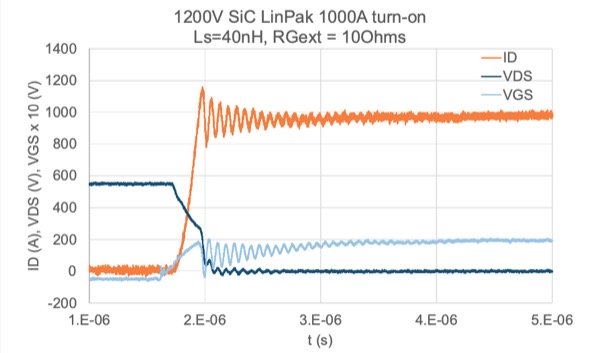 The LinPak is an emerging package standard making optimal use of today's and future low loss silicon-based IGBT chips. The LinPak allows for highly scalable converter designs thanks to its easy paralleling capability. This provides flexibility to converter manufacturers as the LinPak becomes the default building block for different ratings, resulting in a less diverse bill of material per converter product. Since the LinPak standard has by now been adopted by a multitude of module manufacturers, the converter producers have a solid base for second sources making the supply chain more sustainable. Last but not least the LinPak is future proof. We have demonstrated that the concept is capable to house silicon carbide base MOSFET switches and that the LinPak is able to control the very fast switching devices. ABB starts to serve the market with a 1700V, 2 x 1000A rated module as well as with a 3300V, 2 x 450A rated LinPak.

Samuel Hartmann has been with ABB Switzerland Ltd., Semiconductors, Lenzburg, Switzerland, as a Principal Engineer, where he is involved in the development of IGBT power module technology and products. He earned his Masters in Science degree in Physics from the Swiss Federal Institute of Technology, Zurich, Switzerland.

Fabian Fischer works as the Head of BiMOS R&D Modules at ABB, Lenzburg, Switzerland; responsible for technology and product development of power semiconductor devices. He is specialized in the field of materials science, SPC and project management. He holds a Master's Degree in Material Science at the Swiss Federal Institute of Technology in Zurich.