How to Operate a Transistor as a Switch

How to Operate a Transistor as a Switch

Transistor switches are vital to electronics in the switching of low DC ON/OFF where the transistor is operated in its cut-off or saturated state. Some electronic devices, such as LEDs, require a few milliamps to power on and can be driven by the logic gate outputs. However, high-power electronic devices such as solenoids, lamps, and motors demand more electrical power than the logic gate supplies. Enter transistor switches. 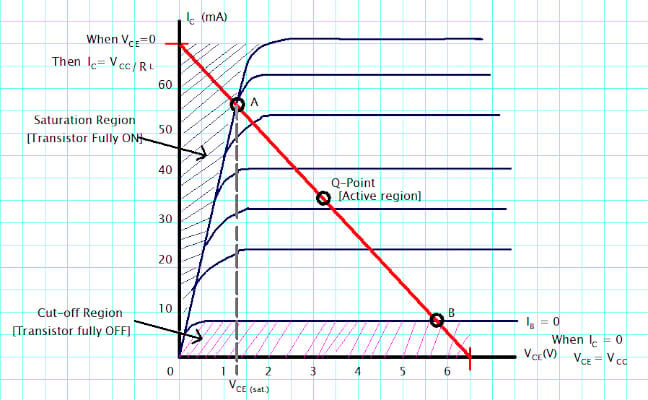 The regions are defined as:

• Saturation region. This is the region where the transistor will be biased for the maximum amount of base current to be used to achieve maximum current at the collector and minimum voltage drop at the collector-emitter and which in turn makes the depletion layer as tiny as possible hence the flow of maximum current through our transistor. This makes the transistor switch ON. Figure 2 demonstrates the saturation region characteristics. 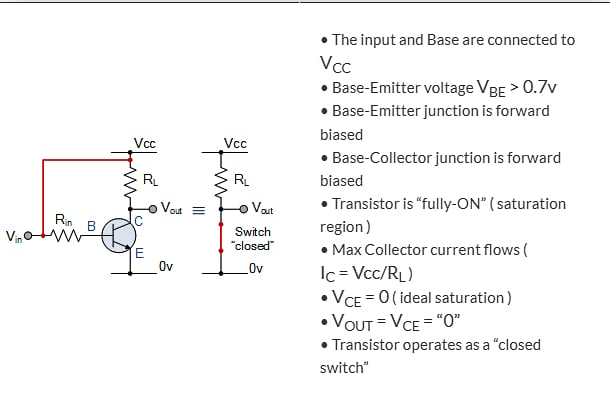 • Cut-off region. Here the input base current and the output collector current are zero and the collector voltage is at the maximum resulting in a large depletion layer with zero current flowing through the transistor. In such conditions, the transistor is switched off.

The cut-off region characteristics are shown below: 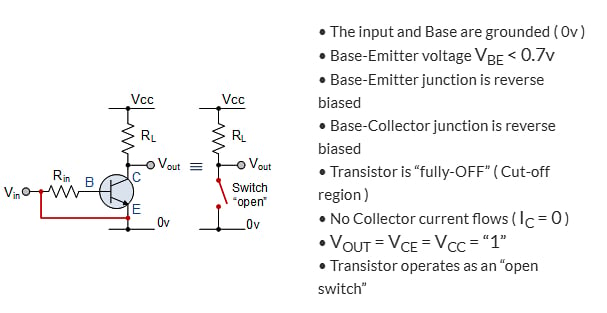 The transistor operation is similar to that of a single-pole single-throw solid state switch, where when zero signals are applied at its base, then it remains OFF and in such a situation, it acts as an open switch with zero collector current flowing. When we apply a positive signal to the base of the transistor, it is switched ON, and in this situation, it acts as a closed switch where maximum current flows through it. 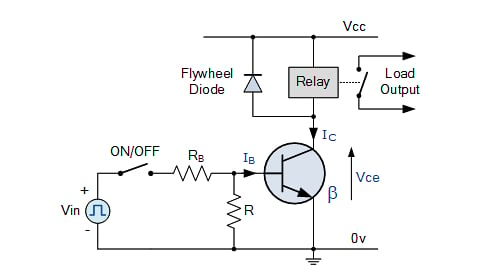 The circuit is similar to that of the Common Emitter circuit. The difference is that we need to turn the transistor fully ON (saturated) or fully OFF (cut-off) to be able to operate it as a switch.

Practically, we shall have a small number of leakage currents when the transistor operates at cut-off that is when fully-OFF. On the other hand, when operated at the saturation region, the device has low resistance leading to the flow of a small voltage we refer to as saturation voltage (VCE).

For the Base current to start flowing, the Base terminal must be more positive than the Emitter. For a silicon device, the Base must have a biasing input voltage of at least 0.7 volts. Varying the Base-Emitter voltage (VBE) alters the Base current which in turn varies the Collector current that flows through the given transistor.

If we attain the maximum flow of the Collector current, then the transistor is Saturated. The amount of input voltage and the current needed to put the transistor ON is determined by the Base resistor

Let us assume that

Find the Base resistor (Rb) value that is needed to fully power ON the transistor when the voltage at the input exceeds 3.0V

The preferred lowest value that will guarantee a saturated transistor switch is 82kΩ. 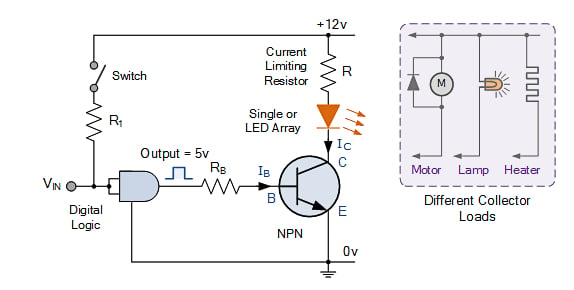 In the circuit above Rb is required for limiting the output current from the digital logic gate.

A PNP transistor can be used in the same way as an NPN transistor. The difference is that in PNP, the load is always connected to the ground and the PNP will be used to switch power to the load. To turn the PNP transistor on, we must ground the base terminal as in Figure 6. 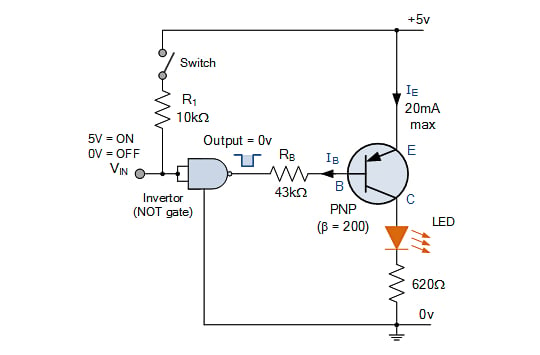 This involves the use of multiple switching transistors because there comes a time when the DC gain of a single bipolar transistor is too low to switch the load voltage or current. In the configuration, a small input bipolar junction transistor (BJT) transistor is involved in switching on and off a bigger current holding output BJT transistor.

The total current gain value of this transistor is the product of the individual value of each transistor given by;

Below are the possible Darlington Transistor Switch configurations. 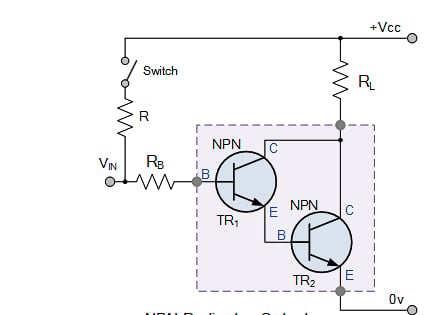 When using the transistors in switch applications, remember the following: