This article highlights Analog Devices' LTC7821-based hybrid converter that has the benefits of both conventional buck converters and charge pumps.

There has been a shift in data center and telecom power system design. Key applications manufacturers are replacing complex, expensive isolated 48 V/54 V step-down converters with more efficient, nonisolated, high-density step-down regulators (Figure 1). Isolation is not necessary in the regulators’ bus converter since the upstream 48 V or 54 V input is already isolated from hazardous ac mains.

For a high input/output voltage application (48 V to 12 V), a conventional buck converter is not an ideal solution because component size tends to be larger. That is, a buck converter must run at a low switching frequency (for example, 100 kHz to 200 kHz) to achieve high efficiency at high input/output voltage. The power density of a buck converter is limited by the size of passive components, especially the bulky inductor. The inductor size can be reduced by increasing the switching frequency, but this reduces converter efficiency because of switching-related losses and leads to unacceptable thermal stress. 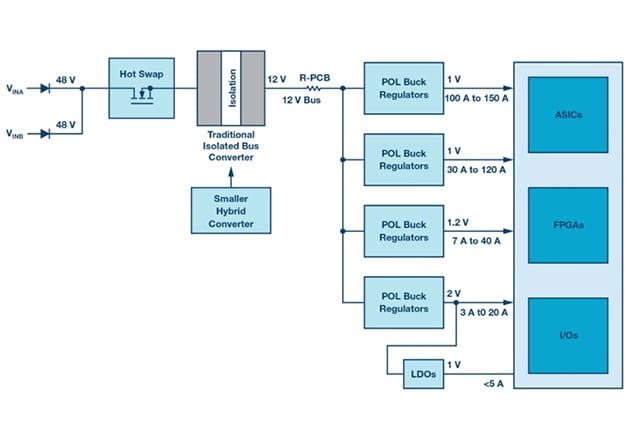 Switched capacitor converters (charge pumps) significantly improve efficiency and reduce solution size over conventional inductor-based buck converters. In a charge pump, instead of an inductor, a flying capacitor is used to store and transfer the energy from input to output. The energy density of capacitors is much higher than inductors—improving power density by a factor of 10 over a buck regulator. However, charge pumps are fractional converters—they do not regulate the output voltage—and are not scalable for high current applications.

In a typical 48 V to 12 V/25 A application, efficiency above 97% at full load is attainable with the LTC7821 switching at 500 kHz. To achieve similar efficiency using a traditional buck controller, the LTC7821 would have to operate at a third of the frequency, which results in a much larger solution size. Higher switching frequencies allow the use of smaller inductances, which yield faster transient response and smaller solution size (Figure 2). 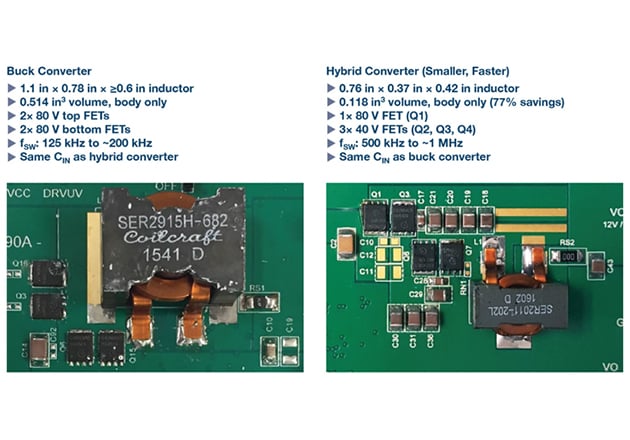 Figure 2: Size comparison of a nonisolated buck converter and equivalent 48 V to 12 V/20 A hybrid converter

The LTC7821 is a peak current-mode hybrid converter controller with the features required for a complete solution of a nonisolated, high efficiency, high-density step-down converter for an intermediate bus converter in data centers and telecom systems. The LTC7821’s key features include: 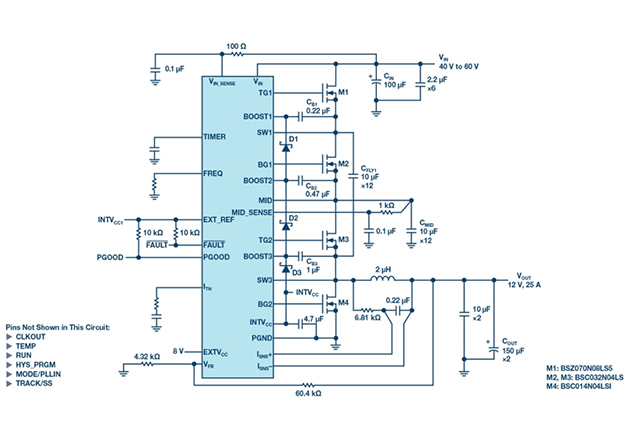 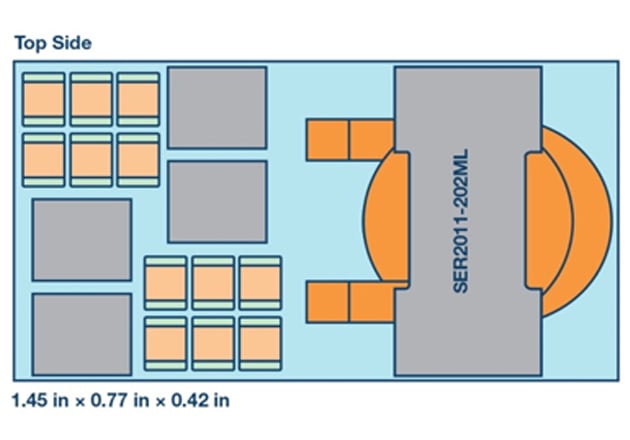 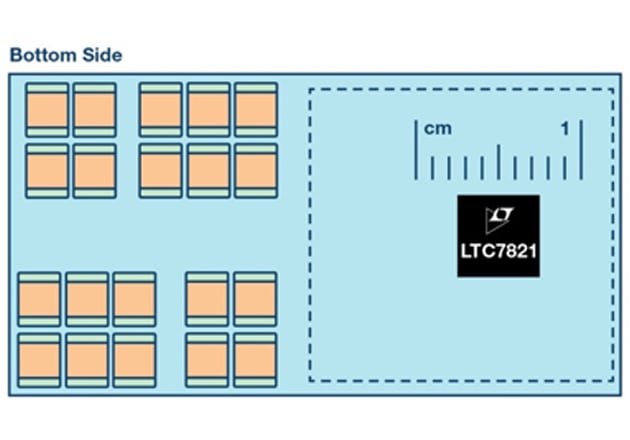 Figure 4: Possible layout for a complete bus converter uses the top and bottom sides of the board, requiring only 2.7 cm2 of the topside of the board.

Therefore, the switching losses in a hybrid converter are much smaller compared to a buck converter in which all switches see the full input voltage. Figure 5 shows the efficiency of the design. The peak efficiency is 97.6% and the full load efficiency is 97.2%. With high efficiency (low power loss), the thermal performance is very good, as shown in the Figure 6 thermograph. The hot spot is 92°C at an ambient temperature of 23°C with no forced airflow. 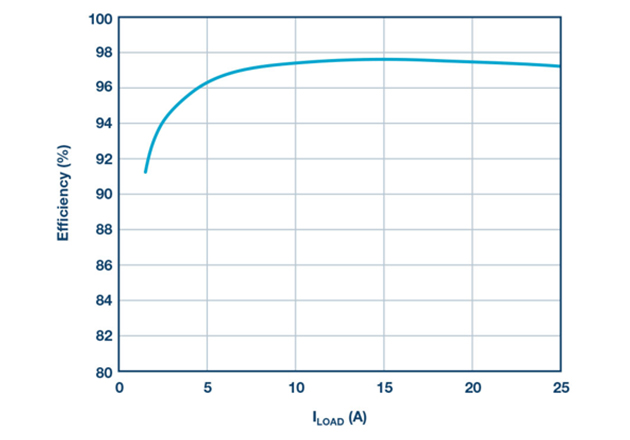 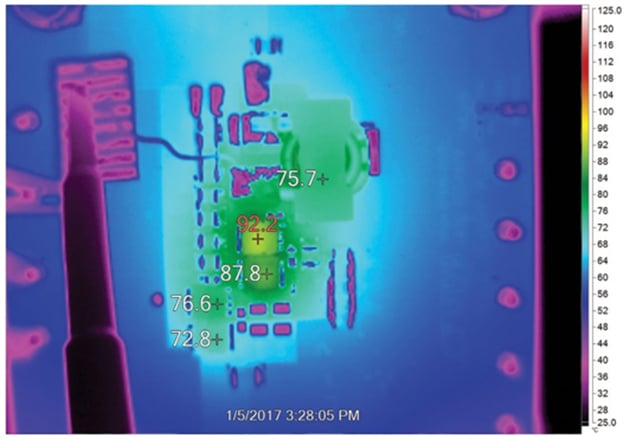 Figure 6: Thermograph of the hybrid converter solution in Figure 2.

The LTC7821 implements a unique CFLY and CMID prebalancing technique, which prevents input inrush current during startup. During the initial power-up, the voltage across the flying capacitor CFLY and CMID is measured. If either of these voltages is not at VIN ∕ 2, the TIMER capacitor is allowed to charge up. When the TIMER capacitor voltage reaches 0.5 V, internal current sources are turned on to bring the CFLY voltage to VIN ∕ 2. After the CFLY voltage has reached VIN ∕ 2, CMID is charged to VIN ∕ 2.

The TRACK/SS pin is pulled low during this duration and all external MOSFETs are shut off. If the voltages across CFLY and CMID reach VIN ∕ 2 before the TIMER capacitor voltage reaches 1.2 V, TRACK/SS is released, and a normal soft-start begins. Figure 7 shows this prebalancing period and Figure 8 shows the VOUT soft start at 48 V input, 12 V output at 25 A. 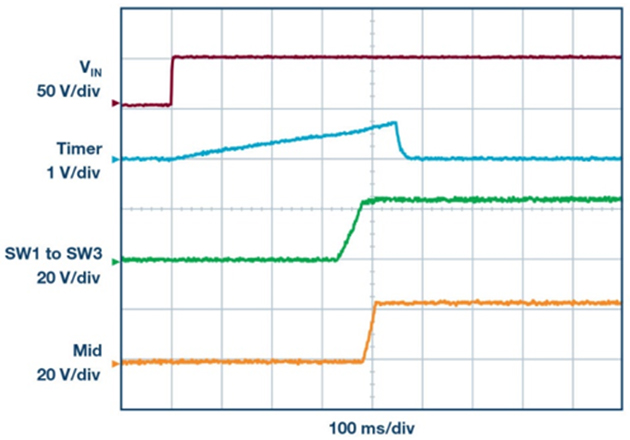 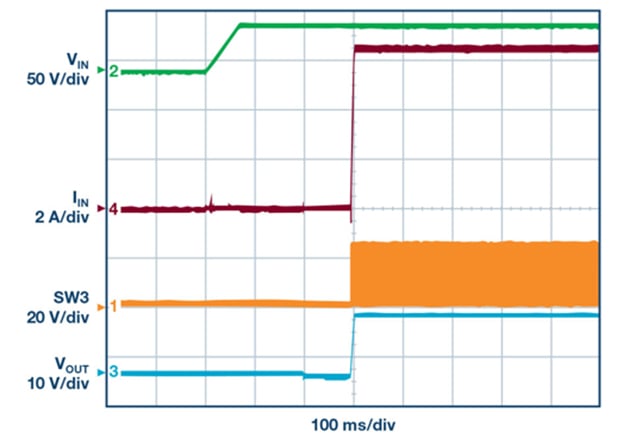 The easy scalability of the LTC7821 makes it a good fit for high current applications, such as those found in telecom and data centers. Figure 9 shows the key signal connections for a 2-phase hybrid converter using multiple LTC7821s. The PLLIN pin of one LTC7821 and the CLKOUT pin of another LTC7821 are tied together to synchronize the PWM signals. 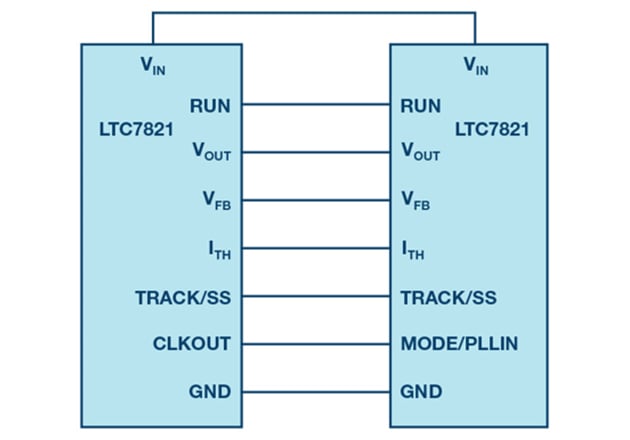 Figure 9: Connection of key signals of LTC7821 for a 2-phase design

For a design with more than two phases, the PLLIN pin and CLKOUT pin are connected in a daisy chain. Since the clock output on the CLKOUT pin is 180° out of phase with respect to the main clock of LTC7821, even-numbered phases are in phase with each other, while those with odd numbers are antiphase to the evens. A 4-phase, 1.2 kW hybrid converter is shown in Figure 10. The power stage of each phase is identical to the single-phase design in Figure 3. 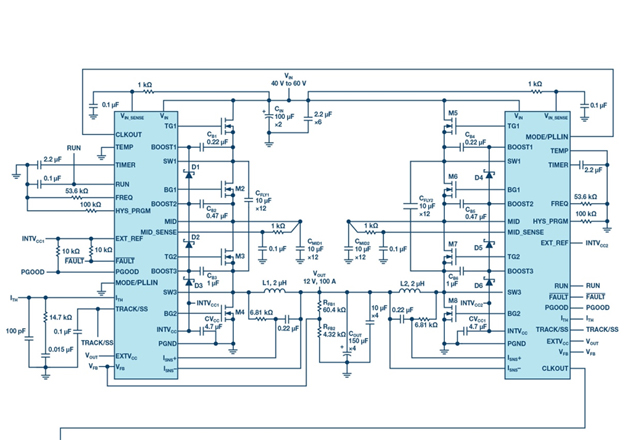 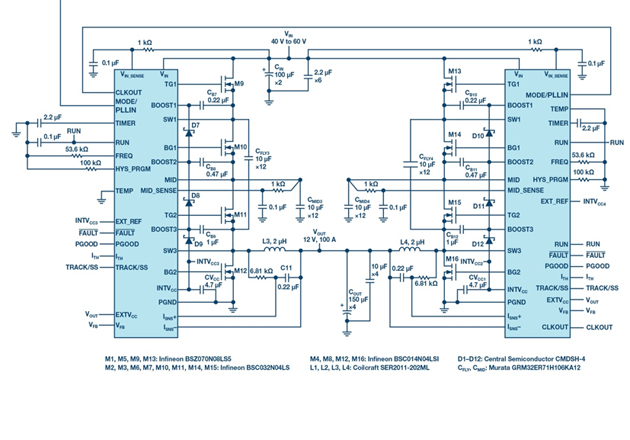 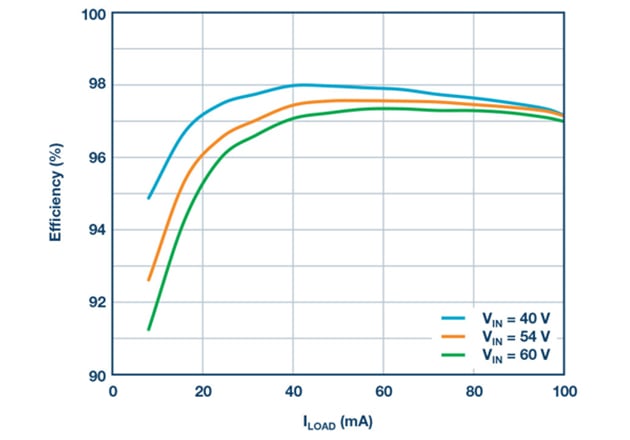 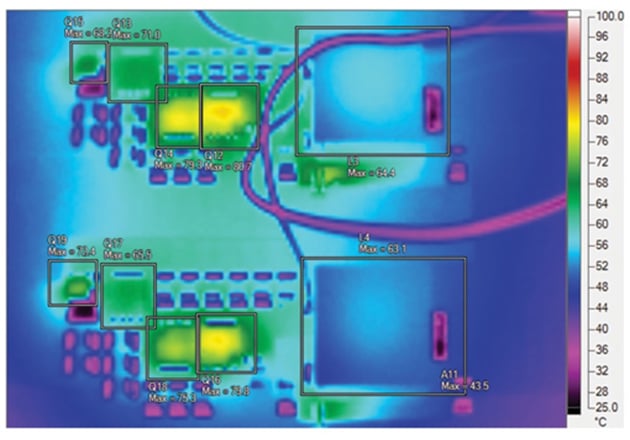 Figure 12: Thermograph of the multiphase converter shown in Figure 9. 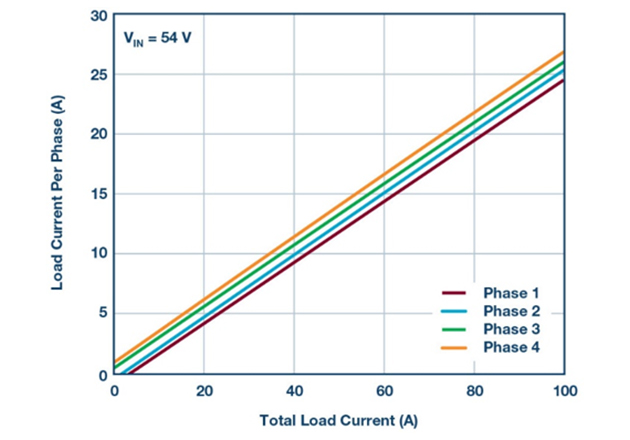 Figure 13: Current sharing for the multiphase converter shown in Figure 9

Ya Liu received MS degree in the Field of Power Electronics at Virginia Polytechnic Institute and State University. Liu worked as a señior manager of ADI applications engineering.