This article discusses how acoustic micro imaging tools work and how it helps detect and keep defective capacitors out of production.

The internal structural defects that cause high-voltage ceramic chip capacitors to fail in service typically begin as some form of gap, which may be called a delamination or a void or a non-bond. The gap, filled with air, may by itself be harmless, but thermal stresses will eventually generate cracks extending from the gap into the adjacent dielectric.

The cracks themselves may also be harmless for a time, and thus have no electrical signature. Eventually, they may reach an adjacent electrode, at which time the path created by the cracks causes the high-voltage capacitor to fail (sometimes explosively).

High voltage capacitors are often imaged acoustically to pinpoint internal gaps. If a capacitor is sectioned physically through a gap found by ultrasound, tiny ceramic fragments may fall from the sectioned face. These were created by numerous cracks in the dielectric. A crack-generating non-bond may have been caused by surface contamination that prevented bonding. A void may be an air bubble trapped by the fluid ceramic or the artifact left behind by a dust particle that was trapped during fabrication and then incinerated during firing of the ceramic.

There is value to assemblers in identifying those high-voltage capacitors that harbor internal gaps in order to remove those capacitors from the assembly process. The gaps are not amenable to x-ray inspection.

The imaging process is this: the moving transducer is coupled to the top surface of the capacitor by an accompanying column of water, needed because high-frequency ultrasound does not travel through air. The transducer launches a pulse of ultrasound through the water column into the capacitor. The pulse travels through the capacitor until it strikes a material interface, where it will be in part reflected back to the transducer as a return echo signal. The most highly reflective interface is that between the ceramic (or any solid material) and the air in a gap. Interfaces between solids are various shades of gray.

Suppose that a very thin gap such as a non-bond lies 1mm below the surface of a high-voltage ceramic chip capacitor. If the height of the water column is 4 mm, the time for the pulse to travel from the transducer to the capacitor and return to the transducer will be about 6 microseconds. Moving at a speed that can exceed 1 m/s, the transducer collects the return echo signal from thousands of x-y locations per second. The critical imaging of a tray holding multiple capacitors, or of a single capacitor, is thus achieved quickly.

Apart from air- or gas-filled gaps, all internal material interfaces in any sample being imaged by a C-SAM tool are solid-to-solid interfaces. The percentage of ultrasound reflected by these interfaces can range from a few percent to above 95 percent. If a pulse strikes an interface where, say, 50% of the ultrasound is reflected and the other 50% transmitted across the interface, the transmitted portion will travel through presumably homogeneous material (ceramic, mold compound, metal) toward the next material interface. Here it will again be partly reflected and partly transmitted. If 70% is reflected and 30% transmitted, what is transmitted is only 15% of the original pulse. It strikes a third interface, the reflected portion must return by the same route through the same interfaces, and will incur the same losses. If a particular sample has enough layers. there comes a point when the reflection from a deep interface is too weak to reach the surface and the transducer.

How, then, can meaningful echoes be received from the bottom layers of a high-voltage ceramic chip capacitor having dozens or even hundreds of layers? One would expect the return echo signals to be received only from the handful of layers nearest the top surface. The answer lies in the details of the reflection process. Every material has an acoustic impedance value - acoustic impedance being the product of the acoustic velocity (in meters per second) and density (grams per cubic centimeter) of the material. The percent of reflection and transmission are determined by the difference between the products of these two values in the two adjacent materials.

Very occasionally, however, the product is virtually the same in both materials, even though the individual values for acoustic velocity and density are very different. It is a peculiarity of ceramic chip capacitor that the two materials - dielectric and electrode - fit this unusual pattern. Ultrasound pulsed into the top surface is reflected only minutely by each internal interface. Echoes from highly reflective structural defects can be read from any interface within the capacitor. 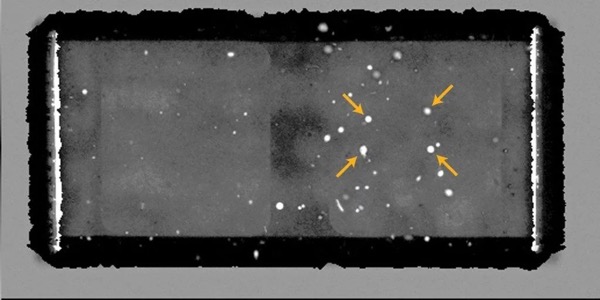 Figure 1 is the top-view acoustic image of a multi-layer ceramic high voltage capacitor. The image was made using a C-SAM imaging tool with a 50 MHz transducer. C-SAM transducers range from 10 MHz to 400 MHz in frequency. The purpose of the mid-range 50 MHz transducer is to provide good penetration and good resolution. This capacitor measured 33.27mm x 15.3mm x 5.33mm.

The Electrode and Dielectric Stack

Very faintly visible at right and left are the two stacks of electrodes and dielectric within the capacitor. Each stack is roughly square, and they are separated by the irregular dark regions at the center of the part.

The return echo signals were gated on the whole thickness of the stacks - meaning that return echo signals from any depth would be displayed in the acoustic image. Gates of any thickness can be set, as well as multiple gates that will produce multiple images. In this image made by a wide gate, the depth of a particular feature cannot be determined.

The scattered small white features within the image are voids - small air bubbles that were trapped during fabrication. They are white because the interface between the capacitor (a solid) and the air (a gas) reflects essentially all of the ultrasound pulsed by the transducer. Much larger white features are some-times seen in high voltage capacitors. They are variously called non-bonds or delaminations, and are much less common than they were a few decades ago. The danger posed by the voids seen here is that any of them can generate a crack that will grow until it creates a pathway between two adjacent electrodes. Because of the high power levels, high voltage capacitors typically explode when the dielectric is breached. Lower power ceramic capacitors simply stop functioning. 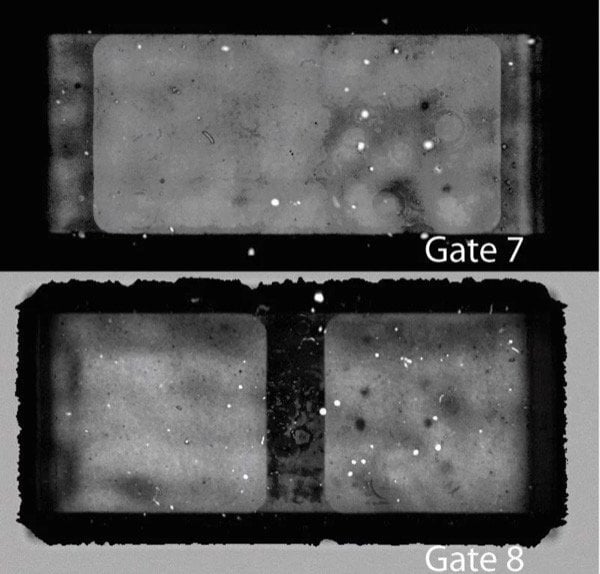 Figure 2: Of the three gaps marked by arrows in Figure 1, three are in gate 8, while the fourth is gate 7 above gate 8, and is imaged as a dark acoustic shadow

To make Figure 2, the 5.33mm thickness of the capacitor was divided into eight equal gates, each 0.66mm thick. Gate 7 is the top image in Figure 2, and gate 8 is the bottom image. The area covered by each of the two stacks obviously changes from gate 7 to gate 8. To make these images, the transducer accepted only return echo signals from with the gate, and ignored all echoes from above or below the gate.

In the right half of Figure 2 are the four voids marked by arrows in Figure 1. One of the voids, however, is now black rather than white. This void lies somewhere above gate 7. Echoes returning from the gated depth are locally blocked by this void. The resulting black acoustic shadow marks the location of the above-the-gate void.

In the image of gate 8, all four of the voids are black. The one that lies an unknown distance above both gates is also somewhat more faint. The white voids in the gate 8 image all lie within gate 8. 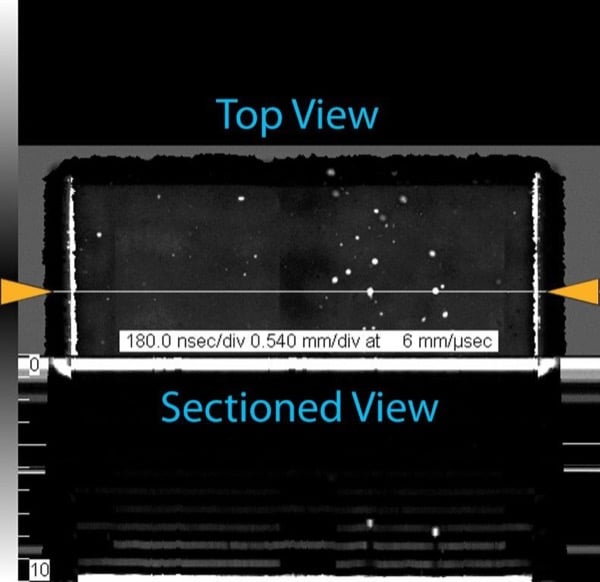 Figure 3: Line between arrows shows plane for Q-BAM nondestructive sectioning; sectioned views below shows depths of the two gaps intersected by the line

The same capacitor was also imaged by the Q-BAM™ imaging mode, developed and patented by Sonoscan. The purpose of Q-BAM is to produce a nondestructive cross-section through a part. In Figure 3, the top view is essentially the same as Figure 1; it is used here to select the vertical plane through which nondestructive imaging will be made. In Figure 1, the line between the two arrows marks the vertical plane. The part can be rotated as desired and imaged through as many planes as desired.

The transducer scans back and forth along this line, first collecting images from a very thin gate at the bottom of the capacitor, and then moving fractionally upward at each scan. The line of travel was chosen to include two of the voids seen in Figures 1 and 2, and to show their respective depths. Although they are both in gate 7 in Figure 2, the Q-BAM image shows that the void in the left lies slightly higher.

Several other acoustic imaging modes have been developed by Sonoscan for screening lots of high voltage capacitors or for diagnostic analysis of individual capacitors. In all cases the purpose is the same: to keep defective capacitors out of production.