With the development of electric vehicles and renewable energy storage systems, traditional battery storage systems struggle to meet the demand for high energy and power density. Although lithium-ion batteries demonstrate high energy density, their energy storage mechanism limits their power density, making it difficult for high-power output in practical applications such as electric vehicles. Moreover, lithium-ion batteries currently used for these applications are not eco-friendly.

Capacitors, on the other hand, exhibit a fast charge-discharge rate, high power density, low cost, and stability. Moreover, they are an eco-friendly alternative.

Capacitors consist of two electrodes and an electrolyte. As the capacitor's energy storage does not rely on chemical reactions, its charge absorption and desorption properties are superior. The physical design of the capacitors allows them to hold charges, making them very fast at charging and discharging.

Due to these advantages, they are also useful for power leveling. However, the storage capacity of capacitors is much lower than that of lithium-ion batteries, making them less suitable for energy storage. But they are applicable in applications that require repeated charging and discharging at high currents, such as power leveling, regenerative braking, and voltage regulation during power surges.

Most capacitor technologies, however, can only operate below 80 degrees Celsius. The operation of capacitors at high temperatures is desirable because of their new automotive applications.

A team of researchers at Osaka Metropolitan University has developed a deformable solid electrolyte for fabricating a high-capacity all-solid-state capacitor that can operate reliably at temperatures up to 200 and 300 degrees Celsius.

Ceramic capacitors that use solid inorganic materials as an electrolyte can be used at elevated temperatures of around 200 degrees Celsius and are suitable for high voltage applications. But their storage capacity is relatively lower, limiting their use cases. Moreover, they offer very low ESR and excellent ripple and inrush current capabilities. 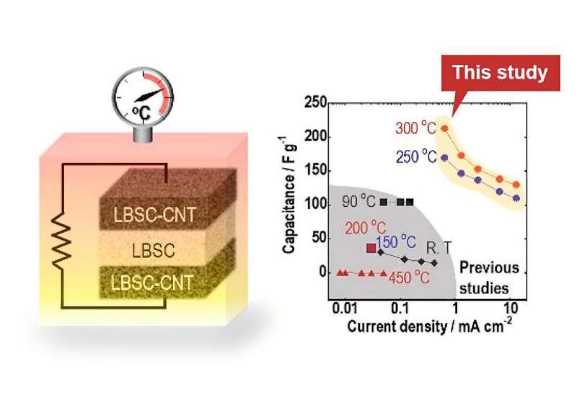 The capacitor works reliably at temperatures up to 200 to 300 degrees Celsius. The researchers hope their newly developed capacitor will improve the technology for high-temperature applications. They plan to construct all-solid-state hybrid capacitors with even higher energy densities by controlling the chemical reaction between a solid electrolyte and carbon and then combining them with positive electrode materials used in lithium-ion batteries.