Designers of inverters for small AC motors in consumer and general-purpose industrial applications are required to meet increasingly challenging and stringent efficiency, reliability, size, and cost constraints. Classically, many of such small inverter designs utilize discrete power device packages along with the necessary auxiliary components needed to realize interface, drive, and protection functionalities.

With this approach, relatively large and complex PCB designs are required to meet all of the spacing and layout requirements of the drivers and discrete power devices combination. Another equally perplexing problem is maintaining consistent performance and reliability when the characteristics of the drivers and power devices are not properly matched. An alternative solution to these problems is to use an integrated power module that contains all the required power devices along with matched gate drivers and protective functions integrated with low-voltage and high-voltage ICs (LVIC & HVIC). Finally, the fully integrated package solution allows for a decrease in stock handling and reduces the assembling time compared to a discrete solution.

Extending the family recently with the surface mounted SP2SK module and the high current rated Large DIPIPM+, the line-up of Mitsubishi Electric’s transfer molded IPMs covers a power range from several tens of watts up to more than 12kW as shown in Figure 1.

The topologies of hard switching motor drivers in the lower power range are similar. For an optimum of costs and reliability, the amount of used semiconductors is desired to be as low as possible. The solution to be found in nearly all types of servo drives, home appliance inverters, fan inverters, and pump inverters is the three-phase full-bridge using Insulated Gate Bipolar Transistors (IGBT). The advantage of using IGBT is the high blocking capability combined with lower conducting losses, compared to MOSFET technology. 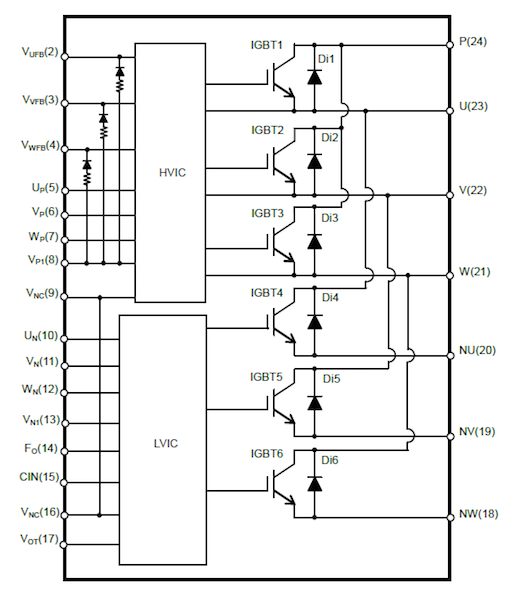 The market for consumer and industrial products is becoming more dynamic. Trends of smart home technologies and also industry 4.0 (IoT) requirements lead the designer to develop the next generation inverters in a short time and more cost-efficient. Here, Mitsubishi Electric’s transfer-mold modules outperform in the market with their highly-integrated, easy-to-implement, and cost-competitive solution features. They enable to shrink the inverter due to the compact module outline and sophisticated pin design with well-designed clearance and creepage distances. Furthermore, the line-up with the different series offers the possibility to design a scalable platform inverter, as several current ratings of each series are available. With offered blocking voltages of 600V and 1200V, commonly used single and three-phase applications are covered. With the UL recognized isolated thermal interface with a rating of 2.5kV (1.5kV for the SP2SK module) and a low thermal impedance, the effort for a user-safe design is lowered, covering also the higher requirements for industrial use. Furthermore, the mechanical stress in the module is heavily decreased with the use of organic material, as the thermal expansion coefficients are better matched in comparison with ceramic materials. For high power ratings, an additional internal heatsink is molded in the module for better heat spreading.

Mitsubishi Electric’s modules consist of six IGBT with separate freewheeling diodes or six reverse-conducting IGBT (RC-IGBT). For the easy control of the IGBT, one or three high side driver ICs, a low side driver IC and, depending on the series, three bootstrap diodes with current limiting resistors are integrated. Due to the level shifter integrated with the HVIC, the transfer molded modules from Mitsubishi Electric can be powered by a single 15V supply voltage source and can be controlled directly by an MCU without the need for galvanic isolation to control the high side switches. All dies are directly mounted on the lead frame without using a PCB inside the module, offering a market-leading lifetime performance. 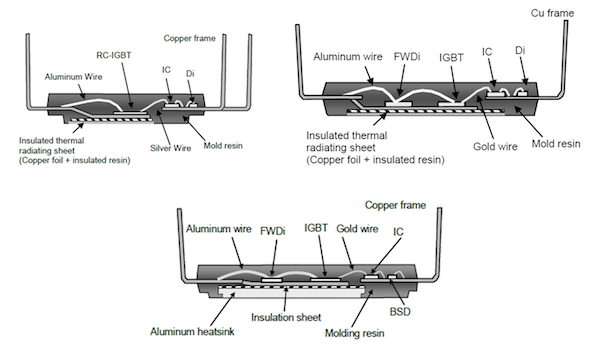 The emitter of the low side IGBT are open, enabling an independent current measurement of each single motor phase by the use of shunt resistors. With the possibility of detecting the three-phase currents independently, state-of-the-art position-sensor less machine control can be used in the control framework of the user. The output signals of the current Measurement shunts are additionally used for the internal short circuit protection, which prevents the module to operate out of the short-circuit safe area of operation (SCSOA). Furthermore, the modules integrate a temperature output with a linear temperature-voltage dependency, resulting in an easy-to-implement condition monitoring and offering the possibility to integrate a dynamically controlled de-rating and the optional over-temperature protection.

All of Mitsubishi Electric’s transfer molded modules leaving the production line are tested regarding their static and dynamic electrical characteristics and undergo a functional test with an inductive load, which help to reach a high quality of delivered products. All results are recorded in an individual end-of-line test report in the factory.

Motor inverters are found in very different kinds of applications. Mitsubishi Electric offers different packages and herewith the optimal solution for each requirement.

The module with the smallest outline is the surface mount SP2SK module. Additionally to the common protection features of the DIPIPM family, interlock protection is integrated, preventing an arm shoot-through if high and low side switch is turned ON. With the compactness of this module due to the used RC-IGBT, it is perfectly suited for low power to single-phase applications like dishwashers or fans.

If a higher power rating is targeted, the SLIMDIP package is optimal. As well as using the same RC-IGBT technology, it offers outstanding compactness with through-hole technology. Matching the requirements of price-sensitive platform inverters used in home appliances with a power range between 0.5kW and 1.5kW combined with a sophisticated pin design, the time-to-market is highly decreased.

With the Super Mini DIPIPM package, Mitsubishi Electric set a market standard for transfer mold IPM modules. It covers a wide range of current ratings, allowing the precise choice of the optimally suited module. As a highlight, additionally, to the choice between silicon IGBT and silicon MOSFET models, two SiC MOSFET modules are available, based on Mitsubishi Electric’s long term experience with silicon carbide.

The Mini DIPIPM packages allow, due to its bigger package, even better heat dissipation and therefore higher power rating. Moreover, the increased pin distances allow the use of 1200V IGBT in some models.

The Large DIPIPM™ package targets high power inverters where space is limited and a PCB based design is preferred. Blocking voltages of 600V and 1200V are offered with a wide current range.

The DIPIPM+ and large DIPIPM+ is one of the latest developments. Based on Mitsubishi Electric’s experience and knowledge, the package contains a three-phase rectifier, a three-phase full-bridge, and an optional brake IGBT. With the highest level of integration and compactness, it is the package which the user the most complete solution, shortening the component decision process and lifetime evaluation.

Philipp Jabs received his Master of Science, Electrical, Electronics, and Communications Engineering at RWTH Aachen University and worked as an application engineer of power semiconductors at Mitsubishi Electric Europe BV, an electronics and electrical equipment manufacturing company headquartered in Tokyo, Japan. It is a core company of Mitsubishi.

Muzaffer Albayrak is a graduate of Technical Field in Mechatronics, Robotics, and Automation at University of Kocaeli. He then received an engineering degree in the field of mechatronics, robotics & automation. He is now a senior business development engineer at Mitsubishi Electric Europe B.V., an electronics and electrical equipment manufacturing company headquartered in Tokyo, Japan. It is a core company of Mitsubishi.