Circuit analysis is a crucial aspect of understanding implementation and converter output as it involves studying various electrical quantities like node voltages and loop currents through calculations.

The behavior of DC/DC converters is governed by the interaction of components that help build the circuit. Circuit analysis is a key aspect of understanding the implementation and converter output as it involves studying various electrical quantities like node voltages and loop currents through calculations. Read on to learn more about the fundamentals of DC/DC converter circuits and key examples for demonstrating the process of circuit analysis.

DC/DC converters form a key aspect of study in power electronics and energy drives in industrial applications. To cater to multiple applications, it is important to implement them based on the requirements and understand the nuances of the circuit behavior [1]. The voltage and current relationships govern the design of converter circuits during equilibrium. Multiple factors influence these values, including voltage ripple in the capacitor, current ripple caused by the inductor, equilibrium state, and so on.

The circuit diagrams of some of the basic DC-DC converters are shown in Figure 1. If we observe these circuits closely, they are mostly composed of basic electrical elements like semiconductor switch, diode, inductor, capacitor, and DC power supply. The arrangement and the quantity of these basic elements differ in these circuits, making them yield different results. The general strategy of circuit analysis is to create and solve a system of independent equations to determine the design conditions or solve for essential variables. It can also be defined as determining the voltages and currents in every element of the circuit [2].

The operation of DC/DC converters can be distinguished into two distinct modes based on the current flowing through the inductor [3]. When the inductor current is always greater than zero, it is said to be operating in Continuous Conduction Mode (CCM). In the case where the average inductor current is low due to low switching frequency or high-load resistance, the converter is said to be operating in Discontinuous Conduction Mode (DCM).

It is important to know that CCM is the preferred mode of operation for the converters as it offers advantages like improved efficiency, low component count for passive devices, and effective use of semiconductor switches. The converter operation in DCM is slightly more complicated and demands dynamic control. This necessitates determining the minimum value of the inductor so that operation in CCM is maintained.

To simplify the complexity of the circuit analysis, some approximations are made. This includes the assumption that the load is resistive in nature and the DC component of the output voltage is ripple-free. Also, the inductor and capacitor are considered pure in most cases, although it involves a small-ripple approximation. 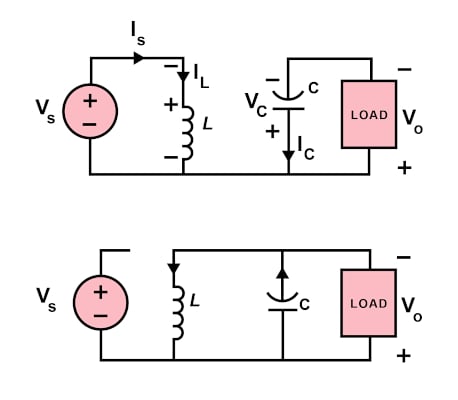 Figure 2. Buck-boost converter circuit diagrams when (a) switch is on and (b) switch is off. Image property of EETech

where D is the duty cycle. 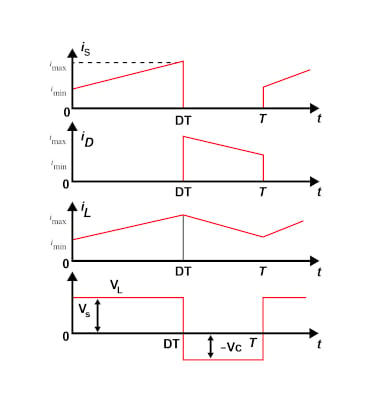 Figure 3. Waveforms of input current, diode current, inductor current, and the voltage across the inductor for a buck-boost converter. Image property of EETech