In case of high-current applications inverter-branches are in parallel to have feasible current carrying capability per phase. Compared to such interleaved converter solutions, the approach using coupled-inductors means no extra effort in terms of semiconductor, driver and current sensing. However, cost-intensive magnetics are minimized that far that it is also worth considering whether single-phase solutions should be substituted by the coupled approach. One example, a 48V-12V demonstrator is depicted in Figure 1. 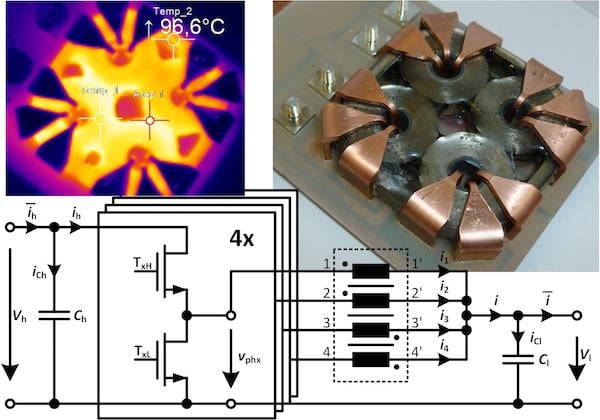 In the subsequent chapters it is motivated why some of a high-performant soft magnetic material is chosen and how it is configured to take advantage of its properties. Furthermore, this article puts emphasis on the understanding and discussion of the behavior of our prototypes. Other designs with need for high power density at high currents (e.g. 400V-800V DC-converter) can be derived.

Nanocrystalline tape material is typically known for its high relative permeability such that it is often used in common-mode chokes. However, today it is possible to manufacture such material at low relative permeability (μr= 150 .... 2000) without loosing the high performance properties of the material, i.e. saturation flux density of 1,2 T and low losses [1][2]. Thus it is possible to basically store magnetic energy in the quasi-distributed airgap of tape-wound cores, featuring the big advantage of low proximity losses especially at high currents.

Discussing single-phase inductors, flux excitation is proportional to inductor current. In high-current applications coming with a significant amount of dc-current such tape-wound cores would result in an inductor operating at its saturation limit with a small ac-flux component, such that the thermal limit of the material is never reached. To really stress the material it would be beneficial to have a pure ac-flux at much higher peak-to-peak flux excitation and design the system to its thermal limitation. One mechanism to do this is using coupled inductors. For better understanding a two-phase inductor is depicted in Figure 2. 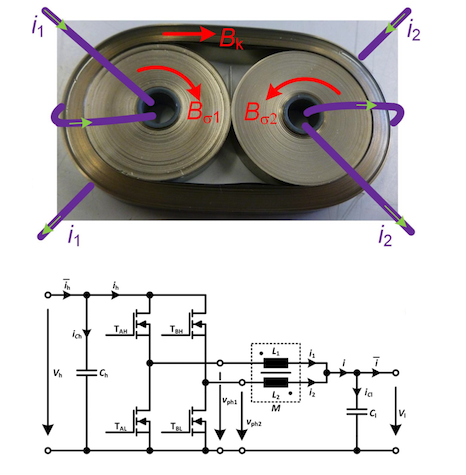 From the setup the subsequent proportionalities can be directly derived:

Thus, when both currents are controlled on the same dc-level, the coupling path is free of dc-flux, Bk,dc = 0T. As a consequence, ac flux excitation Bk,ac may be chosen much larger without driving the material into saturation. It turns out that the most compact solution is given when the material is operated at its thermal limitation of 250 W/kg local losses.

Designs based on pareto analyses were conducted. Various material samples of relative permeability between 160 and 1900 available in the lab were calculated, many boundary conditions such as thermal, saturation and various geometric limits, including the copper windings, were regarded. As a result the number of electrical turns, self-inductance and coupling coefficient together with their geometric properties were given. Furthermore, the relative permeability to be chosen for the leakage path and coupling path respectively was determined.

It turns out that the analytical reluctance model of the coupled inductors fits well to the measurements using impedance analyzers. This is traced back to the obvious predominant direction for conducting the flux within the wounded tapes.

This design based on the principle of Figure 2 was optimized for the inductor core as first demonstrator [3]. Output current could be increased up to 110A without facing thermal or saturation problems. The inductor is placed in the laboratory without casing and without forced convection at room temperature. At full duty cycle, power density is determined at 110 A in the lab by:

Figure 4 shows an infrared image taken at duty cycle of d=0.5, since then stress on the magnetic core is maximum, especially for the coupling path. However, since 160°C is still feasible for the core material, there is much headroom for elevated ambient temperatures. Both currents have the same dc-level up to 55A and an ac-ripple of max. 30App. The currents i1, i2 and (i1 + i2) show strong harmonic components at 2ƒs. However, this harmonic cancels out in (i1 - i2) as modeled and also proven Figure 3, where the current probe is connected correspondingly. Thus, the coupling path is only stressed at ƒs. In the current design this results in maximum flux densities of: 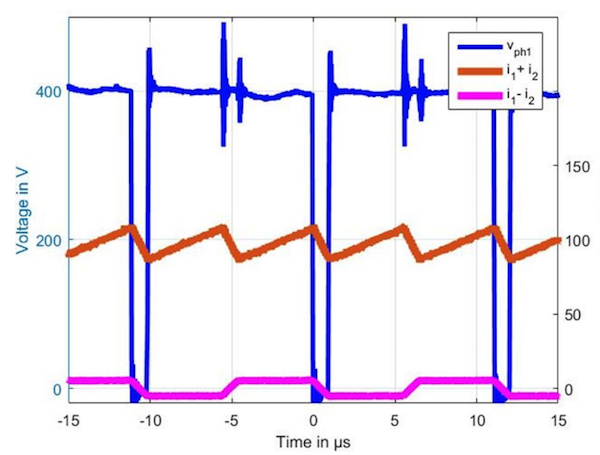 Latter number is considered enormous in conjunction with the steady state thermal image. The overall converter using SiC MOSFETs showed an efficiency of 98,7% ± 0,98%, about 100 W losses are traced back to the inductor. 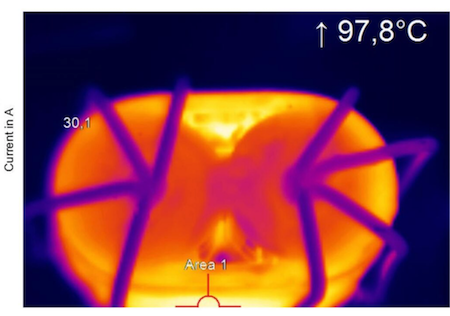 There is room for improvements, pareto analysis shows even higher compactness when relative permeability could even be reduced for the leakage path (125 instead of 160) and the coupling path (780 instead of 900). Such material can be produced, optimization potential is given.

A second GaN-based demonstrator as depicted in Figure 1 is designed based on pareto analysis. All phases operate 90° phase-shifted at 100kHz, a current controller shares the load equally. 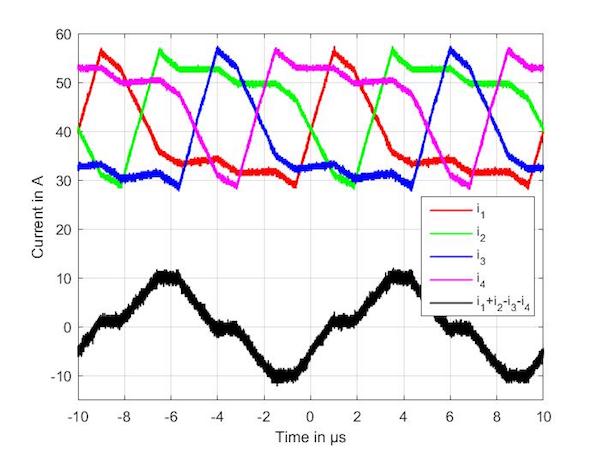 Many of the indicated effects in the two-phase system are valid as well in this four-phase configuration [4]. The system is capable of driving the full duty cycle, however, in the application of mild hybrid vehicles with 48V-12V DC-DC converters 14V is considered as maximum output voltage. A high power density is demonstrated at high flux excitation:

Overall efficiency of the converter is up to 96,5%, losses being traced back to the inductor are below 20 W. Under full load conditions the 24 cm3 inductor (outer cuboid volume) is thermally feasible, see also Figure 1. The maximum temperature of about 100°C, measured in the lab without casing at room temperature without forced convection or cooling plate, is basically too low. In a future design maximum local losses should be limited to higher numbers than 250W/kg (current design). Again, choosing material with slightly adapted relative permeability is basically another optimization potential.

Two very compact coupled inductors were presented for high-current applications. The demonstrated power densities are higher than all solutions known to the authors as state of the art (partly multiple).

Prof. Dr.-Ing. Christian P. Dick is a Faculty of Information, Media and Electrical Engineering at Cologne University of Applied Sciences, and currently works on resonant converters with focus on novel pulse patterns, generated by FPGA's.

M.Sc. Patrick Deck is a Faculty of Information, Media and Electrical Engineering Institute of Automation Technology (IA) at Cologne University of Applied Sciences.