Load profile in power systems determines the approximate energy required by a system over a specific period. In this article, learn how to calculate load profile, the methods involved in the calculation, and solve a practical example.

Power electronic systems consume power. It is the work of the engineers designing the systems to determine how much power the system can consume. Therefore, a smart engineer must be well-equipped to calculate the system's load profile.

Some systems consume too much power while others do not. Most of the systems have power rating tags on them. The ratings are done to describe how the system consumes power at a designated period. The approximation of the power an electrical power system consumes within a specific period is what we refer to as the load profile.

The power system load profile is represented by a rectangular graph showing the instantaneous loads over a particular time. This is the easiest way to study the system's load changes over time. The process of energy load approximation is crucial to designers and engineers as it provides the necessary information to determine the size of energy storing devices because the storage capacity of such gadgets is dependent on the total energy needed to power the loads connected.

To develop the load profile, two methods are used.

This method involves the calculation of the average value of instantaneous loads that consume power over the period of 24 hours. The method is preferred when carrying out power utilization for solar systems applications.

The method is suitable for backup applications such as UPS and battery systems. The method determines the average instantaneous system loads over a backup/ autonomy time which is the period in which the power loads require backup systems to supply them with electric energy.

This is the first step where all the collected loads are converted into a load list.

Here, the period is labeled autonomy which is interpreted to mean back-up, and it is the representation of the total number of hours the load requirements to be supplied with the backup energy such as batteries during the interruption of the service.

The formula for calculating the power consumed by the load in Volt-Ampere is below:

This is developed from the available load list which demonstrates the distribution of the load over a certain period.

Tabulate the loads in the table below by using the Autonomy Method. 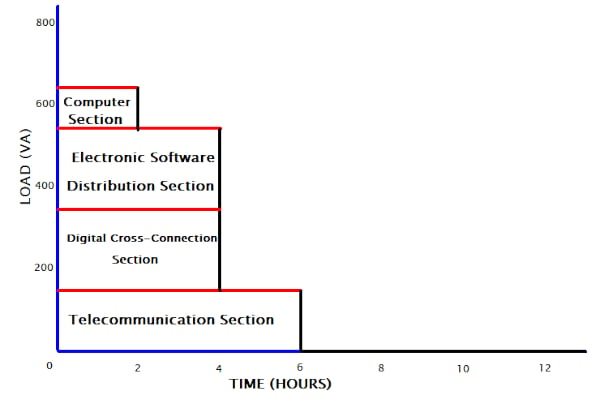 For the 24-hour method, the energy rectangle can be developed using the load period when the load is powered.

This involves rating all the devices of the systems, such as the breakers, fuses, cables, rectifiers, and inverters. The equation below is suitable for computing the design load:

During the calculations, engineers should consider the intended future load growth. This has a range of between 5 and 20%. The designers have to take into account unpredicted inaccuracies during the estimations of the load. The design margin has a range between 10 to 15%.

The pick load apparent power of a system is assumed to be 640VA. By considering that there will be future growth of 10% and the design margin is 10%, calculate the total design load.

This is utilized while carrying out the energy-storing device sizing. The total energy can only be found by calculating the area within the load profile graph curve.

The total energy can be calculated using the equation listed below:

From the table in Figure 1, the total calculated load energy is 2700 Vah. Considering that the future growth will be 10%, and the design margin is 10%, calculate the total design energy required.