Electronic loads are versatile test tools and invaluable instruments that enhance the performance of AC and DC power supplies and energy sources. In this article, learn more about selecting AC and DC electronic loads for your application.

A power supply can be analyzed by connecting it to a suitable-sized resistor to sink current to ground. However, such a passive load is not representative of most actual applications. An electronic load mimics the complexity of a real-world load with resistance, inductance, and capacitance that can vary under changing conditions. Whether by manual tuning or programmed under computer control, an electronic load can mimic the many different load conditions facing a power supply in a circuit or system and be part of testing that provides data on how a power supply responds to those conditions.

Electronic loads are useful test tools as part of a measurement setup or system, working with a power analyzer to analyze innovative designs or maintain the performance of an existing power system. More than just resistive loads, electronic loads can emulate electrical and environmental conditions faced by complex power supplies like DC-to-DC converters and AC-to-DC converters, such as the sequence of events during the power-on process of a power converter.

An electronic load can dynamically adjust turn-on voltages for a power converter to match the minimum and maximum voltages experienced by the power converter in different applications. The load can also emulate the effects of power supply unsteadiness, such as ripple and noise, and how a power supply performs when operating with different load/line regulation forms.

AC electronic loads are designed for standard grid voltages, such as single-phase and three-phase systems operating at 110 or 220 VAC. The loads provide precise control of voltage and current (Figure 2) as might be needed to emulate such conditions as a unity power factor (Figure 2, left) or a high crest factor (Figure 2, right). The loads help test power systems and equipment such as power inverters, fuses, switches, DC-to-AC inverters, uninterruptible power supply (UPS) systems, and AC power supplies. DC electronic loads measure across wider voltage ranges than AC loads and are used in testing batteries, capacitors, solar panels, DC-generating turbines, and DC power supplies. Because an electronic load sinks current and absorbs power, it will generate some heat, especially when handling high power levels.

An electronic load for any application should be capable of dissipating whatever heat is generated at the maximum power levels during source testing. High-power DC loads typically include fans, vents, or fluid-based cooling techniques to dissipate heat generated during testing. Some DC loads employ regenerative techniques to recapture as much of the electrical power under test as possible and minimize thermal energy loss.

Selecting Load Based on Application Needs

Selecting an electronic load can be guided by the application to be tested, whether a sizeable 220 VAC three-phase unit under test (UUT) maintained by a regular schedule of measurements or a lower power, lower voltage DC supply that must be tested in large volumes as part of production-line quality-assurance measurements.

The load’s voltage, current, power, and resistance limits should exceed the maximum ratings of the UUT, and the load should provide the functionality and performance required to emulate the application. Some test cases, for example, may need an electronic load with wide bandwidth and an arbitrary waveform generator to support the analysis of dynamic power supplies or recreate specific performance parameters, such as fast power-up slew rate.

AC electronic loads are available from several suppliers, including California Instruments, Chroma Systems Solutions, Kikusui, and NH Research, such as the 4600 Series of AC electronic loads from NH Research (Figure 3) with a wide range of measurement functions for advanced waveform testing in addition to standard CV, CC, CP, and CR testing. B&K Precision, Chroma, Kikusui, and NH Research offer DC and combination AC/DC electronic loads. For example, the 63800 Series of programmable AC/DC loads from Chroma (Figure 4) enable testing on both power sources and supplies. Specifiers can select models with power ratings as high as 4500 W, DC voltage as high as 350 V RMS, and current as high as 45 A RMS. The loads permit frequency to be set at DC or 45 to 440 Hz. 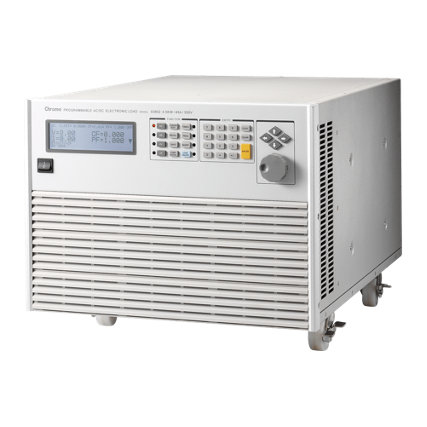 In a more compact enclosure, the model 8514B from B&K Precision can be moved from place to place for on-site DC load testing. It is part of the company’s 8500 Series of programmable DC electronic loads (Figure 5), with a maximum power of 1500 W, a maximum current of 240 A, and a voltage range of 0.1 to 120.0 V DC. It features over-temperature, over-voltage, over-current, over-power, reverse-polarity protection, and a USB port for connection to a computer.

Remember to select a load that exceeds your testing requirements so it can test the ranges and limits of voltage, current, and power needed to provide the functionality and performance required to emulate the application.