Motor controllers for use in home appliances and light industrial drives are typically designed using an intelligent power module containing gate drivers built using HVIC technology, power switches configured as a half-bridge or three-phase bridge, and protection components. The module connects directly between the motor and the processor hosting the motor-control algorithm, and replaces as many as 30 or more discrete components depending on the configuration. As an integrated solution, the intelligent power module not only simplifies design, lowers bill of materials costs and saves PCB space, but also enhances reliability and helps reduce electromagnetic interference (EMI).

In most applications the module is intended to operate without a heatsink. This further reduces bill of materials costs and simplifies assembly. However, careful thermal design is needed to ensure that the module can maintain a suitable steady-state temperature under maximum load that will enable the system to satisfy minimum reliability targets.

IR’s µIPM™ modules are widely used in heatsink-free inverters in HVAC equipment, fans, pumps, compressors and variable-speed drives up to 150W-250W power rating. The modules are packaged as 12mm x 12mm or 8mm x 9mm PQFN devices, which are designed to dissipate heat through large electrical contacts soldered down onto the PCB. The size and thickness of the PCB copper traces have an important influence on the heat that can be dissipated into ambient, and hence on the steady-state temperature of the module. Underspecifying these traces can compromise reliability, while over-specifying results in a larger and more expensive solution than is strictly necessary.

By devising an experiment that allows the steady-state temperature of a µIPM to be measured at various power levels with a variety of PCB designs, IR has developed a set of temperature-versus-power curves that provide an accurate reference for designers of motor-control systems. Using these curves can help optimise the thermal design, power rating and module operating temperature to meet all the cost, size and reliability constraints of any given application.

By connecting the IPM so that a known current is injected into the body diodes of two MOSFETs making up one inverter leg, and varying the current, enables the relationship between PCB metallisation, module operating temperature and power dissipation to be examined. The voltage drop across the two diodes is equivalent to the volt drop across the module. Hence measuring this voltage allows the module power dissipation to be calculated. The circuit diagram of figure 1 shows a simplified version of the test setup.

One of the advantages of using this approach, rather than analysing the inverter while driving a real load such as a motor, is its simplicity. The experiment is easy to setup and control, and effects such as parasitic inductance and capacitance, voltage and current spikes, and noise are eliminated. Since the objective of the experiment is to induce and measure temperature changes in response to changes in power dissipation, the method of DC current injection and the absence of these effects does not affect the accuracy of the results. 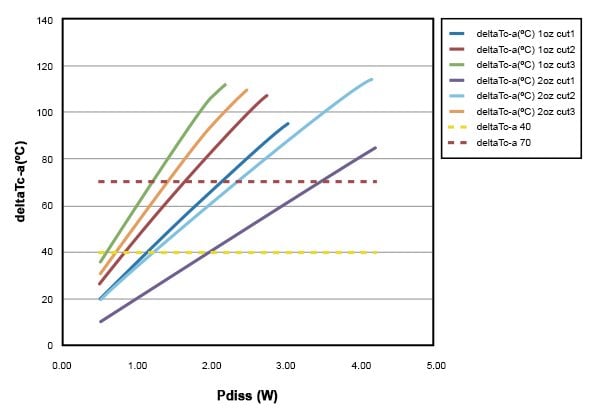 If the module is being used as part of a fan-control system, the rotation of the fan may provide some cooling effect on the surface of the module. This should also be taken into account during the thermal design of the system. To assess performance in this type of application, the test board was placed in a closed box and measured with airflow ranging between 0.8m/s to 1.2m/s on the module surface. The speed of the airflow was measured using an anemometer. Figure 3 compares the performance of two PCB metallisation patterns, with and without fan cooling. 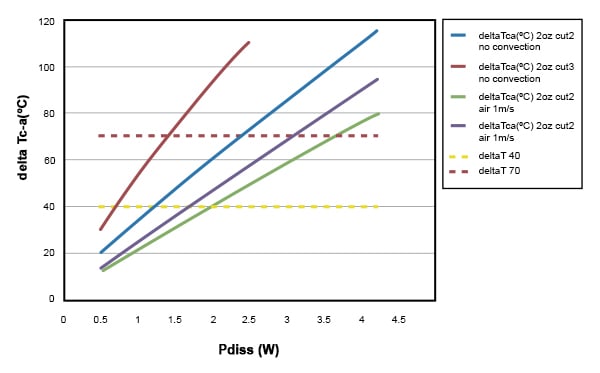 It is often desirable to be able to predict the thermal performance of the system immediately after turn-on until the point at which a steady-state temperature is reached. To assess this transient thermal performance, the system can be modelled as a thermal resistance and thermal capacitance in series. The time constant of the system can then be calculated, allowing the case temperature at any time between turn-on and steady-state to be predicted.

Using the test-PCB design with the smallest area of metallisation, a step change in the injected current was applied and the module case temperature was recorded from the time the step was applied until the temperature became stable. Since the RTH values at both the initial and final temperature are known, measuring the time constant (Tau), allows the thermal capacitance Cth to be calculated. Figure 4 illustrates the thermal time constant of the complete system, from application of the current step to achieving steady state. 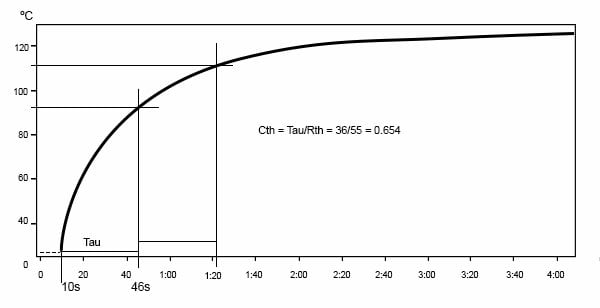 Figure 4. Thermal behaviour of the system at startup has a time constant of several minutes.

The intelligent power modules used in many low-power motor drives are housed in advanced packages that combine high thermal efficiency and small external dimensions. Since the modules are typically intended for use without a heatsink, the thermal dissipation provided by PCB traces has a critical influence on power rating and reliability.

Modelling the steady-state thermal performance and thermal capacitance of an experimental motor drive using various PCB designs has generated a set of graphs that can be used to predict system behaviour accurately enabling engineers to deliver even more economical and reliable solutions to market.

Stefano Ruzza holds a Bachelor's Degree in Electronics Engineering earned at the University of Pavia. He is skilled in the field of integrated circuits, mixed-signal as well as in power electronics. Stefano worked at International Rectifier as the Senior Staff Engineer for System design where he is responsible for the development of new smart Intelligent Power Module (IPM) consisting in multi-die ICs and Discretes components in a single package, for appliance and consumer market (washers, air conditioners, pumps).

Marco Palma holds a Bachelor's Degree in Electronics Engineering earned at Polytechnic University of Turin (Politecnico di Torino) and also has an MBA earned at SDA Bocconi. Marco worked as the Director, Systems and Applications at International Rectifier where he has the responsibility to define new smart products for appliance and light industrial market consisting in multi-die ICs in single package. His main focus is to expand the business mainly in European market and support business unit to expand further in Asia.