By using filters, researchers can shift the wavelength of sunlight into near-infrared to increase solar cell efficiency.

Solar cells are one of the keys to decarbonizing the electric power grid. By converting photons into electrical currents, they can produce energy to power the electric grid whenever the sun is shining.

Unfortunately, silicon-based solar cells are not well-matched to the solar spectrum. Light in the ultraviolet (UV) and blue end of the spectrum does not convert to electrical power as well as infrared light, wasting some of the potential energy that could be collected and making solar cells less efficient.

Matching Solar Cells to the Sun

Researchers at the New York University (NYU) Tandon School of Engineering, led by Eray Aydil in the Chemical and Biomolecular Engineering Department, have tackled this inefficiency by changing the nature of light coming from the sun. The team has developed a film that can be used on the solar cells to shift the light spectrum, turning ultraviolet and blue light (which is less efficient for solar cells) into near-infrared (NIR) light (more efficient for solar cells).

The sun, like all stars, is powered by a nuclear fusion reaction that converts masses of hydrogen into helium into energy. The interior of the sun reaches millions of degrees, but its outer surface is much cooler—around 6,000 degrees Kelvin (K). This temperature emits light in the visible, infrared and ultraviolet wavelengths.

The light energy that comes from the sun results from the creation of photons that are a product of the fusion reactions deep within the sun. It takes a photon between 10,000 and 170,000 years to travel from the heart of the sun to its surface, based on the number of collisions it makes along the way. 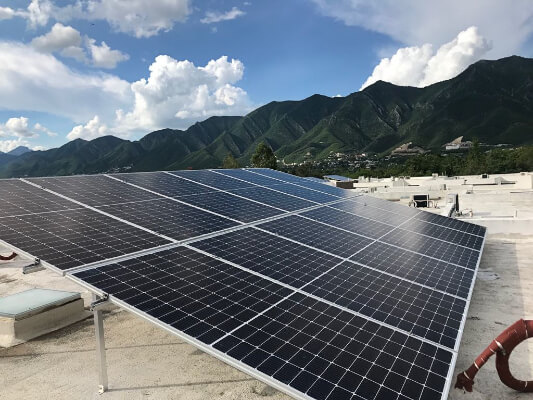 Making a Filter to Change the Sun

Coatings of Yb-doped Cs2AgBiBr6 films, vacuum deposited on glass substrates, can be used as a filter to down-convert UV and blue photons to NIR photons—the down conversion (DC) material absorbs in the UV and blue region of the electromagnetic spectrum and re-emits energy in the near-infrared (NIR) region.

Aydil's team has been able to shift more than 82 percent of the light energy from the UV and blue spectrum to the NIR region. According to an NYU news release, the team has announced that they are up to 95% and that there is a potential to push it past 100%. The team claims that “It would be possible to get two infrared photons out of every ultraviolet photon.”

There are additional benefits to shifting away from the UV range, which can cause solar cells to degrade more quickly. UV rays can also cause overheating which decreases cell efficiency and reduces service life—shifting the spectrum to NIR also solves these issues. By “Changing the Sun” the NYU team is helping to make solar power even more attractive.