Flexible perovskite solar cells (F-PSCs) also offer cost benefits. Conventional solar panels are manufactured on structures like glass, which is almost twice as costly as a photosensitive material. On the other hand, solar cells manufactured using a printing process can be much cheaper. Moreover, F-PSCs have demonstrated better long-term stability than their rigid counterparts.

However, the best-reported efficiencies of perovskite solar cells have been around 20%, which is significantly lower than that of rigid cells (25.7%). This inefficiency is due to low photocurrent due to defective contact interfaces. Researchers at Nanjing University, Jilin University, Shanghai Tech University, and East China Normal University have recently found a way to increase the efficiency of F-PSCs using new two-hole-selective molecules to bridge the photosensitive perovskite layer with the nanolayer film. 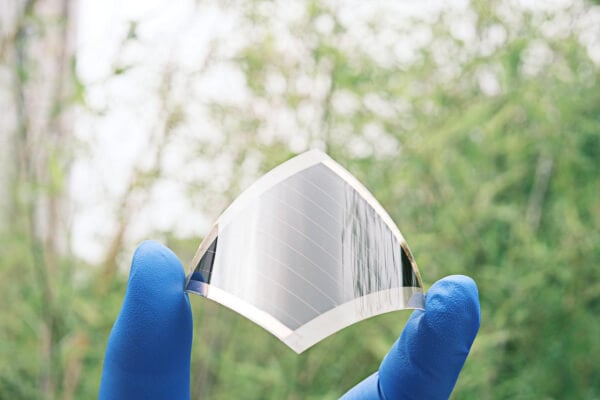 Reasons for Low Efficiency of F-PSCs

Flexible substrates are the most important components required to realize high-performance solar cells, which is the primary reason for low efficiency in these cells.

Many solar cell qualities directly depend on the substrate characteristics. One of the most critical aspects is that the substrate should optically transmit as many lights as possible to the light-absorbing material. Another aspect is the resistance of transparent conductive electrodes (TCEs). The charge collecting layers are usually deposited on the substrate as TCEs, and the sheet resistance of TCEs is strongly related to the photocurrent density of solar cells and other performance parameters.

In this study, the researchers try to overcome the problems associated with defective interfaces at the charge-selective contacts, which leads to low power conversion efficiency.

"We believe that lightweight flexible perovskite solar cells are promising for building integrated photovoltaics, wearable electronics, portable energy systems and aerospace applications," Hairen Tan, one of the researchers who carried out the study. "However, their highest certified efficiency of 19.9% lags behind their rigid counterparts (highest 25.7%), mainly due to defective interfaces at charge-selective contacts with perovskites atop."

New Molecules to Bridge the Perovskite Layer with Substrate

Past studies have suggested that solar cells using perovskite with different bandgaps can significantly enhance their efficiency. Moreover, self-assembled monolayers have shown to be very effective in increasing solar cell efficiency and overall performance. The researchers, in a similar way, tried to improve the efficiency of their flexible PSCs.

In their design, the frontal cell with a wide bandgap absorbs high-energy photons, and the posterior cell absorbs low-energy photons passed through the cell.

They used a mixture of two-hole-selective molecules based on carbazole cores and phosphoric acid to form a self-assembled monolayer (SAM). However, their findings showed that the SAM molecules could not be directly applied to the flexible substrates in the F-PSCs, and they led to a severe shunting of the solar cells.

Illustration of the solar cell and the molecular structure of bridging molecules. Image used courtesy of Li et al

The researchers, in their initial test, achieved 24.7% of efficiency. Furthermore, they investigated that the self-assembling wire can significantly improve the bending durability of the solar cells, allowing them to retain 10,000 cycles with a bending radius of 15 mm.