Researchers developed a thermoplastic resin for creating wind turbine components that can be recycled to generate household and consumer products—even gummy bears.

The unique resin material can be recycled from objects such as wind turbine blades to make other products. This can be done in a loop or circular economy system, so material waste is minimized. 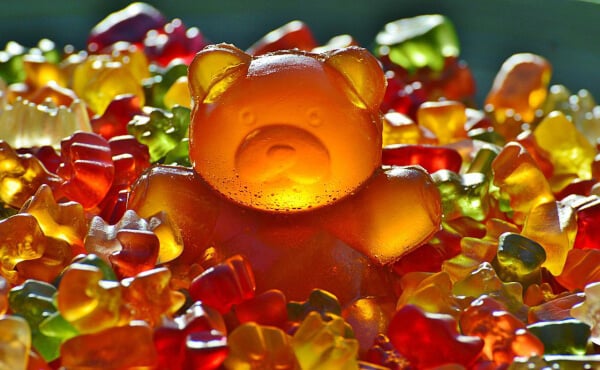 However, when you consider the manufacturing processes involved in creating wind turbines and transportation methods used to get them on-site, greenhouse gas emissions come into play. As more advanced manufacturing processes become digitized and automated, more efficient and carbon-neutral technologies are being used to mitigate this. Concerning transportation, electrification is becoming more widespread and has the potential to eliminate fossil-fuel-based transport emissions.

But what about when wind turbine blades are decommissioned? Well, some companies recycle them, using methods to turn the fiberglass material the turbines are typically made of into lower-value materials. But rather unfortunately, most out-of-service blades end up on landfill sites.

The hub height for utility-scale land-based wind turbines increased 66% from 1998 to 1999, according to the U.S. Department of Energy (DOE) Office of Energy Efficiency and Renewable Energy, reaching around 308 feet in 2021.

According to the DOE, this is about the height of the Statue of Liberty. Offshore wind farms are projected to grow larger, jumping from around 330 in 2016 to 500 feet in 2035.

The increase in hub height will also mean an increase in blade size. The larger the blade, the more energy can be captured to produce more electricity.

According to Dr. John Dorgan from MSU’s College of Engineering, larger blades are more efficient than smaller ones, so companies always look to go bigger. But again, this means more material waste. What is the answer to mitigating this waste?

According to Dorgan, the newly synthesized resin can be used to make panels strong and resilient, making it suitable for both wind turbines and automotive vehicles.

Dorgan and his research colleagues dissolved the panels in fresh monomer and removed the glass fibers. This allowed the team to recast the material to create new products, such as the next generation of wind turbines. The recast panels bore the same properties as those created initially.

In addition to reusing the resin to create more wind turbine components such as blades, it can be combined with other materials to make sinks or countertops for household use. The team produced cultured stone by mixing the resin, which Dorgan and his team have used to create a full-sized bathroom sink. The recovered material can be combined with other plastic resins for injection molding, which can be used to create consumer goods like speakers, blenders, and laptop coverings.

Not stopping there, Dorgan and his team turned from physical to chemical processing of the thermoplastic resin. By digesting the resin in an alkaline solution, the team could extract poly(methyl methacrylate) (PMMA), also known as plexiglass. This material can be used to create taillights for automotive manufacturing and other products.

Poly (methacrylic acid) was also produced by increasing the temperature during alkaline digestion. Dorgan and his team also recovered food-grade potassium lactate, which they used to make some gummy bear candies. Although Dorgan had a taste, he admitted there may be some pushback from people trying candies like this in the future.

Another hurdle is the lack of enough bioplastic material to create enormous structures like wind turbines. Dorgan expressed that there would need to be a significant production volume of the resin material to make this possible.