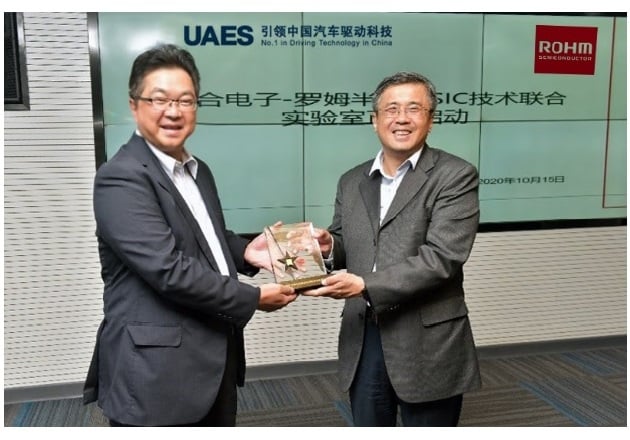 The new laboratory, located at UAES’s headquarters in Shanghai, will help expand the development of Silicon Carbide (SiC) power devices for automotive applications—a key market focus for both companies. Leaders from UAES and ROHM celebrated the new lab in an opening ceremony held in December.

The new lab contains equipment required for device and application evaluation in automotive applications such as onboard chargers and DC/DC converters.

In a press release, UAES Deputy General Manager Guo Xiaolu said, “The establishment of this joint laboratory is a testament to the deepening relationship between our two companies, and we can look forward to further technical support through this new comprehensive facility.”

ROHM Power Device Business CSO and Senior Director Kazuhide Ino further commented that the company plans to continue building on its partnership with UAES to contribute to technical innovation in the automotive sector with power solutions centered on SiC.

The automotive market is an essential focus for ROHM as it implements its new management and organizational strategy from March 2021 onwards. In its 2021 half-year presentation to investors, ROHM said it plans to release more product lineups and increase sales in several automotive areas, including air conditioner electric compressors, power control units, chargers, autonomous units, LED lighting and meter panels.

According to the presentation, sales in ROHM’s automotive segment are down 18.3% from the third quarter of 2020. Within the auto segment, infotainment fell by 7.5%, powertrain by 1.8%, ADAS by .8% and body products by 1.7% in the third quarter of 2021. Still, ROHM plans for auto sales to increase by 19% in the second half of the year, with high growth expected in its infotainment and powertrain products.