Nuclear Power Outlook: The Technology of the Future

Nuclear Power Outlook: The Technology of the Future

The past decade has been rocky for nuclear power, but it may be one path to net-zero by 2050. Here is a look at the nuclear future and the technology that could get us there.

Nuclear power produces nearly carbon-free electricity. According to the U.S. Energy Information Administration (EIA), fossil fuel-based power plants burning coal, oil, or natural gas create about 60 percent of the nation’s power. But fossil fuels produce carbon dioxide (CO2) that collects in the upper atmosphere and contributes to climate change, and over 40 percent of energy-related CO2 emissions in the U.S. are due to the burning of fossil fuels for electricity generation. 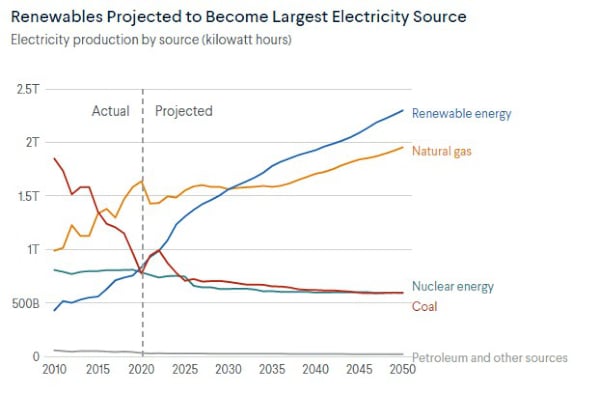 To address climate change, zero-emission resources will need to more than double by 2050 as fossil fuels are phased out.

Most of the nuclear power plants in the U.S. that supply 20 percent of power to the grid were built 25 to 40 years ago, with a designed useful life of roughly 35 years—the average age of the current fleet is 39 years. The clock is ticking.

Nuclear power has long been a popular and easy target for naysayers and critics. However, the need to switch from fossil fuel to zero-emission resources will keep nuclear power options on the table. To cut net carbon emissions in half by 2030 and be net-zero in carbon emissions by 2050, we will need to replace 60 percent of the current grid with something.

If we, as a society, decide to replace those aging nuclear power plants with more nuclear energy it doesn’t necessarily mean we have to replace them with traditional designs that are several decades old.

Most of the current fleet are light-water reactors (LWRs) that use water to cool the reactor. The basic design is from the 1960s and they are sized as large as possible to maximize reactor efficiency with individual units usually producing greater than 1 gigawatt (GW) of electricity.

There are new nuclear power concepts under development. Among these are modular reactors (SMRs) or micro-modular reactors. Capable of generating up to 300 MW (megawatts) of electricity SMRs, unlike today’s massive centralized nuclear power plants, can be deployed in a distributed power network. The smaller size of these reactors allows for passive cooling instead of the large-scale active cooling an LWR needs, meaning reduced water consumption and less effect on fragile environments. Newer fuels and smaller amounts of uranium make these devices safer, particularly in the event of an incident.

Because they are less efficient than traditional LWRs, small, distributed reactors will probably cost more per megawatt, but new construction techniques and a reduction in the absolute capital required to build (admittedly) smaller plants could reduce licensing and permitting as well as construction time.

For all the cost, complexity, scale, and dread associated with a nuclear power plant, the concept behind creating a nuclear fission reaction is actually fairly simple.

Neutrons are used to hit the nucleus of a uranium-235 or plutonium atom that makes up the reactor’s fuel, splitting the nucleus into two smaller nuclei and releasing energy and more neutrons in a process called fission. The neutrons that are released can hit more nuclei creating a chain reaction. If left unchecked the result is an atomic bomb. To moderate the fission reaction control rods that absorb neutrons are inserted into the reactor core, slowing the reaction. The energy created by fission is in the form of heat that is used to create steam that runs a turbine that powers an electrical generator.

Eventually, after several years of operation, the nuclear fuel is used up and spent fuel (which is highly radioactive) must be stored—first in pools of water adjacent to the nuclear plant as it cools, and eventually in storage casks. The fuel's radioactivity means it needs to be safely stored for as long as 100,000 years—the problem of where and how to do this has yet to be adequately addressed as few people are happy to have high-level nuclear waste stored in their backyard.

Can Nuclear Fusion be Achieved?

Then there is nuclear fusion. It is how the sun produces its almost unimaginable energy. Two hydrogen atoms collide to form a helium atom and release a massive amount of energy. Sustained at scale, a fusion reactor would have the potential to produce safe, clean, and almost inexhaustible power. Unfortunately, there is an old industry joke that nuclear fusion is just 30 years away and always will be.

At present, after decades of work, fusion has been achieved in experimental laboratories, lasting a few seconds. There are challenges—the hydrogen must be at hundreds of millions of degrees for the fusion reaction to occur and the only way to contain it is within an ultra-powerful magnetic field. A fusion experiment rarely produces more energy than the system uses to create the fusion between hydrogen atoms. Still, experts predict we might be about 30 years from a workable fusion reactor.

Is There a Nuclear Future?

In the United States, the outlook for nuclear power is unclear. Although nuclear power is generally safe, there have been accidents. The partial meltdown of a reactor at Three Mile Island in the U.S. in 1979 was notable, as was the world’s worst nuclear disaster in Chornobyl in Ukraine in 1986. Then there was Fukushima.

On March 11, 2011, the largest earthquake ever to hit Japan (magnitude 9.0) struck the island nation. The earthquake triggered sensors that automatically shut down the reactors at the Fukushima Daiichi Nuclear Power Plant.

Unfortunately, because the earthquake was centered 45 miles offshore, a tsunami wave up to 46 feet high swept inland and inundated the mainland, causing more than 20,000 people to lose their lives. The flooding reached the nuclear power plant and knocked out the generators that were being used to power pumps that were dissipating the decaying heat from the nuclear reactors. This resulted in a loss of reactor core cooling, causing three of the six nuclear cores to meltdown, three hydrogen explosions, radioactive contamination in several reactor buildings, and radiation released into the atmosphere. The Japanese government declared a 20-kilometer evacuation zone around the plant, causing 110,000 residents to be evacuated.

Despite the severity of previous disasters and the resulting public outcry, Fukushima galvanized the world’s governments to rethink their position on nuclear energy.

The Aftermath of Fukushima

A year after the earthquake all but two of Japan’s nuclear reactors had been shut down (several have since restarted.) Because of Fukushima, Germany accelerated its plans to phase out nuclear power by 2022. Switzerland and Belgium will also phase out nuclear power while Italy and Spain have decided against building new plants. France, a country that gets 70 percent of its electrical power from nuclear has announced intentions to reduce that to 50 percent by 2025. Meanwhile, after a brief pause following Fukushima, China, Great Britain, India, South Korea, and Russia are all moving ahead with their nuclear goals.

The U.S. Senate requested the Department of Energy (DOE) “to give priority to developing enhanced fuels and cladding for light water reactors to improve safety in the event of accidents in the reactor or spent fuel pools.”

After reaching peak production in 2007, U.S. nuclear capacity has undergone a constant reduction every year. Despite its earlier claims in 1954 by the Chairman of the Atomic Energy Commission that electricity from nuclear power would be “too cheap to meter,” it has turned out that renewables like wind and solar, and even fossil fuels like natural gas are better economic solutions.

Although natural disasters like earthquakes and hurricanes pose challenges to safe nuclear power plant operation, it turns out that war is also a significant and growing danger. Zaporizhzhia Nuclear Power Station, Europe’s largest nuclear power plant, is located in a Russian-occupied portion of Ukraine. With a war currently underway in that country, and despite the plant still in operation, there are reports of shelling into and around the nuclear facility.

U.N. Secretary-General Antonio Guterres warned recently that "any attack to a nuclear plant is a suicidal thing."

CBS News also noted that Russian news agencies quoted the Moscow-backed rebels who control the territory as saying Ukrainian forces had fired the shells. Although nuclear power plants are designed to survive direct strikes by terrorist-flown airliners, they cannot withstand direct attacks by weapons of war.

In the decade since the earthquake and tsunami, buildings and roads in the surrounding region have been rebuilt, but the Fukushima nuclear disaster continues.

Decontamination efforts have allowed many villages in the vicinity of the plant to reopen allowing people to return to their homes—but there are still nearly 37,000 people listed as Fukushima evacuees and many say they won’t return. Japanese government studies over the past 10 years have not seen an increase in cancers or other radiation-linked diseases among Fukushima’s population.

The soil, plants, surface water, ocean, and ocean floor have all been contaminated by radioactive materials released by the accident at the plant. In 2021, the Japanese government approved a plan to release more than one million tons of treated but still contaminated and radioactive water from the plant into the Pacific Ocean over a course of the next 30 years—the local fishing industry has strongly opposed the move.

Could what happened at Fukushima ultimately kill nuclear power?

With wind and solar rapidly growing it would be easy to dismiss nuclear energy as a technology that is too dangerous or outmoded to power the future grid. Wind and solar are intermittent sources only producing electricity when the sun shines or the wind blows. If we are to be serious about removing carbon-intensive fossil fuels and reaching net-zero by 2050, it’s hard to see how it can be accomplished without a contribution of nuclear power to the electricity grid.