Using V2G-technology, peak demand on the electricity grid can be better balanced, by allowing electric vehicles to not just take power from the grid, but also return it to the network and expect to introduce a new potential earnings model for electric drivers. 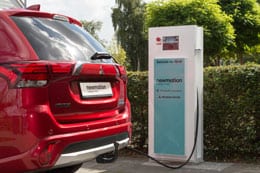 In this demonstration, MMC will provide services for capacity reserve and balancing services by utilizing charging infrastructure of NewMotion and Mitsubishi Outlander PHEV parked at home or at work-place in the city of Amsterdam linked to Nuvve's Grid Integrated Vehicle platform (GIVe). There are more than 25 thousands of Mitsubishi Outlander PHEVs available in the Netherlands.

In Europe, the Paris Agreement adopted in 2015 has resulted in the acceleration of initiatives to facilitate a low-carbon society, including the aggressive promotion of environmentally-friendly policies aimed at achieving renewable targets. As solar, wind and other renewable sources, which are intermittent, replace fossil fuels as a source of energy and enter mainstream power grids, stabilizing the power supply also poses a challenge.

Besides, both UK and France governments have plans to prohibit the sale of fossil fuel vehicles from 2040, and the flow of electricity is accelerating. Hence, a new mechanism to reduce the burden on charging electricity infrastructure is required.

MMC will verify the technology of V2G through this demonstration and aim to create new value and business opportunities utilizing electric cars / vehicle storage batteries.