After mostly recovering from pandemic-related restrictions and supply shocks, several power electronics companies are now reporting another hurdle: A sudden drop in consumer demand. In this article, we’ll review this and other trends found in a handful of companies’ latest earnings reports.

Overall, earnings in the information technology sector declined by 8.6% in the third quarter, according to estimates compiled by FactSet in its Earnings Insight report. With that, FactSet expects the sector’s year-over-year earnings to fall 4.1%.

Macroeconomics is a key theme here, as inflation and other global headwinds continue to rattle the market at scale. Consumer technology demand, in particular, has seen a sharp decline recently. Electronics and appliance sales are down 5% so far this year, per the Census Bureau’s estimated monthly retail sales release. Another report from NPD Group forecasts a 6% drop in consumer technology sales in 2022.

The largest player by market cap on this list is Nvidia, which released its second-quarter earnings in late August. The Silicon Valley-based electronics giant reported $6.7 billion in revenue, up 3% year-over-year but down 19% from last quarter. Its hardest-hit segments were gaming and professional visualization, which fell by 44% and 20% this quarter.

Despite that decline, Nvidia reported strong numbers across its other key sectors. Revenue from its data center business swelled 61% year-over-year and 1% quarterly, while its automotive business grew 45% from a year ago and 59% from last quarter.

In its investor presentation, Nvidia said supply chain disruptions continued to impact its data center business, despite its growth in earnings. But crucially, a sudden slowdown in consumer demand hit Nvidia’s gaming segment—largely dominated by its popular GeForce GPU and RTX products. This prompted Nvidia and its partners to adjust inventories and pricing. 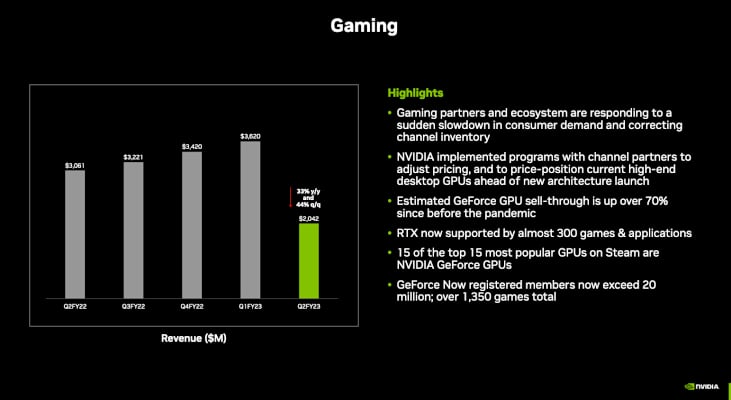 In its third-quarter outlook, Nvidia expects its gaming and professional visualization revenue to decline sequentially as original equipment manufacturers and channel partners adjust their inventory levels to match demand and prepare for future next-generation releases. However, the company expects that decline to be partially offset by quarterly growth in its data center and automotive segments.

In a statement last month, Nvidia Founder and CEO Jensen Huang reaffirmed that the company is working on its supply chain transitions, even in the difficult macroeconomic environment.

Dallas-based semiconductor giant Texas Instruments (TI) reported its second-quarter earnings in July, with $5.2 billion in revenue and $2.29 billion in net income. Its revenue marks a 14% jump from the same time last year and a 6% jump sequentially.

Dave Pahl, head of TI’s investor relations, mentioned in the earnings call that the easing of COVID-19 restrictions in China is a key part of the context of this quarter’s markets.

Revenue from TI’s analog and embedded processing segments increased by 15% and 5%, respectively, from Q2 2021. Per the earnings call transcript, TI’s industrial revenue grew in the high-single digits, automotive revenue rose by 20%, communications equipment was up about 25%, and growth in enterprise systems revenue reached the mid-teens. However, Pahl stated that the company saw weak sales in personal electronics, which grew in the low-single digits.

Looking forward, TI is expecting $4.9 billion to $5.3 billion in revenue for the third quarter. In July’s earnings call, TI CFO Rafael Lizardi said this outlook considers the weaker demand from customers in the personal electronics market.

Idaho-based Micron Technology, a leader in computer memory and storage systems, reported $8.64 billion in revenue for the third quarter, up 11% sequentially and 16% year-over-year.

In announcing the results in late June, Micron President and CEO Sanjay Mehrotra said the company had reached record revenues in the auto, industrial and networking markets, and in SSDs for client and data center customers. Further, Micron’s NAND business delivered record revenue for the quarter, marked by all-time highs in its embedded business and storage business units.

Micron’s revenue growth was spread across virtually all of its business units. Its compute and networking business is up 13% from last quarter, driven by data center, graphics and networking sales. Its storage business is up 15%, bolstered by record SSD revenue, and its embedded business rose 12%, thanks to more record-setting automotive and industrial revenues. And even though its mobile business unit clocked a 5% uptick in revenue last quarter, it’s still down 2% year-over-year due to lower smartphone demand.

Looking forward, Mehrotra says that even though industry demand has weakened, the company is moving to moderate its supply growth in 2023. Further, consumer demand and inventory-related headwinds are expected to impact its outlook for the fourth quarter.

However, Mehrotra added that the company is confident about the demand for memory and storage, as well as its competitive position. 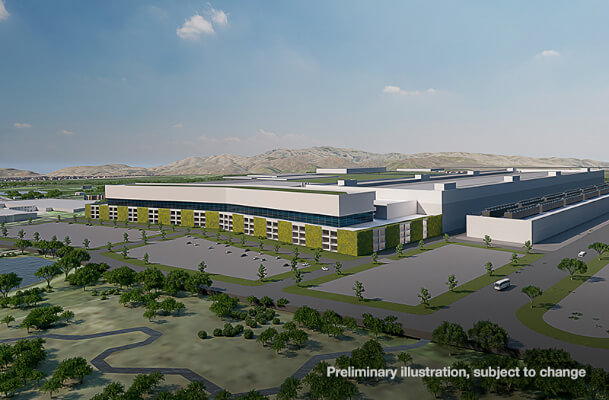 Relatedly, Micron has been expanding its U.S. manufacturing capacity to the tune of $40 billion. Most recently, it broke ground on a $15 billion advanced memory manufacturing plant in Idaho, expecting production to start in the second half of the decade.

German semiconductor manufacturer Infineon reported $3.6 billion in revenue in the third quarter, up 10% from last quarter and 33% year-over-year. Its automotive (ATV) segment—which accounts for nearly half of its total revenue—grew by 14%, in part thanks to higher volumes from a ramp-up in manufacturing capacity. Its power and sensor systems (PSS) segment revenue grew by 10% due to high demand across servers, industrial applications, and silicon microphones. Meanwhile, its industrial power control (IPC) and connected secure systems (CSS) segments registered small increases of 1% and 2%, respectively.

In a statement last month, Infineon CEO Jochen Hanebeck said that despite the difficult macroeconomic climate, the company remains in a good position because of its differentiating portfolio. Still, economic growth continues to be stalled by increases in energy costs, raw material prices and interest rates, the ongoing pandemic and geopolitical uncertainties, and a recent decline in consumer-targeted end markets.

As for its outlook, Infineon expects around $3.9 billion in revenue for the fourth quarter, anticipating significant growth in its IPC segment, average growth in ATV and PSS, and low single-digit growth in CSS.