Modern computing systems demand high-speed operation and reliability. Today, our computer systems are faster than ever with the capability of performing tasks like machine learning and deep learning. Latest computers and laptops integrate multiple cores and graphical processing units inside the processor for high performance. As a result, the number of transistors inside the chip has increased. Due to several interconnections and passive elements inside the chip, the flow of current generates heat. Latest processors require a high amount of power for performing complex tasks, and so, the amount of heat generated is also high.

Why is Thermal Management Critical?

Even if the heat generated is not enough to burn the chip or to make the components unreliable, it can still degrade the performance of the system. Every processor has a base frequency, for example, 200 MHz. The overclocking feature inside the processor multiplies this frequency depending on the workload and the processor temperature. Let's say you need 2.6 GHz of operating frequency for a task, then the overclocking operation takes place and multiplies the base frequency by 13 and upscales it. But whenever there is a need for overclocking, the system checks for the thermal overhead. If the temperature is right and there is enough thermal overhead, the system will overclock. The amount of time it performs tasks at this speed also depends on the temperature. If the system hits 100 degrees Celsius while operating, the system will start throttling back to keep itself from overheating.

Thus, excessive heat in processors degrades performance, and in some cases, may lead to an unstable operation. In addition to this, highly concentrated heat on the chip requires extra energy to prevent processors from overheating, increasing the overall power consumption.

To solve this problem of thermal management, researchers from the University of California, Los Angeles (UCLA) have developed a novel ultra-high thermal management material in 2018. They developed defect-free Boron Arsenide in their lab and found it to be highly effective in terms of thermal management. The team recently successfully demonstrated the material's effectiveness by integrating it into high-power semiconductor devices.

The increased amount of transistors helps make computers faster but also generates more heat spots in a highly condensed space. To spread this highly concentrated heat, passive spreaders are commonly used. These spreaders are made of high thermal conductivity materials like copper, aluminum, or diamond. The researchers found that their developed boron arsenide is more effective in drawing and dissipating heat than diamond and Silicon Carbide (SiC). 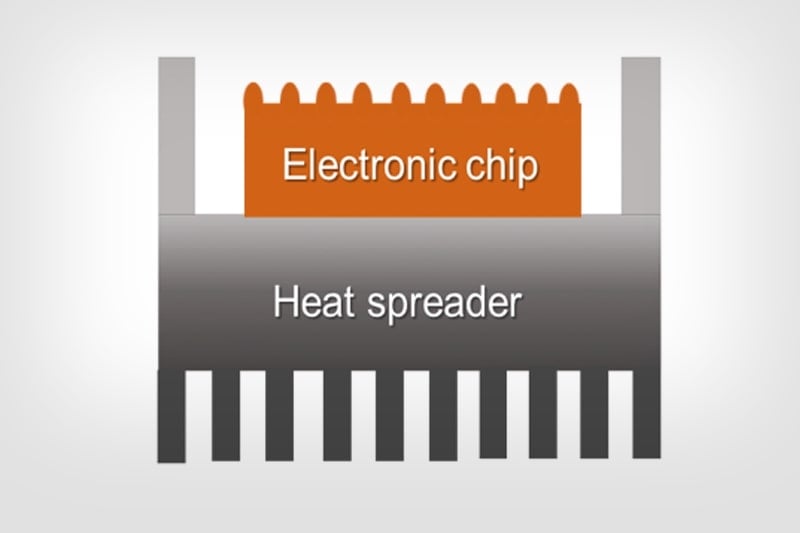 According to Yongjie Hu, an associate professor of mechanical and aerospace engineering at the UCLA Samueli School of Engineering, boron arsenide is ideal for heat management because it not only exhibits excellent thermal conductivity but also displays low heat-transport resistance.

As a part of this study, researchers experimented using computer chips with wide bandgap GaN transistors, also called high-electron-mobility transistors (HEMTs). They found that when running at near-maximum capacity, chips that used boron arsenide as a heat spreader showed a maximum heat increase from room temperature to around 188 degrees Fahrenheit. This increase in heat is substantially lower than the chips with diamond that showed temperatures rising to approximately 278 degrees Fahrenheit, or SiC showing a heat increase to about 332 degrees Fahrenheit. 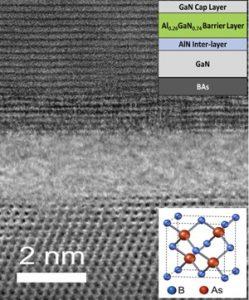 The team developed another heat-spreader material, boron phosphide. The researchers believe that their successful demonstration of boron arsenide as a heat spreader into a HEMT-chip design opens up the path for industry adoption of the technology.

The research was led by Yongjie Hu. In addition to Hu, other co-lead authors on the paper are UCLA graduate students and members of his research group Joon Sang Kang, Man Li, Huan Wu, and Huuduy Nguyen. Co-author Toshihiro Aoki of the Irvine Materials Research Institute also contributed to the study, conducting microscopy measurements.