The new drivers feature digital current sensing and are designed for applications powered by 12V batteries.

The VN9D30Q100F and VN9D5D20FN will serve to simplify both hardware and software design for devices such as automotive electronic control units (ECUs) and to increase overall electrical reliability. 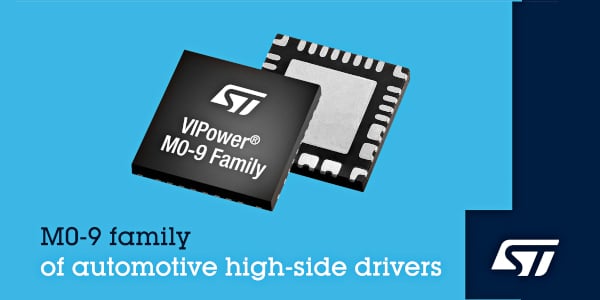 The new devices join a group that leverages ST’s VIPower M0-9 technology, combining a 40V vertical MOSFET with 3.3V digital logic. Also included is the MOSFET’s driver as well as sensing, protection, and a 4-wire SPI interface. The drivers are presented in a 6mm x 6mm QFN package. ST maintains that the small size and the high level of integration presented by the VN9D30Q100F and the VN9D5D20FN will allow designers to save up to 40% of board space as compared to competitive solutions.

The Two New High Side Drivers

Both high-side drivers feature a 24-bit SPI interface and are aimed at automotive applications. VCC for both units is specified at 28V. The VN9D5D20FN is a four-channel driver while the VN9D30Q100F offers 6 channels. In the table below, the current limitation is noted as ILIM

Both devices integrate a pulse-width modulation (PWM) generator that offers a resolution of 0.1%. This capability makes a control signal available at each output to more easily enable capabilities such as lamp dimming.

Diagnostic analog circuitry includes a 10-bit ADC providing digital readouts of case temperature and load current, eliminating reliance on the host MCU’s ADC. Because the ADC is synchronized to the driver’s PWM, the diagnostics of the separate output channels are performed during the correct time, again with no reference to the host MCU.

VDD is the input voltage powering the units’ SPI interface and internal digital control. It is compatible with 3.3 and 5V sources. IDD is the current drawn by this input. When either of the devices is on standby, IDD is just 5A typical and 35A maximum.

This comes into play in the event that a system failure removes the control of the host MCU. It is effected through two one-time programmable (OTP) inputs, which controls the operation of the driver in the event of this occurrence.

AUTOSAR is a transnational alliance vehicle with OEMs and suppliers of related electronics, semiconductors, and software. Because the two new drivers operate independently of the application, the task of software development is made easier, and AUTOSAR compliance is simplified.

Members of the new series replace relays and fuses in applications such as: