Ricoh Company Ltd. has announced the launch of the world's first solid-state dye-sensitized solar cell (DSSC) modules, the Ricoh EH DSSC series. This latest innovation from Ricoh can generate electricity from indoor light and harvests energy to allow electronics to maintain a charge.

In today's Internet of Things (IoT) society a solution for affordable, renewable energy that can be produced indoors without reliance on natural light is crucial to empowering digital workplaces and day-to-day lifestyles. Inventing a solution of this kind has been a long-term goal of the Ricoh innovation team.

DSSC technology works by mimicking the photosynthesis process, replacing chlorophyll with light absorbing dyes. Incoming light then excites molecules to a higher energetic state and the energy produced is collected by a structure of electrolytes and catalysts, replicating the structure of a leaf in photosynthesis.

You may also like: 22mAh Lithium-Ion Battery Features Rapid Charging to 80% in 20 Minutes

While DSSC technology has long been lauded as an affordable way to generate electricity, safety concerns have prevented it from being used in commercial applications. Traditionally in a liquid state, the iodine and organic solvents used in the process can easily be volatized and leak.

By developing a DSSC consisting of an electrolyte made with only solid-state materials, the Ricoh EH DSSC series eliminates the liquid-based safety concerns. In addition, it achieves higher power generation efficiency under weaker light sources, such as in warehouses, because the organic dyes used work most optimally with the wavelengths of indoor light sources.

The largest sensor in the new series, the Ricoh EH DSSC5284, is currently being used for the desk "Loopline T1", an office desk created by Taisei Corporation and Design Office Line. It is equipped with DSSC cells allowing mobile devices sitting on top of the table to maintain a consistent charge during a full day of work. 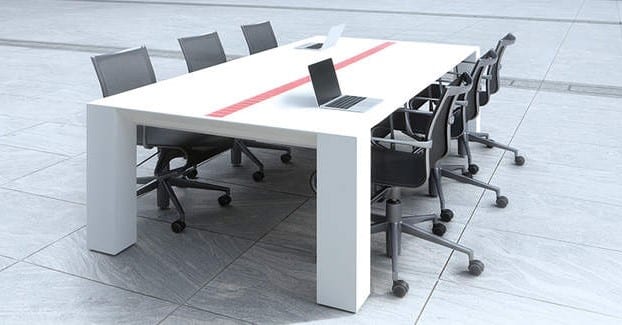 "We recognize the need - both within business and society - to identify new sources of renewable energy. In today's IoT era, we are even more committed to our energy harvesting efforts," said Tetsuya Tanaka, General Manger, Energy Harvest Business Center, Ricoh. "Originally, our DSSC technology applied the organic photoconductor technology that we developed to drive our multifunction printers.

The Ricoh EH DSSC series is currently available in red cells. By changing the color of the dye used, the color can be changed. Ricoh is currently developing see-through transparent cells for use on devices like cell phones.