NGK Insulators, Ltd. announced that it commenced mass production of EnerCera Coin, a coin type cell in the EnerCera series of power sources for IoT devices in December. NGK further announced that it has successfully developed a new high heat resistance type cell that can operate at 85°C, and that it will start shipping samples of this cell. According to NGK, this cell is the world's first lithium-ion secondary battery capable of operating at 85°C.

EnerCera Coin will be available in three cell types. There will be a high capacity type cell and a high heat resistance type cell for circuit boards, mountable with reflow soldering, as well as a high power type that is currently under development for use in wearable devices such as smart watches. Going forward, NGK will seek to increase adoption of the three cell types in IoT devices.

NGK has so far provided shipments of EnerCera Coin samples to numerous device manufacturers. EnerCera Coin has a small and thin body, yet still has a large capacity and supports high-temperature mounting on circuit boards with reflow soldering. For these reasons, NGK has obtained a reasonable expectation that several device manufacturers will adopt EnerCera Coin. Accordingly, NGK decided to commence mass production of the high capacity type cell from December.

You may also like: Harmonizing Energy-Autonomous Computing and Intelligence 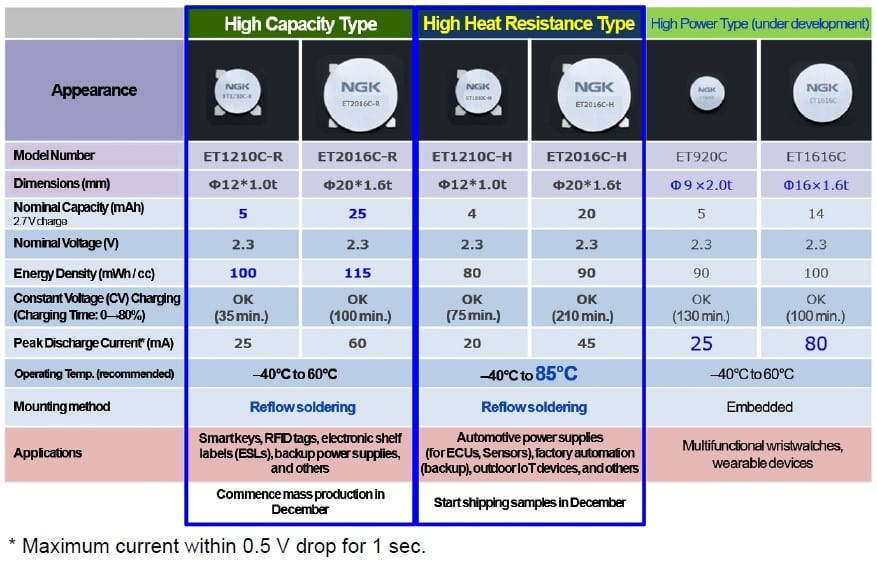 As a result, NGK has realized the world's first-ever Li-ion secondary battery with an operating temperature of 85°C. The high heat resistance type cell has the performance capability to maintain at least 95% of its capacity even after 1,000 charging and discharging cycles at 85°C. As such, it is optimal for use in automotive equipment, factory automation applications, and outdoor IoT devices.

The EnerCera series is a Li-ion secondary battery with a high-energy density and small and thin body that uses NGK's original Crystal Oriented Ceramic Plate as electrodes. With its high heat resistance, the EnerCera series stands out for its compatibility with high-temperature mounting on devices.

The EnerCera series has two types: EnerCera Pouch, a thin type that can be embedded by hot lamination in IC cards, and EnerCera Coin, a coin type. NGK has already commenced mass production of EnerCera Pouch from April 2019, with products shipped to customers such as smart card manufacturers.