Customers have the choice: either to increase the power for the Easy 2B module by replacing the IGBT4 with IGBT7 technology, or to reduce the footprint for the same power by replacing the Easy 2B IGBT4 with the Easy 1B IGBT7 in specific cases. Like the previously launched TRENCHSTOP IGBT7 Easy modules, the new current ratings perfectly fit the design needs of industrial drives.

The TRENCHSTOP IGBT7 chip, compared to previous generations, provides higher power density, greatly reduced losses, and offers a high level of controllability for drives applications. All modules equipped with this new chip technology are designed to be backward pin compatible with the former generation TRENCHSTOP IGBT4 modules. This supports manufacurers in reducing the design cycle for any new inverter platform. 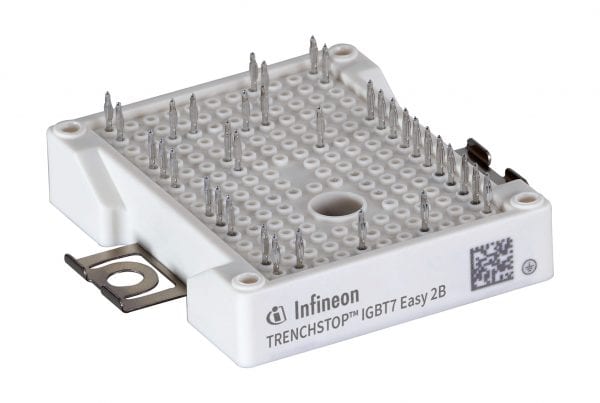 Based on the new micro-pattern trench technology, the TRENCHSTOP IGBT7 chips have a much lower static losses compared to the IGBT4 chips with the on-state voltage reduced by 20 percent. This brings significant loss reduction in the application, especially for industrial drives, which usually operate at moderate switching frequencies.

The power modules feature a maximum allowed overload junction temperature of 175°C. Additionally, they have been designed for softer switching.

The complete 1200V TRENCHSTOP IGBT7 EasyPIM™ and EasyPACK™ portfolio can be ordered now. Based on the customers’ needs, solder pin and TIM variants complement the offering.