EPC’s CEO and Co-Founder Alex Lidow talks about GaN's biggest application areas and how GaN is in it for the long haul.

While Lidow notes that much of the education and discussion surrounding GaN has come from EPC over the years, he also credits other semiconductor groups with pushing the conversation and use of GaN forward.

“A lot of credit goes to Navitas and Power Integrations — they have popularized GaN and they took away the fear of being first, where very few people in this world could be first with GaN,” Lidow said. “So the pragmatists and the late adopters are now flooding into GaN with this fear of missing out.”

With a growing presence in the power industry, EPC hosted eight educational seminars and technical sessions on GaN at this year’s APEC. The topics ranged from converter devices for servers to FETs to ICs for motor drives.

Here are the applications where EPC and Lidow see the most growth for GaN:

When designers are tackling these servers, space is invaluable. Lidow said they are in need of these 48V devices to be as dense as possible.

“I think in the next year we’ll see the power ratings go from 300W where it’s currently in volume production to 500W, 750W and 1kW,” Lidow said. “It’s a rapidly evolving area.” 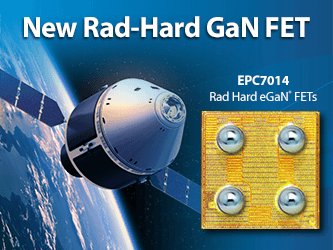 “It is another example of where GaN is getting to dominate all new applications in space,” Lidow said. “And the reason is that GaN is intrinsically hard.”

To address the needs of eMobility bikes and scooters, drones, and robots, EPC also announced the expansion of its eGaN FET family with the EPC2065, 80V eGaN FET, and the EPC2054 a 200V eGaN FET. 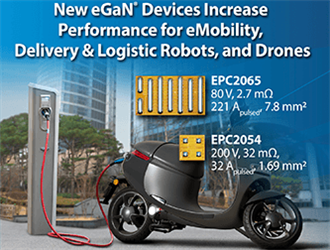 “EPC is focusing our GaN on the 48V node, so motors for robotics and drones and e-bikes are where that’s at,” Lidow said.

When EPC first entered the automotive market seven years ago, most GaN products were used in headlamps. And now, with hundreds of thousands of EPC GaN products in headlamps on cars around the world, Lidow said the company’s “legacy chops” are propelling GaN toward future automotive applications.

Roughly two years ago, EPC began focusing its efforts on 48V bus technology. After meeting with tier one automotive manufacturers, Lidow said he and his team were validated in their focus on 48V systems.

“It went from a ‘maybe in the future,’ to now regulations in place are requiring it,” Lidow said.

As for the European auto market, Lidow says, with the Euro 7 Emissions Regulations set to take place by 2025, all European cars must have 48V systems.

“This means we need to be producing 48V to 14V power supplies so that we can support legacy systems,” Lidow said.

With an already established line of automotive products, Lidow says there are a number of 48V to 14V systems in development for mild hybrid vehicles.

“All of these markets in the next couple of years or so, are set to adopt GaN,” Lidow said. “Some of them are already down the pipeline and some of them are just starting. But all of them are on this trajectory.”