The 501 PGM-ST series devices are available with rated voltages of 400V, 450V, and 500V and capacitance values from 1000µF to 18 000µF. Featuring a cylindrical aluminum case insulated with a blue sleeve and pressure relief in their sealing disc, the new 501 PGM-ST capacitors offer a high rated ripple current to 30.2A and a useful life of 5000 hours, both at + 85°C. The capacitors are lead (Pb)-free and RoHS compliant.

As polarized aluminum electrolytic capacitors with a non-solid electrolyte, the 501 PGM-ST capacitors are suited for applications that demand high energy storage in a small form factor. The 500V rating provides increased voltage headroom in motor drives, UPS, and solar inverters by allowing three-phase, 380V designs to be re-used in 480V systems by simply upgrading the dc-Link capacitors and enables solar inverter systems to be upgraded for 1000V maximum input. 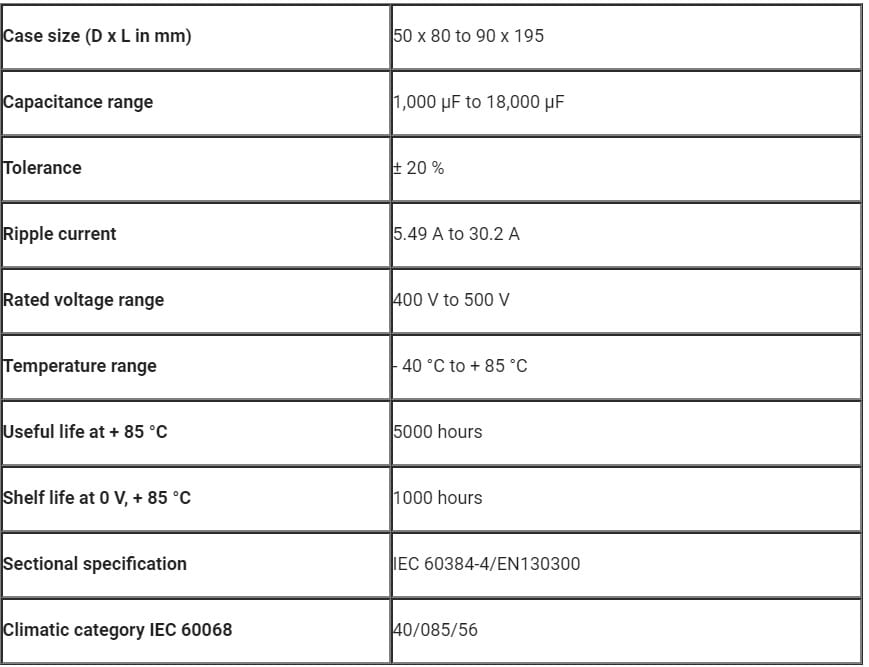 Samples of selected values for the 501 PGM-ST capacitors are available now. Production quantities are available with lead times of 18 weeks. Pricing per piece depends on case size, voltage, and capacitance. For example, a 3300µF / 400V device in a 65mm by 105mm case will be priced at approximately $16.00 per piece in 1000 piece quantities.