A collaborative team of researchers from universities across France has developed a fiber-optics-based technique for observing and monitoring battery chemistry.

A team of researchers from the Collège de France, the French National Center for Scientific Research (CNRS), Université Rennes 1, and Université de Montpellier have developed a method for monitoring the changes in commercial sodium- and lithium-ion (Li-ion) battery components as they undergo charging and discharging. The research was published in the journal Nature Energy. 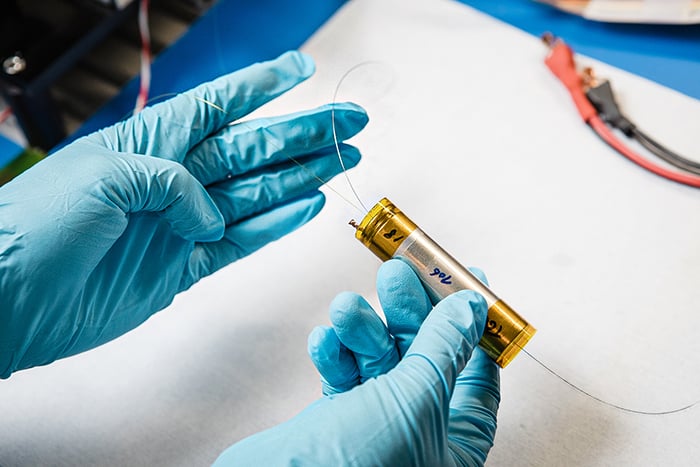 An image of a battery intersected by an optical fiber made of chalcogenide glass. Light is transported in the infrared light range allowing the identification and tracking of chemical molecules. Image used courtesy of CNRS

A battery is an electrochemical device that can convert chemical energy into electrical energy. It consists of a positive and negative electrode (corresponding to the cathode and anode, respectively), the electrolyte, and another component formed during the first few rounds of charging, a passivation layer called the solid-electrolyte interphase (SEI) layer.

The SEI layer is formed by the decomposition of electrolytes during initial charging cycles. The SEI can be thought of as a protective layer on the surface of the electrode. It prevents corrosion, ensures electrical contact with the electrolytic fluid, and facilitates ion transport. Essentially, the SEI is a key component ensuring battery stability and longevity.

The researchers used optical fibers made of chalcogenide glass to transmit infrared light through a battery. This illuminated chemical molecules within the battery and allowed them to be monitored.

The researchers reported observations of the extraction/insertion of sodium and Li-ions in the battery electrodes as a charge function. The researchers could also observe electrolyte evolution and study the interface between the SEI and electrolyte. 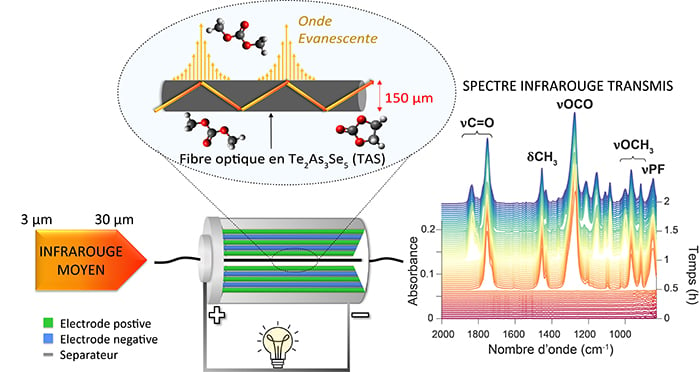 An image depicting the passage of infrared light as it movies through a glass optic fiber within a battery. Image used courtesy of CNRS

The research team observed the manner of the chemical species underlying the nucleation and growth of the SEI, in situ, during the first charge of a battery. Nucleation occurs spontaneously during charging when chemical reactions cause ions to accumulate and form crystals near the electrode.

Finding the best conditions for SEI formation can involve time-consuming work implementing charging test protocols and optimizing electrolytes. With their new methodology, the researchers believe it will be possible to assess dynamic battery processes more quickly and accurately, which will help improve battery performance and longevity.