The World of Lithium Ion Batteries

The World of Lithium Ion Batteries

Lithium ion (Li-ion) batteries are one of the most widely used rechargeable battery types, especially for mobile devices such as smartphones, tablets and laptops, and in electric vehicle applications. The continually growing interest in Li-ion technology and applications translates to a forecast CAGR of over 20%, and a market of approximately $100 billion by 2025.

This article provides an overview of the history of Li-ion batteries, leading up to the recent Nobel Prize, and it examines the technology in modern applications, including detailed cross-section images that show how the technology is implemented. The 2019 Nobel Prize in Chemistry was awarded to M. Stanley Whittingham, John Goodenough, and Akira Yoshino “for the development of lithium-ion batteries”.

Whittingham developed the first Li-ion battery in the early 1970s. It was based on a metallic lithium anode, which unfortunately would chemically react with the electrolyte leading to instability and the growth of lithium whiskers that could result in an explosion. Goodenough discovered that the use of intercalated lithium cobalt oxide material in the cathode was able to generate almost 4 V, which was twice the 2 V generated by Whittingham's battery.

Finally, Yoshino at Asahi Kasei Corporation developed the use of graphite for the anode. Initially, they used petroleum coke, but graphite was found to be better. The Li-ion intercalated into the layered graphite material, giving a major advantage since no free metallic Li is used in the battery. In 1991 the Li-ion battery was commercialized by Sony and Asahi Kasei Corporation. In the year 2000, Samsung SDI began manufacturing Li-ion batteries at their plant in Cheonan, Korea. Li-ion batteries are now widely used and have been a major driver in the mobile device revolution. 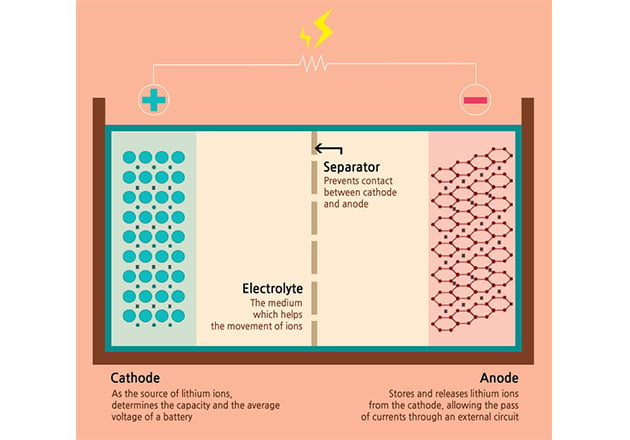 Figure 1 shows the four components of a conventional Lithium (Li) ion battery. The battery comprises an anode (the negative terminal of a charged battery) and a cathode (the positive terminal), set apart by a separator and an electrolyte. In the operation of a Li-ion battery, Li+ ions flow from the anode to the cathode, through the separator, which is porous. A corresponding electron current flows through the electrical load from the anode to the cathode. Lithium is chosen because it is the lightest and most electropositive element in the Periodic Table.

TechInsights is presently completing a detailed structural and materials analysis of the Samsung SDI battery found inside the Samsung SM-G977U Galaxy S10 5G smartphone. Figure 2 shows the inside of the phone, with the backside casing removed. The Samsung SDI EBBG977ABU Li-ion battery can be seen in this photograph. According to the package markings, the EB-BG977ABU is a 3.85 V, 4400 mAh Li-ion battery. It comes in a pouch cell package and is formed as a flattened "jelly roll" type Li-ion battery. 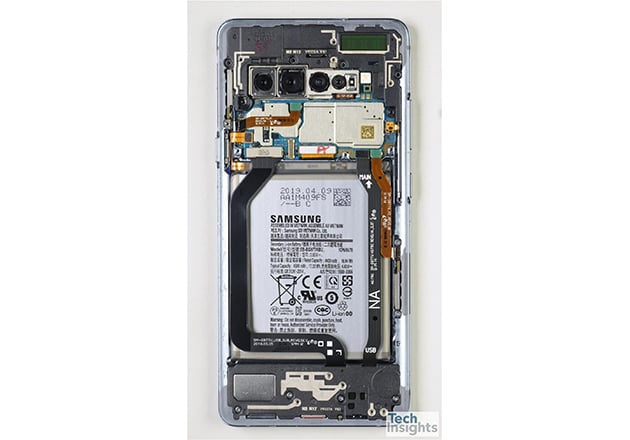 The EB-BG977ABU Li-ion battery was subjected to cross-sectional analysis in TechInsights’ Labs. Figure 3 presents a view of the cross-sectional structure at the right side of the battery. The battery is enclosed in a cladding layer that is sealed using organic polymer materials around the edge. The anode, separator, and cathode stack wraps in a clockwise direction, as a pre-formed stack of anode separator-cathode-separator materials. The start of the copper anode electrode is seen near the center of the image, while the end of the anode is seen near the upper right corner of the image. The active cell structure commences shortly after the second turn at the left end of the package. There is a total of 9 turns of the anode-separator cathode-separator materials, resulting in 17 active cell layers on the bottom side of the battery and 19 active cell layers on the top side. 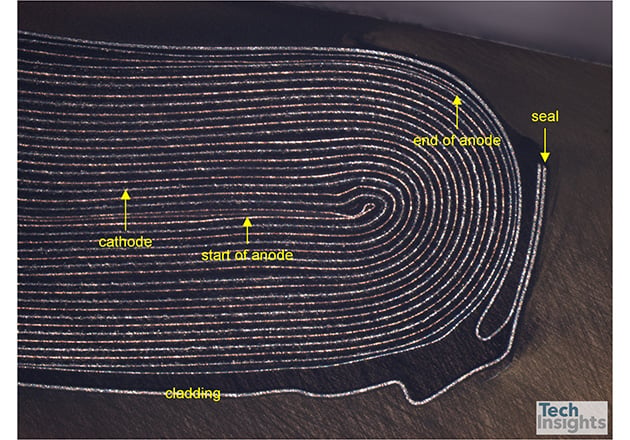 Figure 4 shows an optical image of the active cell structure in cross-section, in the middle of the battery, after delineation. The active cell is comprised of a copper anode, graphite-based anode active material, an organic separator, a cobalt oxide-based cathode active layer and an aluminum cathode. The cells are stacked such that each anode and each cathode film has active material on both sides, thus maximizing the use of anode and cathode surface area. 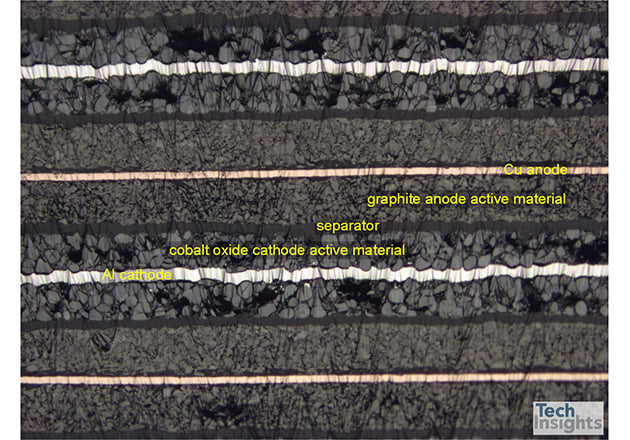 An SEM micrograph of the cell structure, following delineation, is presented in Figure 5. The battery materials were analyzed by SEM-based energy dispersive spectroscopy (EDS). The anode and cathode are formed with copper and aluminum metal, respectively. The anode active material is graphite, but both phosphorous and fluorine were also detected and are likely residues from the lithium hexafluorophosphate (LiPF6) salt that is likely used in the battery electrolyte.

The Li would not be detectable with SEM-EDS. A material containing carbon, cobalt, and phosphorus is detectable in the anode active material adjacent to the copper anode metal. The separator is formed with an organic polymer material that is coated on both sides with an aluminum oxide-based ceramic material. The cathode active layer is formed with cobalt oxide particles. Residual electrolyte materials, containing carbon, phosphorus, and fluorine, were also detected between the cobalt oxide particles. 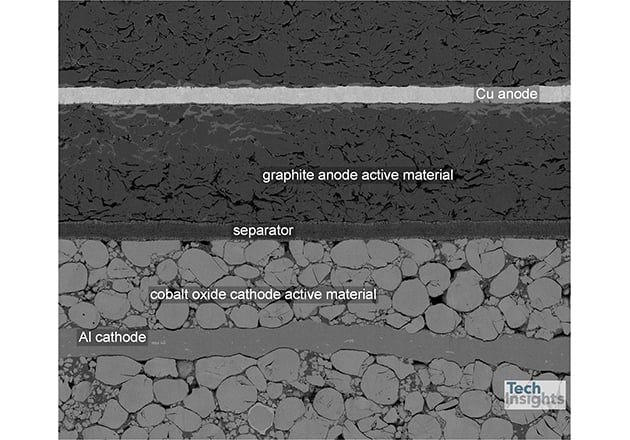 Li-ion batteries have proved to be a transformational technology. It is likely that without the invention of Li-ion batteries the mobile device revolution, which has changed our world so dramatically, would not have occurred. Furthermore, the potential electric vehicle revolution would be less likely to succeed. The essential structure of Li-ion batteries is the same as that described by Alessandro Volta, who invented the first battery as stacks of copper (cathode) and zinc (anode) disks separated by cloth (separator) soaked in salty water in 1800.

The materials science of the Li-ion batteries has continued to evolve, with new materials being used for the components, namely for the anode, the cathode, and the separator. The Li-ion battery will continue to be an area of innovation for many years to come, due to the economic importance of this technology.

Sinjin Dixon-Warren received his Ph.D. in chemical physics from the University to Toronto and a BSc in chemistry from Simon Fraser University. He is a process analysis engineer at TechInsights.

His professional interests are in the analysis of materials, surfaces, interfaces, and devices, in particular semiconductors, MEMS devices, and optoelectronic devices. Dixon-Warren has more than ten years of experience analyzing technology and patents in the semiconductor area.