Through bidirectional (vehicle-to-grid) charging, electric vehicles could serve as an emergency response force when power outages or grid shutdowns occur, enabling utilities to keep the lights on.

Old scenario: “Uh-oh, the power just went out! How long do we have to wait this time?”

That new situation could be far more common once bidirectional, or vehicle-to-grid (V2G), technology gains widespread acceptance. With V2G, electric vehicles (EVs) are not just a novel idea, they become power grid rescuers, an integral element in the nation’s energy infrastructure. An electric vehicle parked and fully charged in a garage (which they are 95 percent of the time) can supply excess battery power should a surge in grid demand from too-hot or too-cold temperatures happen. A simple power outage caused by a lightning storm can literally go unnoticed with V2G-enabled EVs on the job. 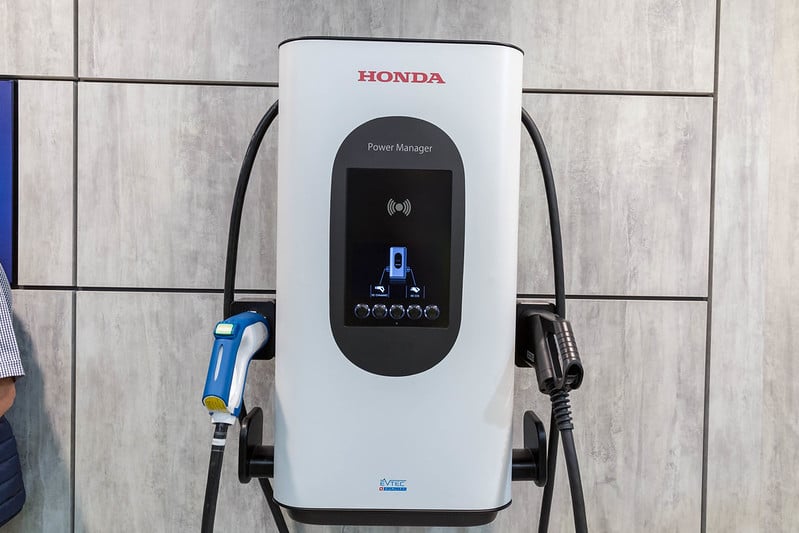 When an EV is initially charged, alternating current (AC) is converted into the direct current (DC) voltage the vehicle battery stores. With a bidirectional charger, the DC reverts to AC, which the grid can readily retrieve.

To balance grid loads, V2G-equipped EVs employ “valley filling,” or charging at night when demand is minimal, and “peak shaving,” which is transmitting power to the grid in high-demand circumstances. Peak load leveling maintains a stable voltage and frequency, and offers “spinning reserves” that handle abrupt demands for power. Add a smart meter to these services, and you have V2G.

In a marketing role reversal, V2G makes the utility-power-buying consumer the seller of “demand response services” back to the grid. Demand response services consist of either the delivery of stored electricity or a lowered charging rate (unidirectional V2G) to draw less energy from the grid. As a power provider, EV owners could find themselves benefiting financially.

Before coming fully onboard the “Bidirectional Express,” however, a reality check is in order. First, the technology is in its infancy, with only around 100 pilot tests globally and mostly in Europe. California’s pilot programs include one started in July 2022, with eight electric school buses in the San Diego Gas & Electric service territory taking part in a pioneering V2G project. Assisted by Nuvve software, batteries are pooled with others in a nearby school district to form a participating V2G resource under the Emergency Load Reduction Program, a  service of the California Public Utilities Commission (CPUC).

V2G can also sap the life of batteries since battery shelf life and charging cycles are limited. As technology adapts and improves, these issues likely will be confronted and overcome. Studies already suggest only a slight amount (a few percent) of battery degradation occurs using V2G, and one finding even claims the process could enhance battery life.

Though V2G expense is not exorbitant (a few hundred dollars minimum), bidirectional chargers frequently need specialized hardware. Vehicle producers and aftermarket suppliers anticipated this need and are rolling out solutions for the consumer. Ford’s electric F-150 truck can supply power to a home for as many as three days, Volkswagen’s newest vehicles embrace V2G, and Nissan just recently graced its electric Leaf with the technology. 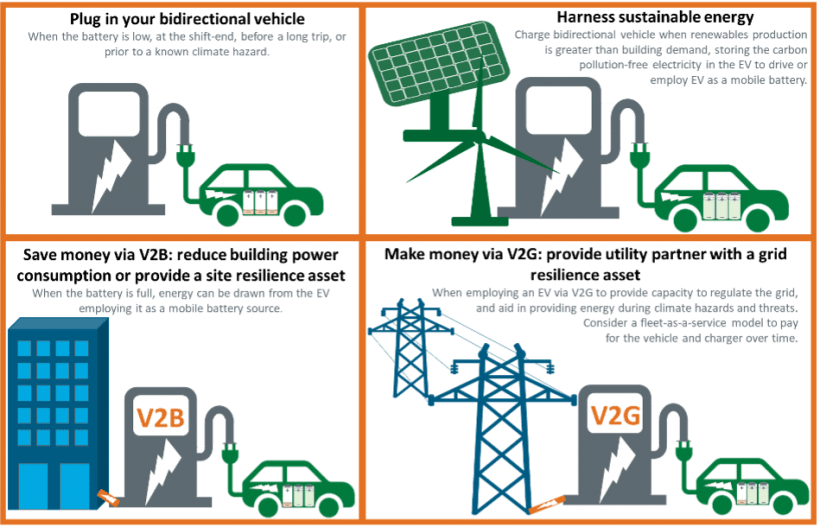 An illustration promotes the advantages of bidirectional technology. Image used courtesy of the U.S. Department of Energy

Public utilities have proven to be the leading catalyst for change to V2G, though. Time-of-use rates supply a money-saving incentive to EV owners to charge overnight when the power grid is less strained.

To provide commercial consumers an incentive to purchase electric vehicles, especially ones that can export power back to the grid, Pacific Gas and Electric Company (PG&E) recently was approved to begin the nation’s first V2G export compensation mechanism for EV customers.

Mostly pertaining to California, this new rate will be offered for charging equipment and stationary energy storage systems that offset the grid load during peak demand periods.

More than 420,000 EVs have been sold in PG&E’s service area alone, or one in six such vehicles sold nationwide. PG&E has consented to lock in this rate with the Vehicle-Grid Integration Council (VGIC), Electrify America LLC, and the Public Advocates Office at the CPUC.

Southern California Edison’s Katie Sloan, vice president of customer programs and services, compares the V2G process to the evolution of the solar industry. With that industry, it marked the first experience of switching from one-way power flow into dwellings toward having bidirectional flow.

As climate change casts a forbidding shadow, utilities and businesses are scrambling to devise fixes to revive—or even render obsolete—the nation’s doddering, damage-prone power grid. While far from a panacea, V2G at least provides a tourniquet to apply to a recurrent wound until more sophisticated technology enables a sustained recovery.