Rebuilding the nation’s electric power grid to move away from fossil fuels and into renewables like wind and solar will require new ways of thinking about power generation and energy storage. Energy storage can help the grid become more reliable by balancing energy output based on demand during the day and working with renewable sources to provide power to the grid at night or when the wind isn’t blowing. 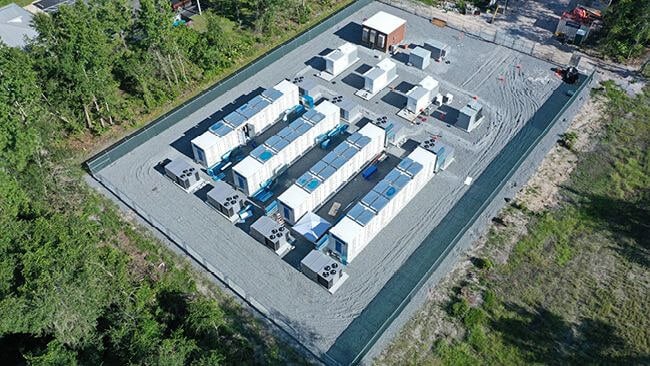 The 8.25-megawatt (MW) Micanopy battery site in Alachua County provides enhanced grid reliability for the surrounding area, about 15 miles southwest of Gainesville. The second site is near the Florida-Georgia border near Jennings, Florida, and has a 5.5 MW capacity to enhance grid reliability for Hamilton County.

Duke Energy Florida also announced it had completed three lithium-ion battery projects in Gilchrist, Gulf, and Highlands counties earlier this year. Duke Energy’s goal is to have six battery sites operating in Florida this year with a total capacity of 50 MW.

Beyond grid stabilization and reliability and support of renewable energy, battery systems can also be used as a source of emergency backup power when the grid goes down due to major storms and hurricanes.

Duke Energy is placing a 3.5 MW solar array plus battery storage at the John Hopkins Middle School in Pinellas County, Florida. The school serves as a hurricane evacuation center and will have a 1 MW solar array and 2.5 MW battery system to store and deploy renewable energy to the school, eliminating the need for noisy and polluting gasoline or diesel generators.

Another way to use energy storage to help the grid is through two-way (or bidirectional) charging from electric vehicles (EVs). Using vehicle-to-grid (V2G) technology is under study to allow the storage capacity of EVs to help support the grid during peak demand.

EVs can also be used by homeowners to provide electric power during grid outages. The new Ford F-150 Lightning, for example, has an optional package called the Intelligent Backup Power Home Integration System that works with the Ford Charge Station Pro to provide bidirectional power transfer between the F-150 truck’s battery system and the home electrical system. The F-150 truck must also have the extended range battery installed to take advantage of the home power option.

When attached to a house through the Ford Charge Station Pro charger, the F-150 Lightning can supply up to 9.6-kilowatts (kW) of electrical power—enough to run a refrigerator, air conditioner, or home appliances. Owners can power their entire home for up three days or, with careful energy management choices, as many as ten days during an extended power outage. When the truck’s battery reaches the one-third state-of-charge (SOC) level, the owner is notified through a cell phone app and can decide whether to continue using the truck to power the home. The truck will automatically disconnect when the SOC reaches a level that will still allow the F150 to reach the nearest available charging station.

To test out the V2G concept practically, Duke Energy is purchasing five Ford F-150 Lightning trucks with the highest capacity batteries. Using the trucks, the company will look at how well V2G operates in a real-world setting and determine how daily usage and power outages impacts the longevity of the truck’s batteries.