What is a Hysteresis Loop?

What is a Hysteresis Loop?

Hysteresis is a property of ferromagnetic materials in which a coil's magnetic induction lags the magnetic field that charges the coil.

Each and every molecule of a material is a magnet with a north and a south pole. All molecules must align themselves in the same direction to obtain the maximum flux density. Once all the molecules are aligned, flux density reaches a maximum value, causing the core to become saturated.

The time lag in magnetization of the core behind the value of H (magnetizing force) is caused by molecular agitation. That is, each molecule tends to align itself in the direction of the external field, and then, when the direction of current flow through the coil is reversed, it must align itself in the opposite direction. If the polarity of H is reversed slowly, very little energy is used. If the polarity of H is reversed rapidly, considerable heat is generated by the molecules bumping into each other in the core, resulting in a high-energy loss known as hysteresis loss. The typical hysteresis curve of a ferromagnetic material is shown in Figure 1. 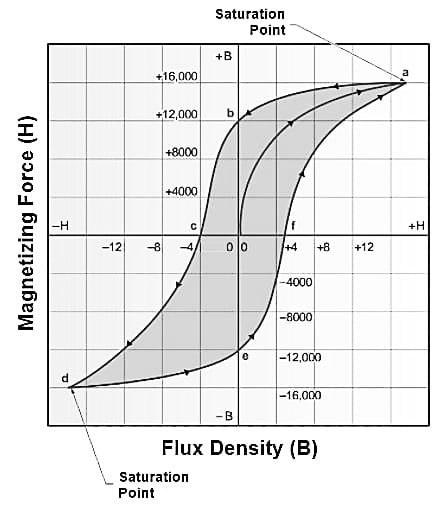 Retentivity is the ability of the core material to retain its magnetism after the magnetizing force is removed. Retentivity is most prominent in hard steel and least prominent in soft iron. The value of the residual magnetism when magnetizing force is reduced to 0 depends on the type of core material. Core materials with the greatest retentivity, and therefore the greatest area enclosed by the hysteresis curve, have the greatest energy loss. Materials that have greater hysteresis curve areas typically have greater magnetic retentivity. For example, annealed steel has about one-half the magnetic retentivity as that of hard steel (see Figure 2). 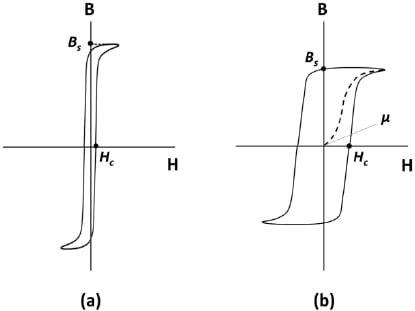 Figure 2. Annealed steel (b) has about one-half the magnetic retentivity as that of hard steel (a) 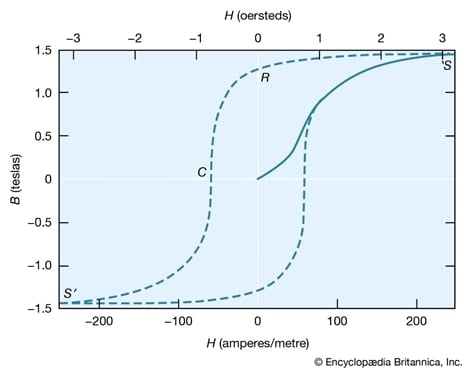 Because the materials are always saturated in a positive or a negative direction, they made excellent devices to store digital information in the 1950s and 1960s, although the memory density was small compared to that of modern technology.

In addition to applications in solenoids, relays, and clutches, electromagnets are used to lift heavy masses of magnetic materials. While permanent magnets have a magnetically retentive (hard) coil material, electromagnets have a non-magnetically retentive (soft) coil material that exhibits magnetic properties only when current flows through the coil. By controlling current flow with a DC power source and a switch, electromagnets can be turned ON and OFF and used to move heavy magnetic materials, such as steel, from one location to another.

Permeance is the property of a core material that allows the passage of magnetic lines of force. Permeance is compared with conductance in an electrical circuit and is the reciprocal of reluctance. Permeance is calculated by applying the following formula:

Pm = material permanence. The SI unit of magnetic permeance is the henry (H), that is webers per ampere-turn.

Example: What is the Permeance of a material with a reluctance of 1.75 × 106 ampere-turns per weber?