What Your Medical Device Battery Vendor Is Not Telling You

What Your Medical Device Battery Vendor Is Not Telling You

The growth of the internet of medical things is one of many trends driving and being driven by the proliferation of small, inexpensive batteries and cells.

Most batteries or cells include a data sheet with a few graphs depicting the product's performance. Here is an example of the type of chart that a data sheet might include. Note that this chart is for illustrative purposes only and is not intended to depict any real battery. 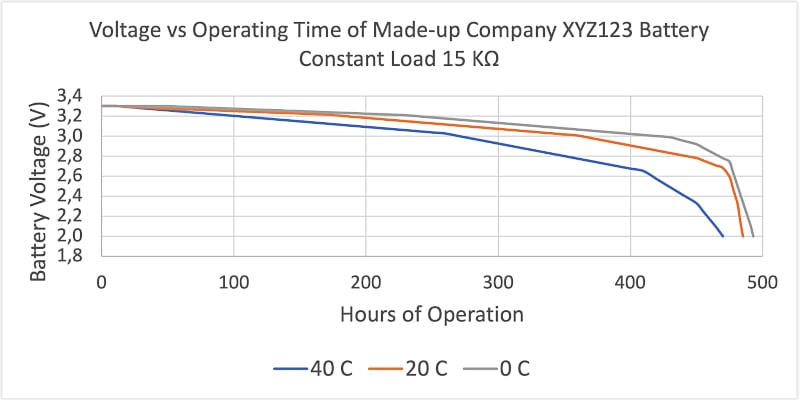 Figure 1. Sample chart of information that might be included in a battery or cell data sheet (does not represent any real product). Image used courtesy of Bodo’s Power Systems [PDF]

This data clearly shows that the battery lasts between 450 and 500 hours at the three tested temperatures. Assuming that your device is operated between 15 and 25 degrees Celsius, can you conservatively specify the lifetime of your device as 400 hours? The answer is no, you cannot rely on this value. The runtime of your device may be much shorter or much longer than the values shown, and to ensure the efficacy of your device and reduce risk to patients, you must take several factors into account.

Derating Due to Transportation and Storage

The minute a battery is removed from its charging station, it begins to lose capacity due to self-discharge. This is usually relatively small, and most manufacturers will specify an average charge loss during storage as a percentage of battery capacity per year. Often these numbers are small, around 2% lost per year, but it is important to recognize that there are usually temperature and humidity conditions associated with this number, and this number is only an average. It would not be impossible for an individual cell or battery to lose much more capacity during storage if the battery is near the tail of the manufacturing distribution or if the environmental conditions in which the battery is stored are less than ideal.

The Actual Current Consumption Profile of Your Device

The estimated battery life in a datasheet is usually based on some sort of standard current or load. Other than a simple pen flashlight, most medical devices do not behave as constant loads and will consume charge at widely varying rates. For example, a connected medical device may spend most of its time in a low-current (microamps) sleep mode, and then wake up once every minute to take a quick, 30-ms measurement (milliamps) before returning to sleep. Perhaps the device transmits data wirelessly to a central device or access point in an operation that consumes 10 mA over 50 or 100 milliseconds once every 30 minutes. Some devices may spend charge to flash an LED, run an encryption processor, or send a signal to turn on an actuator. It is obviously impossible for a battery vendor to know the current profile of every device. You must measure your actual device to determine how it consumes charge. Your device may spend enough time in low-power sleep modes that its expected life far exceeds the value shown on the datasheet. 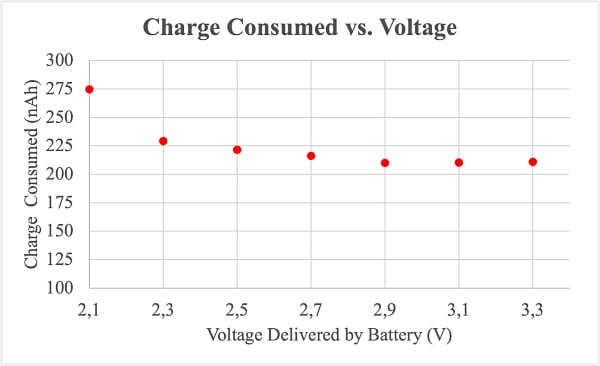 A connected medical device may continue to operate with efficacy as the voltage delivered by the primary cell or battery declines, but you cannot assume that the charge consumption remains constant. In some cases, a subsystem or component that requires a fixed amount of power may draw more current to compensate for the declining voltage. In other cases, a subsystem or component may be operating near the low end of its power range and may have to go through a retry loop once or more to succeed in performing its function. It would be unreasonable to expect the battery or cell vendor to know exactly how every medical device is going to consume charge as the voltage declines over time. To ensure efficacy and reduce patient risk, it is prudent to use a source-measure unit to measure charge consumption for several operational cycles at various levels of battery depletion so that you are not surprised by field failures, short battery life, and related issues reported in post-market surveillance.

Test Your Own Devices

Most battery and cell vendors provide accurate information that is helpful in explaining how a battery or cell will behave under various loads and environmental conditions. However, this information does not account for the distribution of performance or the fact that the current levels in a connected medical device can vary by several orders of magnitude. To reduce risk to patients and ensure the efficacy and safety of connected medical devices, engineers should test their devices and monitor their current profile at different voltages to know how their devices will behave as the battery moves toward depletion.