Understanding the Difference Between Distributed and Centralized Generation

Understanding the Difference Between Distributed and Centralized Generation

What is Distributed Generation?

The growth of renewable energy sources (RES) has a relevant impact also on the power system, due to the appearance of new power generators in several points of the grid, where traditionally only “passive” users were located (so called “loads”). The presence of these generators (mainly wind and solar) and the big number of them, raised important challenges for the grid operators, because the power which usually flows from centralized big generation power plants to the final users, through the transmission and distribution power system, now can change “direction”.

Before giving more details about this phenomenon, a brief introduction on the power system architecture is needed.

Traditionally, the Power system is divided into four levels:

The classic paradigm is to have users who only consume energy is broken, the users can be also producers and if their number and power is big enough, the generated power can now go upstream the network from Distribution system up to Transmission system changing completely the “classic” power flow. 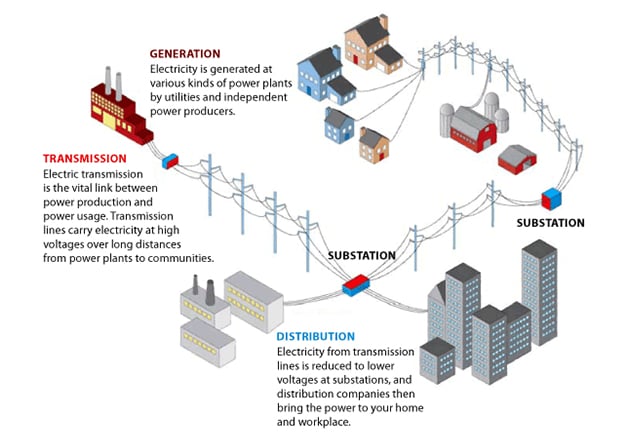 Distributed generation consists in small-medium power plants (typically renewable sources, mainly wind and PV) spread in a random way, that corresponds to the small rooftop PV built on a civil house to a power plant of hundreds kW or a few MW built for a factory or industry consortium for own consumption or just built by small private owner to sell energy in the market.

The energy generated by these plants is usually consumed locally, by the user himself for own consumption or by the others' close users, as the power always follows the shortest path with lowest impedance. The higher the difference between the power generated and the power absorbed by the users, higher will be the power going upstream the network, reaching other users farther or even the transmission network system.

This situation can create difficulties for the grid operator, mainly due to the electrical protection settings, voltage control and the possibility to have portions of the network working in “island” conditions.

All these challenges already have several solutions identified but definitely, they changed the classic ways for the grid control.

The distributed generation also brings advantages to the grid, for example, the possibility to have portions of the network working in “island” condition can be also an advantage in particular conditions because it could allow to keep the power on in a portion of grids, even when a major fault occurs, and so reduce the number of users affected by the power-off associated to that fault. Obviously, it would require a high level for monitoring and controlling all the grid portions, in order to keep all the network parameters within the predefined values.

One more main advantage is surely related to the power loss reduction on the electrical lines. Indeed having the power generation source closer to the final users, allows to reduce the power traveling on the electrical line and it results in loss reduction. Finally, the distributed generators can compensate locally the power missing from a fault that happened to a single generator, reducing the numbers of users that could be affected by that failure.

What is Centralized Generation

The centralized generation is the classic standard power management model for the very big power plants connected to the power system.

Historically these plants are the thermoelectric ones (coal, gas, nuclear and so on), but also hydroelectric, which can provide power continuously for 24h and they are located in specific points directly connected to the transmission power system.

Nowadays, with the carbon-free strategies of several countries and the abandoning of nuclear power, the old centralized generation is going to be replaced with renewable energy sources. New big mainly solar, wind and hydroelectric plants have been constructed along the last years and more will be realized in the next few years.

The new centralized generation, considering renewable power plants, brings also some additional challenges for the grid operators. Indeed these plants are located in specific geographical places where the primary resource is enough to justify the investment, so the PV plants will be realized in the area where the solar irradiation is high, as well as the wind farms will be built in windy places with specific requirements to obtain the maximum production as possible.

Not always, but often happens that the places where these plants are located are basically far from the main infrastructures and this situation requires obviously strong grid investments in order to guarantee the grid connection to these plants. This represents a cost increase for the investment itself and obviously not always possible, depending on the grid capability.

The centralized generation has also lower flexibility to failures, than the distributed one. As if a relevant fault occurs in the plant, a big portion of the generation power could be turned off, with relevant impacts in the dispatching and with possible power interruptions for several final users.

An Overview of Distributed Vs. Centralized Generation