This article offers a method on how a buck-mode DC-to-DC converter IC can be made into a boost-mode device to drive LED strings with higher voltage.

With a few extra components and some rearrangement of the topology, a buck-mode DC-DC converter IC can be made into a boost-mode device, to drive LED strings with voltages higher than the supply voltage.

While there are many boost regulators available, this topology allows a single buck regulator IC to provide both buck and boost functions, and so may simplify the bill of materials (BOM) and reduce overall cost. Although using the buck device for boost operation may result in increased variation in the LED current beyond what is acceptable, an additional control loop can be added to further regulate the current, if needed.

This transformation example uses the MAX16822/32 hysteretic buck converters from Maxim Integrated, which are 2-MHz high-brightness LED-driver ICs with integrated MOSFET and high-side current sense, Figure 1. (The MAX16822 and MAX16832 differ only in current rating: 500mA versus 1A, respectively.) 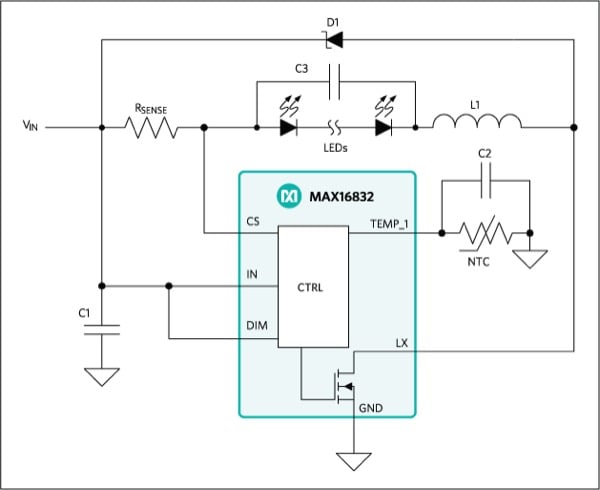 Figure 1: Typical application circuit of the MAX16832 as a buck converter LED driver

Adding the hysteresis results in a self-oscillating system which generates a sawtooth-shaped LED current, Figure 2. The amplitude of the sawtooth is determined by the amount of hysteresis. Capacitor C3 acts as a filter, so that the LEDs will mainly see a DC current. This topology is a known as a high-side buck topology. 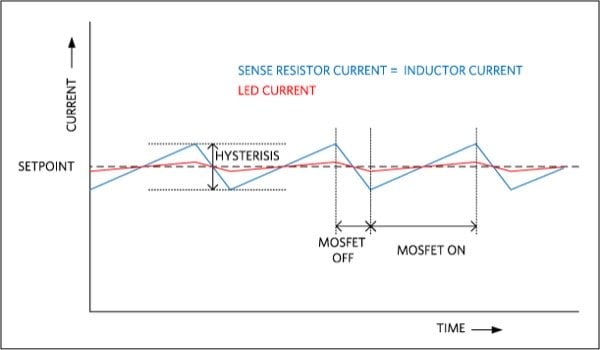 Figure 2: The current waveform of the hysteretic buck LED driver has a sawtooth LED current due to self-induced oscillation.

Going from buck to boost

The result of this arrangement is that the LED current will depend not only on the regulated input current (IIN), but also on input voltage (VIN), output voltage (VLED), and the efficiency (η) of the converter: 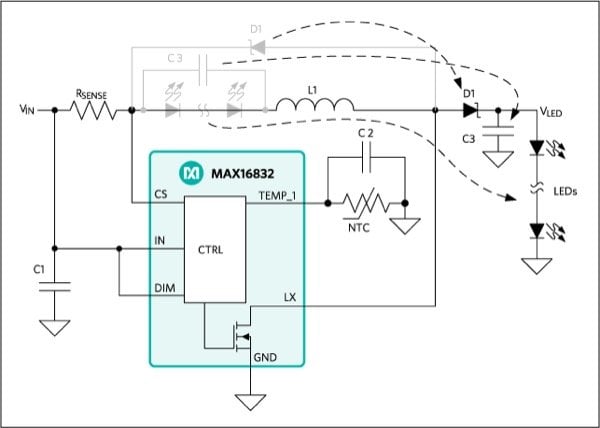 Figure 3: Change topology from high-side buck to boost just requires some rearrangement of the external components. 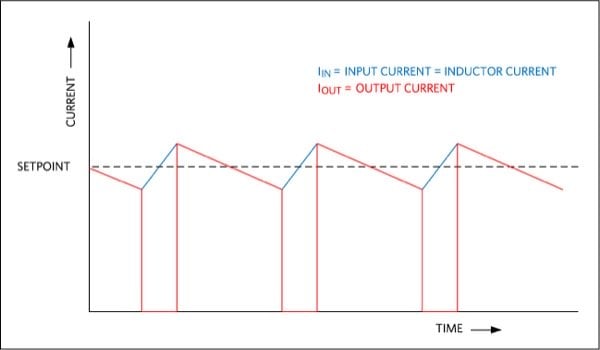 Figure 4: When configured as a hysteretic boost LED driver, the input current is regulated rather than the LED current, as shown by the waveforms for the input and output currents.

If the resulting variation in the LED current is greater than acceptable, an extra circuit based on the MAX8515 (a wide-Input, 0.6V shunt regulator for isolated DC-to-DC converters) can be added to regulate the LED current, Figure 5.

Figure 5: An additional circuit based on the MAX8515 shunt regulator can be used to improve LED current regulation, if needed.

The MAX8515 acts as an error amplifier and compares feedback voltage VFB to an internal reference voltage of 0.6V. VFB is directly proportional to the LED current, with VFB = R2 × ILED. Since the output of the amplifier can sink current from the TEMP_I pin but cannot source current, a small constant current is sourced by the TEMP_I pin itself. The difference between both currents is integrated by capacitor C2. If the MAX8515 sinks more current than the TEMP_I pin sources, the voltage decreases; the reverse is true as well. The setpoint for the input current IIN is proportional to this voltage, Figure 6. Therefore, if VFB is smaller than the 0.6V reference, no current will be sunk and the voltage on TEMP_I increases. This, in turn, will increase the input power, and therefore the LED current and VFB. If VFB is greater than the reference, the voltage on TEMP_I will be pulled lower in order to reduce the LED current. 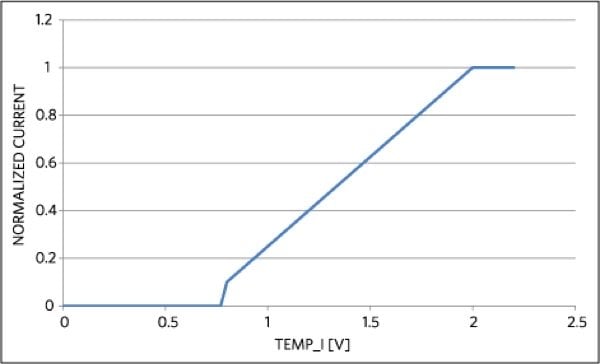 Figure 6: The MAX8515 manages the sinking and sourcing, as seen in the relation between voltage on TEMP_I and input-current set point.

These parameters apply to the control loop used to regulate the LED current, Figure 7:

To correctly configure the boost circuit, sense resistor RSENSE should be chosen so that the maximum input current is slightly higher than needed. The extra control loop then reduces the input current to get the correct LED-current value. The value of this resistor can be calculated as follows:

The additional sense resistor R2 can be calculated by:

To protect the circuit from such a condition, a few extra components can be added to the basic circuit, Figure 8. If the gate voltage of Q2 reaches its turn-on threshold, Q2 pulls down the DIM pin on the converter. This automatically stops the converter from switching and the output voltage slowly drops until Q2 is turned off. The cycle repeats so that the output voltage varies around the overvoltage threshold, which is chosen to be within the operating range of the converter.

Figure 8: Over-voltage protection is needed when an LED fails open circuit, thus allowing C3 to become charged beyond the maximum rating of the IC

To verify the buck/boost analysis and assess overall performance, two circuits were built and tested, one with the extra LED current regulation (circuit 2) and one without it (circuit 1). The circuits were designed to drive eight LEDs (≈24V) at 200mA from a 12V input. The efficiency was estimated to be around 95%.

For regulation of the LED current, R2 needs to be 3Ω (600mV/200mA). To extend the input voltage down to 8V, RSENSE should meet the following condition: 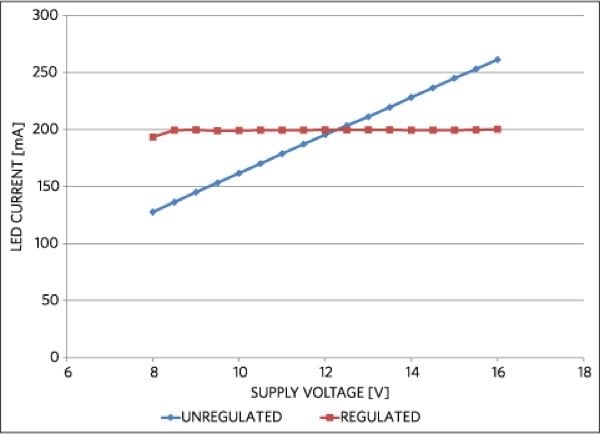 Figure 9: LED current versus input voltage with (red) and without (blue) additional regulation shows the output current’s sensitivity to the value the input voltage.

In comparison, the circuit with LED current regulation does not show this effect but has a constant value over the entire input voltage range. The extra control loop clearly shows its value by regulating the LED current to the target value for the entire input-voltage range; it is slightly lower only with 8-V input. Most likely, the efficiency was slightly lower than the estimated 95% due to losses in R2. A quick measurement showed that the input current was at the maximum for VIN = 8V. A simple fix would be to lower RSENSE to 270mΩ. 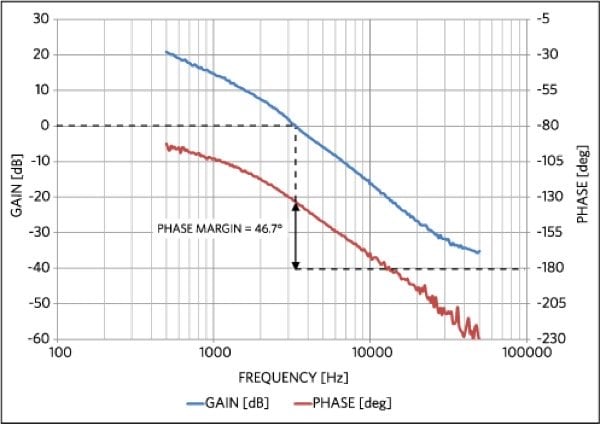 Figure 10: The Bode plot of the LED driver circuit with the current regulation confirms the circuit has sufficient phase margin to guarantee stable operation.

Another nice feature of the hysteretic-buck LED driver is that the control loop is inherently stable, since there is no feedback. Adding the additional control loop introduces feedback, which could introduce instabilities. A Bode plot of the stability of the control loop revealed that the circuit has a phase margin of about 47°, which is sufficient to guarantee stable operation, Figure 10.

Fons Janssen is a Principal Member of Technical Staff for Maxim Integrated. Prior to joining the company in 2003, he worked at ThreeFive Photonics developing integrated optical circuits, and before that at Lucent Technologies, where he worked on optical-access networks. He graduated from Eindhoven University of Technology (The Netherlands) with an Electrical Engineering degree. Postgraduate studies at this university led to a Master’s degree in Technological Design.