Innovative solutions aimed to improve efficiency without upping costs are sure to interest users, particularly in a very competitive business environment. This article presents the benefits of efficiency-enhancing tandem diodes in an NPC topology for solar inverters.

The adoption of new technologies such as SiC and the implementation of 1500 VDC systems has enabled higher power densities in the PV inverter market. A light, compact wall-mounted device can now cover power ranges it once took an entire cabinet full of components to muster. This is why multi-string inverters are a rising force in the utility-scale market.

On the downside, the price per-kW of these new devices is still higher than that of central inverters. One of the reasons is the strong demand of power electronics. That has brought the supply of some key components to its limits, keeping the price level of new technolo-gies such as SiC at a higher level than initially expected. This leaves the door open for creative solutions that make the most of well-established and cost-efficient Si technologies.

NPC topology with a tandem diode for 1500 VDC systems

Neutral point clamped (NPC) topology is one of the preferred choices for 1500 VDC systems. The possibility of using fast 1200 V Si components that work in the 10-to-20 kHz frequency range offers clear advantages compared to the alternative three-level Mixed NPC (MNPC) topology. MNPC would require 1700 V components, but these are unsuitable for the targeted switching speeds.

The first option for improving the NPC topology’s efficiency would be to replace key Si components with more efficient SiC chip technology. This upgrade comes at a higher cost. Increasing the switching frequency to accommodate smaller and generally cheaper passive components could offset some, but not all, of this added cost. In most cases, the more expensive semiconductors will raise the per-kW price.

A second option for boosting efficiency would be to use more complex topologies such as Advanced NPC (ANPC) or multiple levels in combination with SiC components. This requires more gate drivers and power supplies, which would complicate the design effort and increase costs.

So how does one enhance efficiency at an acceptable cost? A viable solution is to go with a tandem diode configuration – that is, to replace the relatively slow 1200 V diodes with two much faster 650 V diodes connected in series. While there will be a slight increase in the forward voltage of the diodes, the superior dynamic characteristics of 650 V diodes provide an advantage in terms of total losses even at low switching frequencies. In solar applications, for which the most relevant efficiency point is for cos(Φ) close to 1, only the buck diodes of the NPC need to be replaced with tandem diodes as pictured in figure 1. 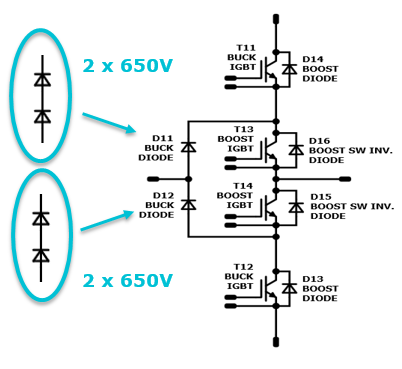 Figure 2: Loss breakdown and comparison of an NPC module with different buck diodes.Conditions: P = 120 kW / cosΦ = 1 / VIN = 1300 V / VOUT = 400 V / IRMS = 100 A It shows that when using 1200 V fast Si diodes, nearly 30% of total losses are directly related to their switching performance. Moreover, these diodes also influence the dynamic behavior of the outer IGBTs, as they are partly responsible for the EON losses.

This reduces efficiency and increases the junction temperature in the affected components, shortening their service life and precluding higher switching frequencies. Replacing these diodes with 1200 V SiC diodes, a so called hybrid module, would reduce total losses by as much as 40% with an extraordinary drop of 95% in the diode’s switching losses. The far lower EON also results in a 30% reduction in the buck IGBT’s switching losses. However, as figure 3 shows, this improvement has a considerable impact on the module’s cost, which is then twice as high as the price of a full Si module

Replacing the 1200 V Si buck diodes with tandem diodes would increase static losses by just 5%. On the other hand, the reduction in the diodes’ and IGBTs’ switching losses –80% and 21%, respectively – would more than compensate for this slight uptick in static losses, resulting in an overall decrease of 25% in losses. As figure 3 illustrates, the difference in cost between this proposed solution and a standard NPC module is all but negligible. And that makes tandem diodes a very attractive way of improving the NPC module.

Another advantage of the tandem diode configuration’s lower losses is that the switching frequency can be increased. For example, an NPC module featuring tandem diodes switched at 20 kHz will achieve the same efficiency as an NPC module with fast 1200 V diodes at 8 kHz. This would enable engineers to use smaller passive components and build much lighter and more compact devices.

In a very competitive and supply-driven market, the NPC topology with tandem diodes provides a reliable, cost-efficient solution for multi-string solar inverters. With efficiency approaching that of a hybrid SiC module and the price tag of a full Si device, it not only enables inverter manufacturers to build lighter and more compact devices; it also maximizes the ROI for these vendors and their customers.

Guillem Gargallo holds an Engineers degree in Energy Management and Systems Technology at the Polytechnic University of Valencia and an MBA at Distance Learning Institute, Beuth University of Applied Sciences Berlin. He works as the Product Marketing Manager at Vincotech with a strong technical background in the implementation of semiconductor modules for industrial applications.