This article demonstrate the next step in device evolution can be achieved by combining the ET-IGBT MOS cell and the BIGT integration structure.

High voltage IGBTs have undergone major breakthroughs in the past two decades with respect to their power handling capabilities. Nowadays the next step to enable higher output power capability for high voltage devices is following two different development paths. The first is an IGBT/Diode integration concept by combining both the IGBT and diode modes of operation in a single chip and hence eliminating the need for a separate antiparallel diode. This step was realized with the introduction of the high voltage and hard switched Reverse Conducting RC-IGBT (or the Bimode Insulated Gate Transistor or BIGT). The BIGT was based on the Enhanced Planar (EP) MOS cell platform, called SPT+. The second development path was achieved with the introduction of an Enhanced Trench (ET) MOS cell or TSPT+ to provide further plasma enhancement (i.e. losses reductions) combined with improved controllability.

Both the BIGT and ET-IGBT device concepts provided separately an additional increase in the output power compared to state of the art HiPak 2 modules with current ratings reaching up to approximately 1800A/3300V and 900A/6500V. The preferred choice of either approach depends heavily on the application in terms of topology, switching frequency, gate drive/control adaptations, and diode loading / surge current requirements. Figure (1) shows the nominal current carrying capability increase with each improved IGBT generation for the reference HiPak 2 modules rated at 3300V, 4500V and 6500V. 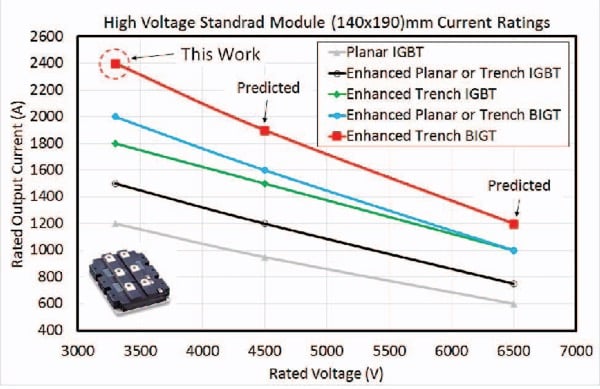 In this article, we demonstrate how the next step in device evolution for targeting even higher current ratings can be achieved by combining the ET-IGBT MOS cell and the BIGT integration structure. The reported results offer the possibility to reach another significant milestone where the current ratings can be doubled to 2400A/3300V and 1200A/6500V when compared to the first IGBT module products at these voltage ratings.

The high power performance and advantages of the BIGT concept based on the EP MOS cell technology have been previously reported for different voltage ratings ranging between 3300V and 6500V. Also recently, lower losses and higher current ratings were achieved with an IGBT, which is based on the ET MOS cell technology. Therefore, it is natural to follow on the next step and provide the combined advantages of both design concepts by introducing a BIGT based on the ET MOS cell design. The ET-BIGT structure shown in Figure (2) was designed by employing the previously reported BIGT backside architecture with respect to the p+ pilot IGBT region and the radial layout p+/n+ shorting design for providing a snap-back free on-state characteristics. 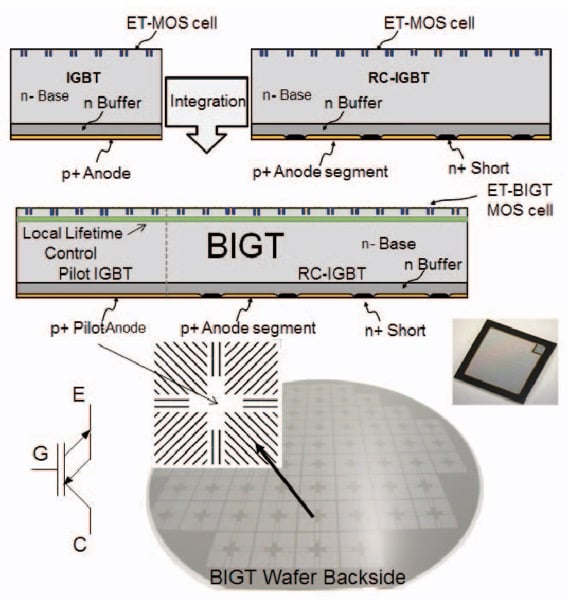 The main focus of the ET-BIGT was to optimize the ET MOS cell for providing good diode performance. For the targeted performance gain, it is critical that the diode mode on-state losses of the BIGT remain relatively low even under positive gate biasing conditions for ease of control and for maintaining good surge current capability. In principle, trench cell concepts in an RC-IGBT provide a stronger gate shorting effect since a planar cell design has a lateral gate and can still provide relatively high diode hole injection at the centre of the p-well under the contact. Hence, the introduction of a diode p-type anode pilot region in the third dimension is necessary to obtain low conduction losses even under positive gate biasing. Introducing the diode pilot region in this manner does not adversely affect the ET cell plasma enhancement for lower losses as far as the dimensions between the repetitive pilot diode regions are kept large.

For reducing the diode mode reverse recovery losses, the well-proven Local p-well Lifetime (LpL) control region in the emitter p-well is also included for lowering the injection efficiency in diode mode without adversely affecting the excess carriers in transistor mode for low conduction losses. Furthermore, a uniform local lifetime control layer is introduced across the whole device at a depth beyond the trench bottom regions as shown in Figure (2). The uniform local lifetime dose is varied to adjust the recovery losses to the desired target as discussed in the following section.

To assess the full impact of the lifetime control, static and dynamic electrical characterization was carried out on the new ET-BIGT chips and compared to reference devices including EP-IGBT, EP-BIGT and ET-IGBT having a similar active area of approximately 1 cm2. The different chip designs were dynamically tested under nominal current and voltage conditions at 150°C, RGon = RGoff = 33 ohm, Cge = 10nF and a stray inductance of 2400 nH. The losses technology curves in both transistor and diode modes are shown in Figures (4) and (5) respectively. Figure (4) shows that the ET-BIGT uniform lifetime control results in an increase in the Vce values. Figure (5) shows that ET-BIGT design (B) matches the diode losses of the EP-BIGT. 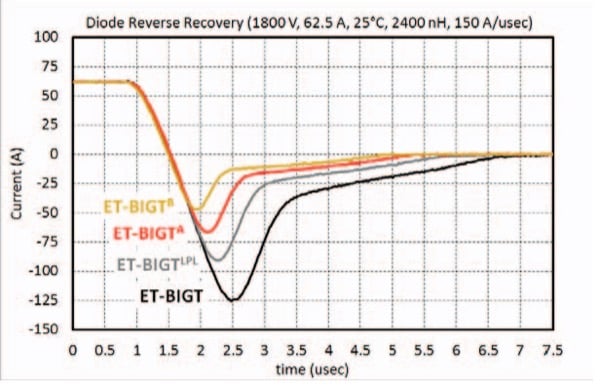 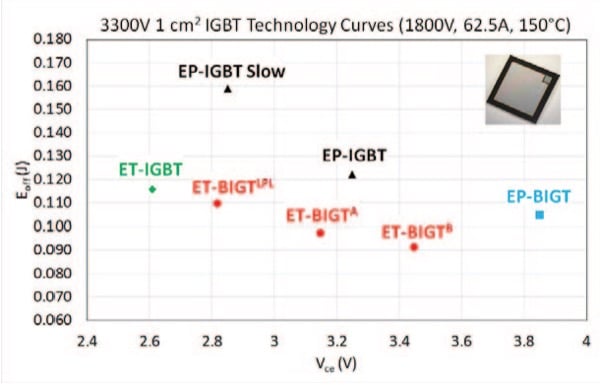 It is important to note that the uniform local lifetime dose of design (B) is close to half of that of the EP-BIGT due to the lower injection efficiency of the trench cell when compared to the planar cell. While the higher EP-BIGT conduction losses results in a chip current rating of approximately 50 A/cm2, the ET-BIGT can be rated at 62.5 A/cm2 (similar to EP-IGBT). This can then provide the increased module current ratings as discussed previously. 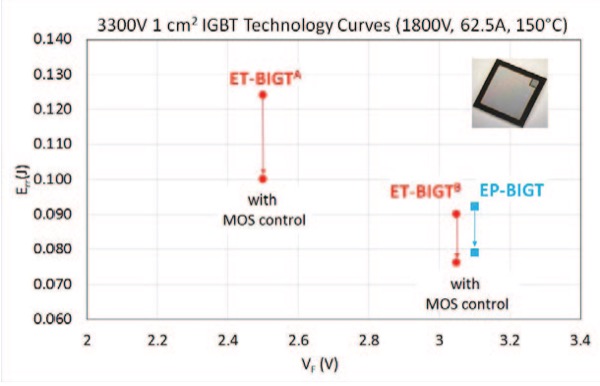 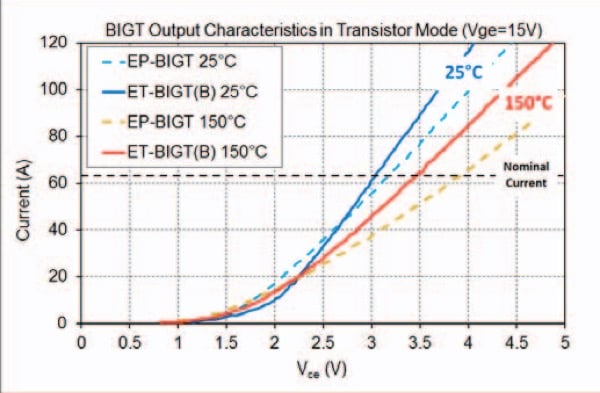 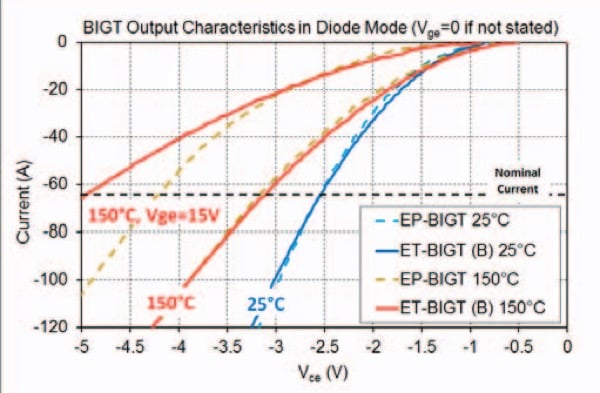 Figures (6) and (7) show the EP-BIGT and ET-BIGT design (B) static conduction curves in both IGBT and diode modes respectively. The diode mode on-state are recorded with an applied gate voltage of 0V and 15V. The impact of the trench cell is clearly visible having a higher VF with a positive gate emitter bias voltage. 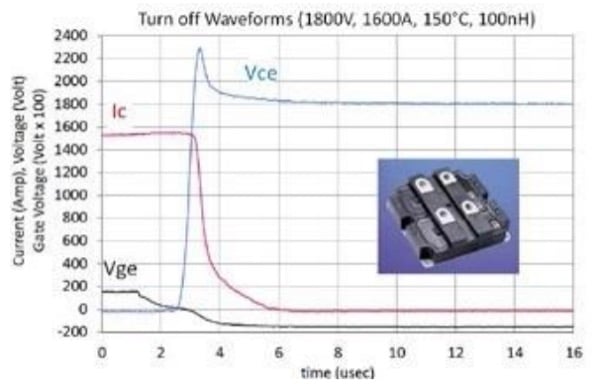 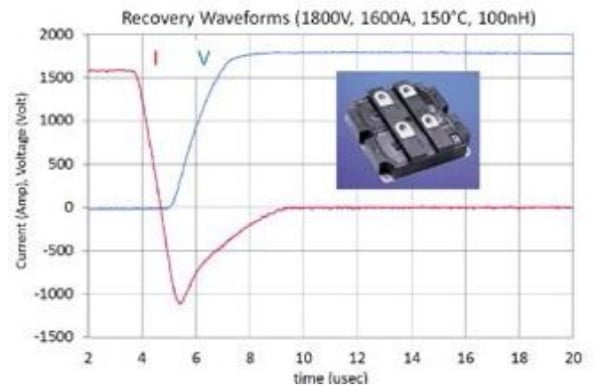 After nearly two decades of HV-IGBT developments, the ET-BIGT chip platform has the potential to enable a new milestone by reaching double the output current carrying capability of HV-IGBT modules when compared to first-generation devices.

Munaf Rahimo worked as the Corporate Executive Engineer at ABB Switzerland Ltd. He is specialized in the field of research and development, semiconductors, project management and product development. He earned his Master's Degree in Electrical and Electronic Engineering and Ph.D. in Power Semiconductors both at Staffordshire University located in Stoke-on-Trent, England. He also achieved his Masters of Business Administration (MBA) in International Business at SBS Swiss Business School at Kloten, Switzerland.

Chiara Corvasce works as the Head of Research and Development - Bipolar Discretes at ABB Switzerland Ltd. Her responsibility focuses on the technical and personnel leadership of the R&D Bipolar department. She is responsible for the technology roadmap implementation of the product development roadmap in the area of Bipolar Discretes; reliability measurement lab used for qualification of new products and product improvements; securing quality standards in the development processes and many more. She is particularly skilled in the field of semiconductors, simulations and manufacturing. She earned her Master's Degree in Physics at the University of Bari located in Bari, Italy. She also acquired her Ph.D. in Electrical and Electronics Engineering at the University of Zurich (ETH Zurich) at Zurich, Switzerland.

Maxi Andenna works as a Research and Development Engineer at ABB Switzerland. She is particularly skilled in materials science, research and development, as well as simulations. She is a graduate from the Technical University of Ilmenau and she earned her Ph.D. in Physics at the University of Neuchâtel, Switzerland.

Charalampos Papadopoulos is a Senior R&D Engineer and Project Leader at ABB Switzerland. He is responsible as the project leader for product, technology and process developments; development of IGBTs and Diodes from 1.2kV and 6.5kV; support of SiC activities; and development of new passivation concepts and processes. He earned his Engineer's Diploma in Electrical Engineering and Electronics and Communication Technology at the University of Stuttgart in Germany.

Arnost Kopta worked at ABB Switzerland as a Department Leader, where he was responsible for the technical and personnel leadership of the department and for the technology roadmap and implementation of it in the area of high voltage IGBT chips and modules. He is particularly skilled in the field of power semiconductors, power electronics and electronics packaging. He earned his Certificate of Advanced Studies in Corporate Finance at the University of Zurich in Germany. He also earned his Master's Degree in Engineering Physics at Lund University. He then finally acquired his Ph.D. at the University of Bremen in Bremen, Germany.