The Effects of PCB Design on Ignition IGBTs Thermal Performance

The Effects of PCB Design on Ignition IGBTs Thermal Performance

This article presented the impact of the use of different thermal PCB PADs on the thermal performance of Ignition IGBTs.

Climate change and environmental concerns are driving the technical demands and technology evolution in the transportation sector. Examples of this are the constant R&D on energy efficiency, vehicle electrification, and the use of alternative fuels.

Emission regulations aimed at the reduction of greenhouse gases and pollutants imposed by governments around the world are getting stricter [1]. New and demanding limits and conditions are forcing combustion engine manufacturers to create engines that are smaller in volume, work at higher RPMs and able to work with leaner fuel mixtures.

On the overall, these changes in the combustion engine will affect the operating conditions of Ignition IGBTs. Foreseeable, Ignition IGBTs used in these new designs will require higher clamping voltages and energy while being able to operate at higher frequencies. In this scenario, the thermal performance and the capability of the ignition system to effectively dissipate the generated heat will become more relevant.

In this article, the impact of the use of different thermal PCB PADs on the thermal performance of Ignition IGBTs will be presented. In particular, Littelfuse DPAK packaged Ignition IGBTs will be analyzed using different PCB PAD options considering multiple operating conditions. The provided results will show the reader the benefits of a well thought PCB PAD thermal design and its impact on the temperature evolution of the Ignition IGBTs.

With the increasing restrictions regarding CO2 emissions (fuel consumption) and pollutant emissions, the challenges for new Spark Ignition (SI) engines are critical. To face the new daring, SI engines are evolving following some strategies and technologies.

Between these trends, it is worth to mention the engine rightsizing and alternative combustion processes that will be mainly based on charge stratification, new fuels and dilution of the homogeneous mixture, either with fresh air or with Exhaust Gas Recirculation (EGR). To achieve the new requirements regarding the air management, changes in the gas exchange strategies are expected and some of them can also provide additional benefits on the fuel consumption thanks to the reduction of the pumping work, one of the main drawbacks of the SI engines in comparison with the more efficient Compression Ignition (CI) engines.

In order to arrange the new trends, three main strategies are now of great interest in the close future. On the one hand, the enlargement of the operation range of the engine due to the new test procedure requirements. On the other hand, the trend to dilute the mixture, aimed at reducing the engine fuel consumption and thus CO2 emissions. Finally, new requirements regarding CO2 reduction and public policies are forcing manufacturers to consider hybridization as mandatory in the next future.

Engine rightsizing and hybridization might require the use of smaller cylinders while maintaining the same throughput power. This will result in higher combustion cycle rates, which require that the ignition system works at higher switching frequencies leading to higher operating temperatures.

Diluted mixtures at low and mid load might require the use of wider gaps to ensure proper heat transfer when the combustion process is initiated. The use of wider gaps requires higher voltage ratings to initiate the arc in the spark gap and consequently, higher voltage ratings are required for the Ignition IGBT and the elements used in the ignition system.

Direct Injection During the Compression Stroke

Direct injection during the compression stroke avoids the mixture homogenization and forms a fuel-rich zone in the proximities of the spark while keeping the global poor mixture, achieving an additional efficiency improvement. The fuel spray must generate favorable conditions for the combustion development at the time and location of the spark.

However, the high local and temporal variation close to the spark compromise the ignition system, which ideally should cover a wide ignition space (larger electrodes gap) and longer ignition time. These conditions would require a higher breakdown voltage and energy release in the spark.

Ignition IGBTs Used in the Coming Generation of Ignition Systems

Overall, it is foreseeable that the Ignition IGBTs used in the coming generation of ignition systems will be required to sustain higher clamping voltages and energy (and consequently higher current), while operating at conditions that inevitably will increase their thermal dissipation. Under these conditions, the Collector to Emitter ON state voltage (Vce(ON)) parameter, which is directly correlated to the ON state losses, will gain higher importance as Ignition IGBTs with lower Vce(ON) will be required in order to reduce power losses and consequently, achieve lower junction temperatures, while maintaining a small system footprint.

In the coming section, a number of experimental test results will be shown in order to demonstrate the effect of a lower Vce(ON) on the steady-state temperature and to assess the impact on the thermal performance of DPAK packaged Ignition IGBTs when different thermal PCB PADs are used. A simplified scheme of the test bench setup is shown in Figure 1, where a load inductance of 0.3 mH was used in order to emulate a common value of the leakage inductance of commercially available Ignition coils.

The switching frequency is set to either 33 Hz, 50 Hz, 80 Hz, 100 Hz or 150 Hz. The dwell time or time that the Ignition IGBT is in the ON state is set to achieve 10 amps of peak current. The Device Under Test (DUT) is then placed in one of the different PCB PADs shown in Fig. 2 and left operating for 10 minutes, ensuring a steady-state temperature measurement.

Figure 1: Simplified schematic of the testing circuit and indicative waveforms of the gate voltage, collector current, and dissipated power.

These devices were chosen, as they possess similar electric and physical die characteristics and equivalent current and energy ratings. Fig. 3 summarizes the measured steady-state case temperatures achieved when working under 33 Hz and 150 Hz considering the different PCB PADs.

Figure 3: Effect of a lower Vce(ON) in the steady-state temperature.

The effect of the use of the different PCB PADs can be further analyzed in Fig. 4, where the steady-state case temperature for the NGD8201A is shown when different switching temperatures and PADs are considered.

For instance, notice how the steady-state temperature when working at 150 Hz is reduced from ~90 C to ~70 C when the minimum PAD with heat spreaders between top and bottom layer (PAD 2) or a PAD with the recommended area (twice the area of a DPAK, PAD 3) are used. 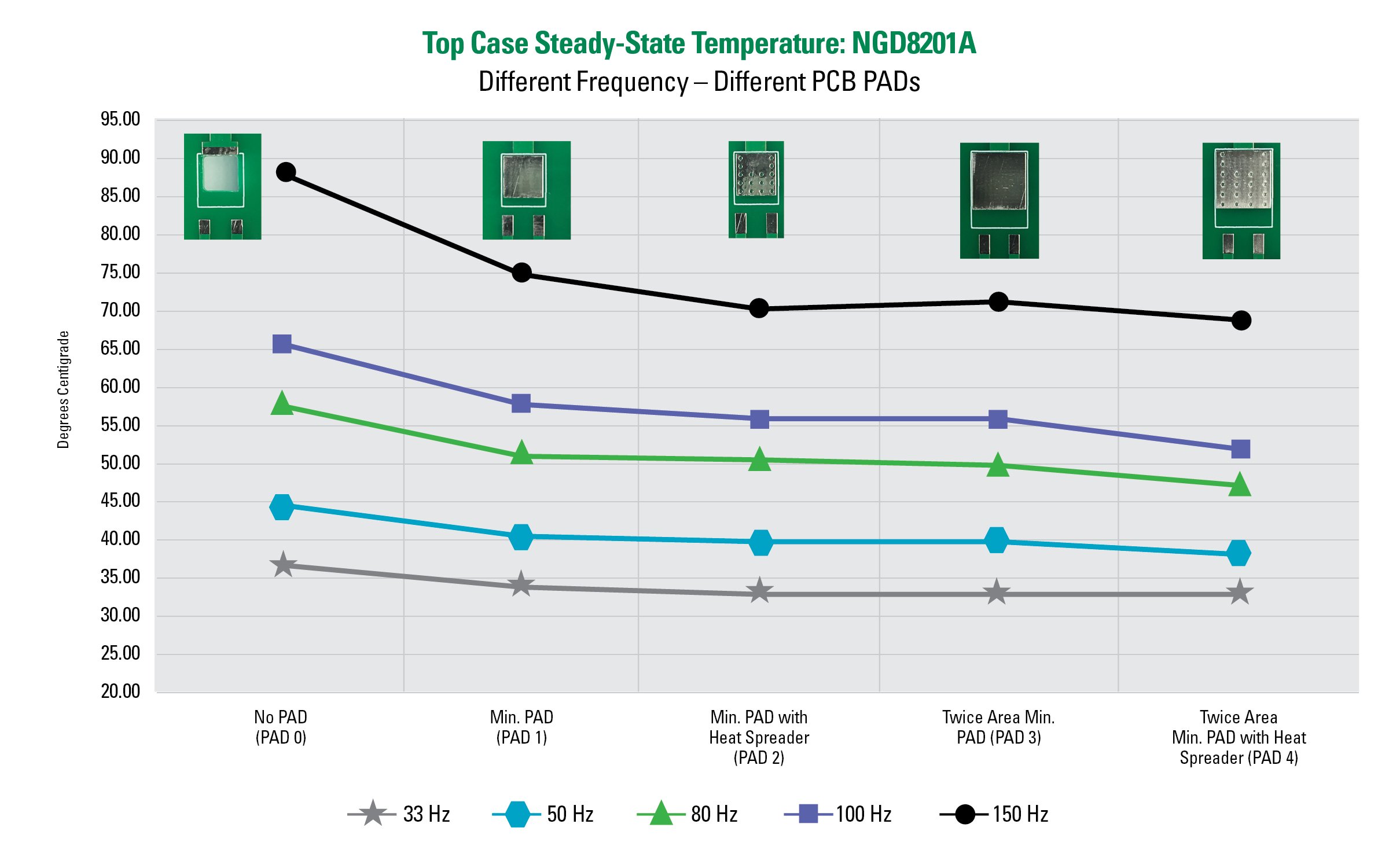 For a better comparison, the obtained steady-state case temperature under different frequencies is plotted when using the minimum PAD with heat spreaders between the top and bottom of the PCB (PAD 2) and the recommended PAD of twice the area of a DPAK (PAD 3). It is shown that regardless of the switching condition, these two PADs can offer the same averaged thermal dissipation capability. This is of special importance in Ignition platforms in which size needs to be considered. 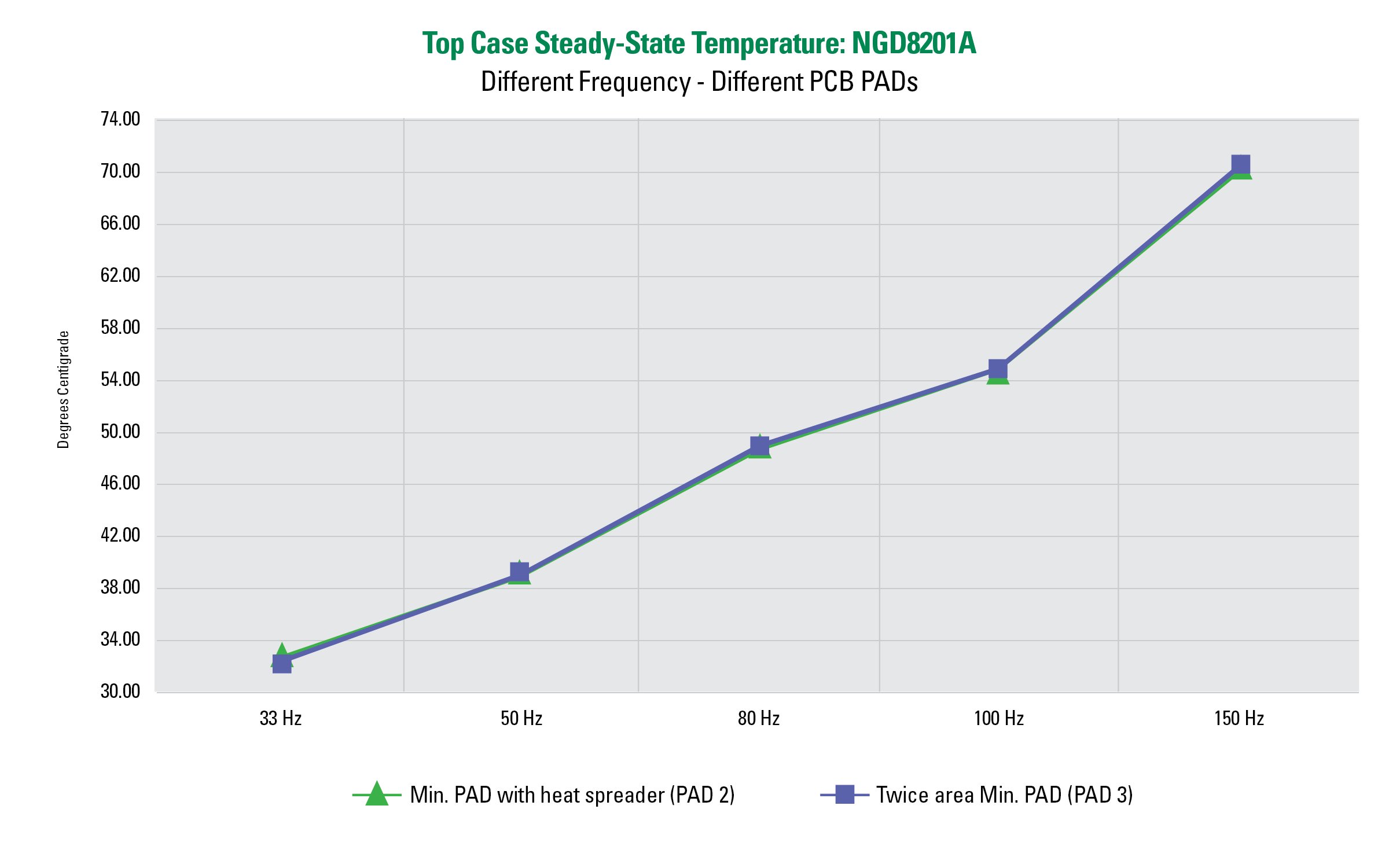 Figure 5: Steady-state case temperature of the NGD8201A using a PCB with the minimum PAD area with heat spreaders between the top and bottom layer (PAD 2) and a PAD with the recommended area (PAD 3).

To comply with these regulations, the automotive industry has to design engines that ensure combustion efficiency which in turn requires Ignition IGBTs capable of sustaining increased voltage levels while providing low power dissipation at increasing switching frequencies. It has been demonstrated that the use of Littelfuse Ignition IGBTs devices which offer lower Vce(ON) together with an appropriate PCB design that considers an optimum thermal dissipation, can ensure safe operation in the harsh working conditions inherent to the automotive industry.

Dr. Hugo Guzmán joined Littelfuse as an Application Engineer for Power Semiconductors in June 2017. He received the Ph.D. degree in mechatronics engineering from the University of Málaga in 2015, and is specialized in power electronics and control. Hugo has worked in automotive, industrial and renewable energy applications in a range of research, consultancy and industry positions since 2007. He is based in Lampertheim, Germany and can be reached at [email protected].

Jose Padilla joined Littelfuse in October 2016 as Global Product Marketing Manager for Ignition devices, extending his role to all Discrete IGBTs from November 2018. Before joining Littelfuse he was Product Marketing Manager at Fairchild and application engineer for EVs at Infineon Technologies. From 2007 to 2011 he worked at AICIA, a research institute in Andalusia, Spain, dealing with power electronic converters for grid efficiency improvement. Jose is based in Valencia, Spain, and can be reached at [email protected].