Most everyone, at one time or another, purchases a new smartphone or tablet charging cable from a discount store that was probably the cheapest cable available, with not even an afterthought about its quality. All cables are the same, right?  And, virtually guaranteed, not one person thought about the repercussions of using low-quality, low-cost cables, with their low-cost connectors, for connecting the power adapter to their smartphone, tablet or Ultrabook™.

Likewise, the micro-USB connectors on our smartphones may become cluttered with dust or lint, potential hazards if not removed prior to connecting the power adapter. With the increasing amount of power running through these cables, connectors, and sockets, these external factors can cause problems that previously were inconsequential.  The advent of new charging protocols and connector types that call out high output power capability to rapidly charge a high capacity battery magnifies the need for new technology to be integrated into the power supply that can help better protect these electronic devices.

Just about every power supply designer has dealt with soft shorts at one time or another when bread-boarding a new design. This phenomenon now wreaks havoc in the mobile space.  Soft shorts are shorts on the output of a power supply caused by a low resistance connection between the power lines and they occur in mobile applications more often than anyone would expect.  A dirty charging port on a mobile device cluttered with dust or lint, low-quality cables with low-quality connectors, or simply forcing the wrong type of cable for the mobile device can cause soft-short conditions between the supply voltage pin and ground.  These conditions leave small amounts of resistance, enough to draw current in excess of the normal operating output power range and enough that the output of the adapter will source a significant amount of power prior to entering over-current protection or over-temperature protection, whichever may come first.  Figure 1 shows the end result of these faulty connections: burned or melted cables and damaged mobile devices, potential issues that are a major concern for the manufacturers of these devices. 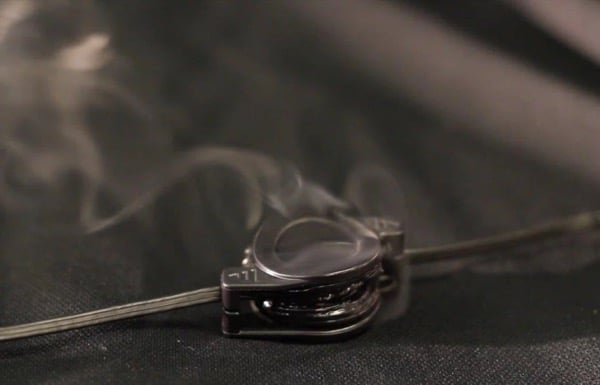 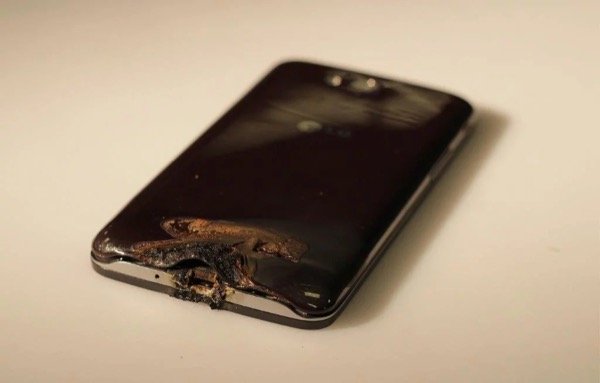 Existing power supplies protect against over-current conditions primarily in one of two ways.  The first over-current protection method entails current foldback and latching.  Figure 2 shows the output characteristics of a foldback current limit circuit.  The output of the adapter is in constant voltage mode up to point A on this graph.  Once maximum output current is reached, the output enters the constant current mode.  The output voltage will reduce during constant current mode in order to match the current demand of the load, in this case, the battery undercharge.  If the load attempts to draw an excessive amount of current, an over-current threshold will force the output into foldback mode.  At point B, both the output voltage and current foldback, reducing the power loss in the converter and somewhat protecting the load. When the output voltage drops below a minimum voltage C, the output of the converter latches off to fully protect the output. 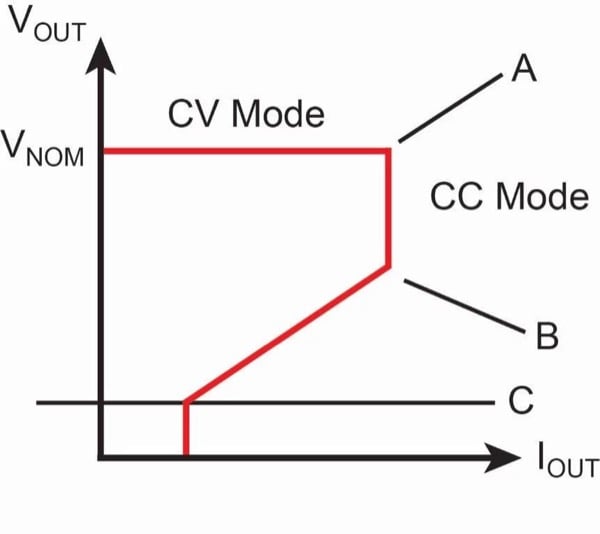 There are two main issues with this technique. The first and primary issue has to do with soft shorts.  In a soft short, in constant current mode or where the foldback current limit threshold has been reached, but not enough to reduce the power dissipation to a reasonable level, a continuous amount of power can still cause damage since the cables and connectors are dissipating the majority of the power output of the adapter, generating dangerous levels of heat.  The second issue occurs when there is a very low resistance short and the output latches off.  In order to reset the charging, the adapter needs to be unplugged for a sufficient amount of time to allow the bulk capacitance to discharge and then plugged back in. If the user does not realize that the adapter needs to be reset this way, or does not wait long enough prior to plugging the adapter back in, it could be deemed faulty and the user might unnecessarily replace it.

The second method prevents the perception that the adapter is completely dead by cycling the power on and off when under a short condition. This cycling, typically called hiccup mode, has the benefit of allowing a temporary soft-short condition caused by a loose connection or from dirt in the connector to resolve itself and resume charging correctly. But, in the event that the short condition persists, repetitive bursts of high power into a short can stress the system to the point where melting or even burning of the plastic connector, cable, or even the mobile device itself can occur.

The issue of damaged mobile devices is very real. To the point where the National Institute of Technology and Evaluation (NITE) in Japan, as well as other government consumer protection agencies, have issued warnings to consumers that recharging cables for smartphones can dangerously overheat. (1)  These warnings resulted from high-profile incidents of damaged phones and cables due to exactly the soft-short issues mentioned above.

New technology to address this important safety issue must tackle the overheating problem, while keeping the adapter functional and avoiding the issue of perceived adapter failure.  Ideally, a solution that allows for auto-retry of the adapter with significantly reduced power dissipation protects the system and at the same time, removes the possibility that the adapter goes to the trash because the consumer thinks it has failed.

Using advanced digital control circuitry to modulate the power-on-reset (POR) duty cycle of the hiccup mode, SmartDefender technology significantly reduces the power dissipated in the system to the point where a soft short can safely exist without the risk of damage. Upon entering a soft-short condition, the output pulses the load for two POR cycles.  If, after these initial pulses, the output current draw does not reset back down to normal operating conditions, the digital control algorithm changes the POR duty cycle to reduce the power dissipated in the system. Figure 4 shows the resulting waveforms of an example system using SmartDefender advanced hiccup technology.  The smart hiccup retry duty cycle in this example is 25% (2/8), reducing the average power dissipation during the fault by up to 75%.

The iW1782, a primary-side AC/DC controller IC, integrates SmartDefender technology to ensure safe and reliable operation under soft short fault conditions. The iW1782 works with the iW636 secondary-side controller to create a RapidCharge™ solution for both Qualcomm® Quick Charge™ 2.0 and 3.0 Technologies.  SmartDefender technology in the iW1782 controller sends out the PWM switching pulses in two POR cycles then blocks them in the next six cycles. This increases the shutdown interval every two cycles and reduces the average power delivered to a short circuit by up to 75% without latching off.

When a soft short occurs in a cable, the most common failure mode is a short between the VBUS power line and the ground. But, at times the short can pull either the D+ or D- data lines in the USB cable or connector up to VBUS. This could damage the USB controller D+/D- pins in the mobile device. The iW636 provides protection on the D+ and D- pins so that in the event of a soft-short condition the D+ and D- pins are protected from a possible overvoltage condition. The iW636 can detect this fault and send a signal back to the primary side controller, the iW1782, so that the charging circuit can be disabled, protecting the USB data lines. This double layer protection of SmartDefender and D+/D- protection provides a mobile charging solution safeguarding the entire charging system, both power and data.

Mobile devices such as smartphones, tablets, and Ultrabooks are expensive and indispensable tools for our day-to-day lives. Protecting these devices now goes beyond dealing with basic faults.  Integrating advanced technologies to detect and protect against less common, yet equally important faults has become a necessity. Advanced hiccup technology such as SmartDefender enables safer and more reliable power adapter solutions to power and protect our mobile devices.