This article discusses the novel Silicon Carbine based hybrid surge suppressor module for safeguarding AC and DC power circuitry and its benefits.

Transient and surge suppressors are commonly used to protect systems from lightning strikes, ESDs and short-circuit scenarios. They fall roughly into two categories, the first of which is a ‘fuse and crowbar circuit’; examples of which are shown in Figure 1. Such circuits are used to prevent an input over-voltage (surge) condition from damaging downstream circuitry. They all operate by creating a very low resistance path - using a thyristor, TRIAC, trisil or thyratron - to effectively create a temporary short-circuit. Current is then limited on the source side by a circuit breaker tripping or a fuse blowing. Or, to put it another way, circuit breakers and fuses rely on overcurrent to protect against overvoltage. Both leave downstream circuitry without power once tripped/blown. 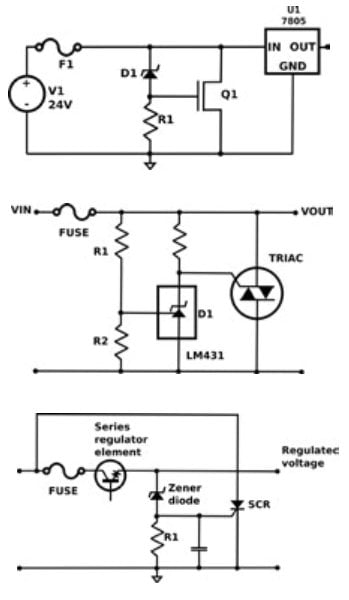 Figure 1: A variety of fuse and crowbar surge protection circuits. The shorting components are (left to right) a MOSFET, a TRIAC and Thyristor (SCR). In all cases the shorting elements producing an over-current which blows the fuse.

The second type of transient/surge suppressor is a clamping device. Whilst not shortcircuiting, it does decrease its resistance to limit the voltage (to a rated clamping voltage). Common devices used are the Zener diode and the Metal Oxide Varistor (MOV), which have both strengths and weaknesses. For instance, in the ideal world, the clamped voltage would be constant, irrespective of current. In reality, MOVs and Zener diodes are not linear devices and above a certain current the voltage will start to rise. Of the two device types, an MOV is able to sustain a high voltage and dissipate a large amount of energy, but above a certain current the voltage across its terminals will once again increase. Conversely, a Zener diode can maintain a relatively constant voltage, but is unable to dissipate a lot of energy while triggered (typically just a few mJ).

Clearly, in order to efficiently protect downstream circuitry from the effects of a lightning strike or ESD, voltage clamping alone will not suffice. An optimal Surge Protection Device (SPD) must: clamp the over-voltage at the load; limit the over-current; dissipate the power surge energy and remain functional after the surge has passed. It must also have a fast response time, as a limiting factor with traditional Silicon-based suppressors is that they take about 10μs to short-circuit.

CALY Technologies, a spin-off from the Ampere-Lab at INSA de Lyon, is currently developing a hybrid Surge Current and Voltage Limiting Device (SCVLD), which will ultimately take the form of a three-pin module. It comprises an MOV, a Zener diode and a SiC-based Current Limiting Diode (CLD). The architecture (see figure 2) is such that, with suitably-sized components, it is possible to get the clamping benefits of both the MOV and the Zener while avoiding their shortcomings; i.e. not being able to limit voltage over certain currents and not being able to dissipate high energies, respectively.

When subjected to an ESD with a pulse shape of 8/20 or 4/440, the SPD has four distinct phases of operation:

The principle of operation depends on the MOV clamping voltage being higher than the Zener avalanche voltage (Vz). Also, the CLD must be able to sustain short circuit operation and have a very fast response time. In this respect, Silicon Carbide’s low electron mobility comes in to play; 1,000cm2/V.s compared to Silicon’s 1,500cm2/V.s (and GaN’s 1,250cm2/V.s, by the way). The CLD must be able to dissipate the bulk of the surge energy, which it does by producing heat. Here, Silicon Carbide’s high Thermal Conductivity is essential; 4.9W/cm.K, compared to Silicon’s 1.5W/cm.K (and GaN’s 1.3W/cm.K). In addition, when two CLDs are placed in series, back to back, the circuit is able to protect AC as well as DC power lines.

Spice models of all three devices were explored in order to set optimum clamping voltages for the MOV and the Zener as well as ISAT for the CLD, and in late 2015 a prototype circuit was produced and tested at Mersen’s facilities in Terrassa, Spain. It was designed to protect a 540V load (typical of an aircraft’s or a solar plant’s DC bus, for example) and subjected to a series of surges. For comparison, the load was also subjected to the same surges with just an MOV for protection and without any protection at all (see Table 1). 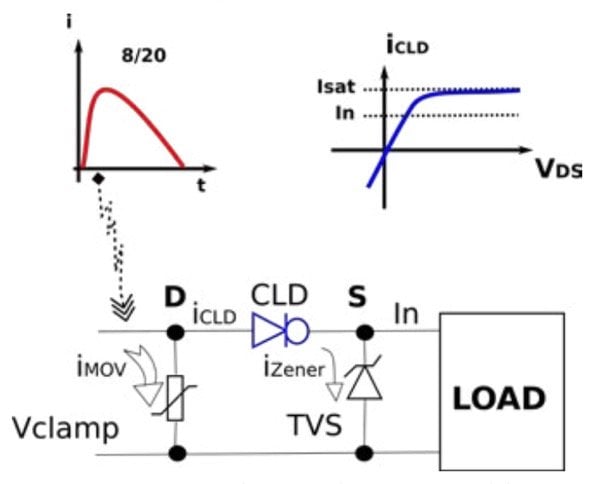 Figure 2: The architecture of the hybrid SPD, in which the SiC-based CLD makes it possible to get the best clamping benefits of the MOV and the Zener (TVS)

The results were extremely encouraging, with the circuit providing more than a 2.7 times the protection of the MOV (alone) when the surge current was 1.8kA – see Figure 3. Moreover, voltage and current were clamped within a nanosecond, in comparison to more than 25ns for MOVs.

Figure 3: An experimental comparison of an MOV (only) and the HSPD protecting against a 1.8kA surge. In all cases the shorting elements produce an over-current which blows the fuse.

Presently, the hybrid surge protection technology is only available as a DIN mounted unit, and the circuit within is built from discrete components. However, CALY Technologies is working closely with Raytheon UK’s Semiconductors Business Unit in Glenrothes with a view to commercialising the technology as a three-pin and much smaller module.

Raytheon has more than 13 years of SiC device fabrication experience, including involvement on a project to develop current limiting technology for protecting aircraft electronics and wiring from the secondary effects of a lightning strike. However, while this experience is important, it is only part of the reason for the collaboration on the hybrid surge protector. Raytheon is Europe’s only independent production–qualified foundry, offering a SiC fabrication service that is flexible enough to support short process loops (e.g. development work) as well as turn-key volume work. 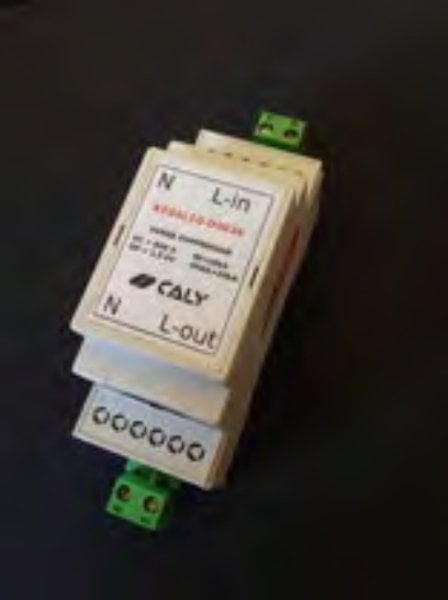 Figure 4: Presently available only as a DIN module CALY Technologies’ hybrid SPD could soon be available as a much smaller form factor 3-pin module and the company is working closely with Raytheon UK’s Semiconductors Business Unit in Glenrothes regarding the fabrication of the SPD’s SiC-based Current Limiting Diode.

The company can also manage the entire supply chain, from SiC substrate sourcing through to wafer sawing and packaging. In this respect, and of most appeal to CALY Technologies, Raytheon UK represents the fastest and lowest risk route to market for its innovative SPD design.

Dominique Tournier works as the Chief Technical Officer (CTO) at CALY Technologies. He received his Ph.D. degree from the Institut National des Sciences Appliquées (INSA), Lyon, France, in 2003. From 2005 until 2015, he was Associate Professor at Ampère-Laboratory (INSA Lyon). His interests and developments were in SiC device design and fabrication for high power electronics applications and functions integration for high temperature electronics. He has supervised 4 Ph.D. theses and has authored and coauthored more than 120 research papers in journal and conferences mostly on SiC devices and applications. He also holds 7 patents mostly focused on protection devices and systems.

Pierre Borsselard works as the CEO of CALY Technologies, an innovative Wide Band Gap (WBG) specialist company, dedicated to support customers in their development of WBG power electronics activities. He is specialized in the field of research and development, simulations and power electronics. He holds a Master's Degree on MicroElectronics earned from Claude Bernard University Lyon 1 located in France. He finished a General Academic Studies Degree in Physics and Mathematics at Jean Monnet University (Saint-Etienne).

Phil Burnside works as the Business Development Manager at Raytheon UK where he is focused on Silicon Carbide semiconductor technologies for power electronics applications as well as SiC processing and fabrication capability for device development, process transfer and full production volumes. He earned his Bachelor's Degree in Engineering Physics / Applied Physics at Bell College located in Hamilton, Scotland.