Power converters are expected to be highly efficient, cost-effective, compact, and reliable [1]. Also, the tolerance towards output voltage fluctuation should be very low despite the variation of the input voltage over a wide range. This is demanded by the vast array of applications they cater to — including but not limited to power supplies of various scales ranging from laptops to spacecraft control systems, and motor drives to the telecommunication industry.

The basic concept still remains the production of the regulated output voltage. What conversion techniques enable this behavior? Read on to learn more about the DC-DC conversion principles.

An Overview of Converter Circuits

In converter circuits, the switches control the dynamic transfer of power from the input side to the output side. They are either in full on or fully off state with short transition times between the states [2].

The semiconductor components employed as switching devices can be:

These are shown in Figure 1.

Figure 1. Semiconductor-based switches used in converters. Image used courtesy of All About Circuits

The voltage waveforms across the components are typically periodic in nature with pulse-width modulated (PWM) square waves, rectangular waves, or a combination of these. Similarly, current waveforms can be triangular to trapezoidal.

A huge number of converter circuits are available that are capable of increasing or decreasing the magnitude of the input voltage along with possibly inverting its polarity.

An ideal DC-DC converter exhibits 100% efficiency, but in practice, 70 to 95% efficiencies are observed. This can be achieved by employing switched-mode or chopper circuits that dissipate an almost negligible amount of power. The operating principle is based on stepping up or stepping down the voltage based on the need.

Other variants that possess a coil in one form or the other are typically a combination of a step-up circuit and a step-down circuit or their applied circuits. However, the underlying conversion principles in these are mostly the concept of resonance and some magnetic aspects.

Switching involves the conversion of one DC voltage to another — it can be higher or lower than the input and is made possible by temporarily storing the input energy followed by releasing this energy in a controlled manner to the output at a different voltage as per the requirement. This is primarily governed by two important concepts: resonance and magnetics.

A network of passive devices like inductors and capacitors are part of most power converters. These passives form a resonant tank that is tuned to resonate at a particular frequency based on the concept of resonance. A sample resonant tank circuit is shown in Figure 2. 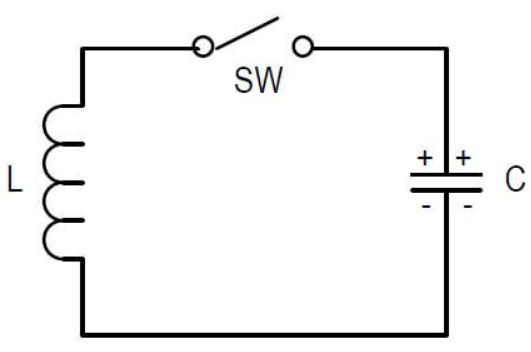 The converter operation in resonant mode is defined as the point where impedance between the input and output of the circuit is at the minimum point [3].

Switching when the drain to source voltage is almost negligible (zero voltage switching, or ZVS) and transitioning between the switching states while there is a negligible amount of current flowing through the switch (zero current switching, or ZCS) ensures reduced switching losses. This principle is also referred to as soft switching and it also helps reduce electromagnetic interference (EMI).

Magnetic design aspects form an integral part of the converter design and are mostly inseparable. Thus, from the early design stages — like the modeling of the intended converter — it is crucial to model and design the necessary magnetics associated with it. This stage enables understanding of the required magnetic elements, their operation once integrated, and provides insights into the design of the magnetic devices for the switching converter.

One of the key magnetic elements critical for a converter is the inductor. The type of inductors like single-winding, multiple-winding, or coupled inductors are decided based on the converter’s requirements and the design is initiated. The goal is to optimize the design based on the required magnetics for the appropriate converter operation and ensure superior performance. Minimizing the total losses is a key goal for magnetics design and the design procedure accommodates factors like a minimal copper loss as basic constraints.