The renewable energy sector has grown exponentially in the last decade and seen changes in photovoltaic module technology. This article provides an overview of photovoltaic technologies and where to use them.

Solar is the most abundant source of energy. The sun emits radiation that, if harnessed the right way, could be used as a water heater or light system. In 1983, Bell Labs was able to convert solar irradiance into electric energy using a photovoltaic module. Since then, companies and researchers have been developing this technology to harness more of the sun’s energy. 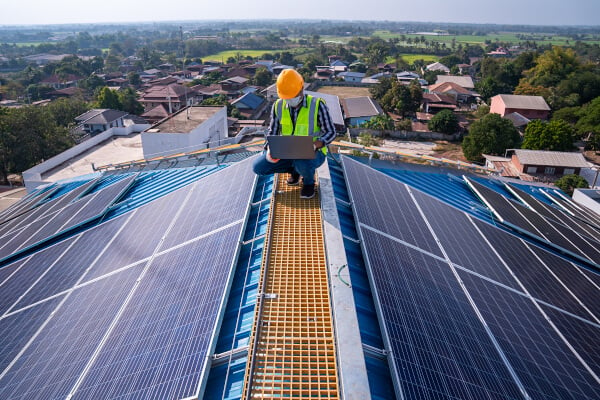 Photovoltaic cells contain doped silicon which is a light-absorbing semiconductor. Therefore, the cell type is the main consideration when choosing the solar panel. There are three types of silicon cells used: monocrystalline, polycrystalline, and amorphous.

Monocrystalline: Monocrystalline cells are made of a single silicon source. These cells are best used in rigid installations due to their high efficiency. The downside is the high price of manufacturing.

Amorphous: Amorphous cells are non-crystal silicon cells. They are used in flexible solar modules, also called thin-film solar modules. These modules are used mostly in building embedded solar systems, such as window-integrated solar systems. These cells are inexpensive but have a lower efficiency compared to mono-crystal and poly-crystal cells. 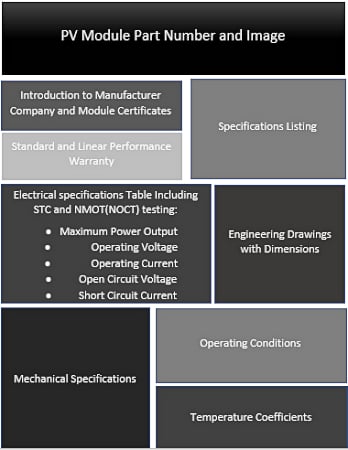 A typical datasheet for a solar module (section locations in datasheets might change but content should be the same). Image used courtesy of Ahmad Ezzeddine

A typical datasheet contains all information regarding the product.

Solar module manufacturing companies are classified into tiers. Usually, these tiers improve the warranty trust between the manufacturer and the company.

Tier 1: A solar panel manufacturer with long-term experience in PV module manufacturing and sales (over 5 years). These companies usually have experience in research and development, and produce their own solar cells.

Tier 2: These companies have less experience in solar module manufacturing and usually purchase the cells for their PV modules from Tier 1 companies. 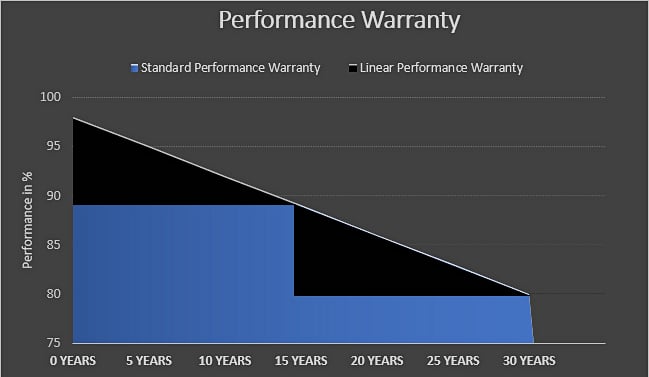 STC: Standard Test Conditions are conditions in which a solar module is tested. These conditions are Solar Irradiance at 1000 W/m^2, Cell Temperature at 25 °C, and Air Mass at 1.5.

NMOT: Nominal Module Operating Temperature, also called Nominal Operating Cell Temperature (NOCT), is testing cell temperature and electrical characteristics under a solar irradiance of 800 W/m^2, air temperature at 20 °C, and wind speed at 1 m/s. The NOCT is usually specified in the datasheet between 43  °C and 47  °C.

The listed specifications in the table include:

Efficiency: The maximum efficiency of a photovoltaic module is defined as the rate at which a module can harness sunlight and convert it to electrical energy.

IV curves: Solar controllers utilize maximum power point tracking for the most power of the photovoltaic cell. The IV curves present the current versus voltage characteristics in a solar module at different solar irradiance and temperatures. The maximum power points are set where the maximum voltage * maximum current at a point is achieved. 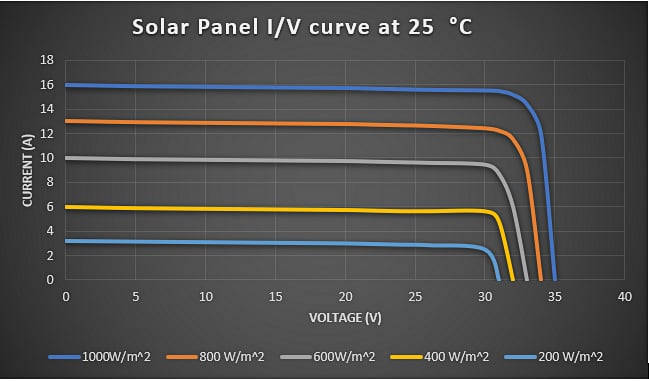 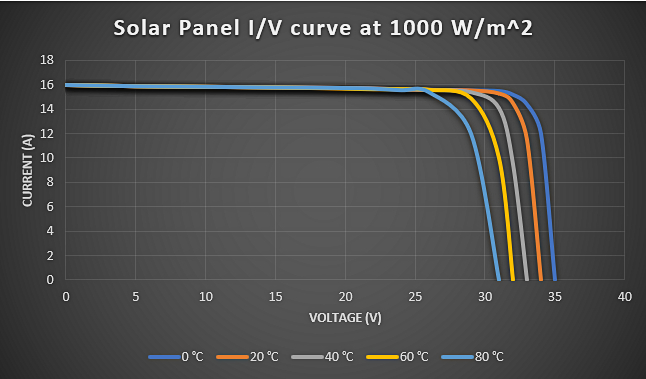 Module weight and dimensions: These are important factors in designing the structure used for solar panels.

Glass specifications: States the glass thickness and type of the coating used.

Maximum System Voltage: This is usually set according to IEC standards (1500 VDC on utility scale).

Safety Class: The safety class is the user protection of electric shocks and is set by the levels of insulation on the solar panel.

Half cell solar panels: The half cut cell technology has taken over a big share of the photovoltaic market. It is described as cutting a solar cell in half, therefore, having many advantages over full-cell modules. Electrically speaking, the half cut cells have half the current of a normal cell, therefore, ohmic losses are lower and performance is enhanced.  Half cut modules perform as two separate modules, therefore, the shading effect on one side doesn’t affect the other. Mechanically, the smaller the area of a cell the lower it is affected by stress factors, so half cut cells are more durable than normal cells.

Shingled technology: As the name states, solar cells are made into shingles after being cut by a laser into five strips. A conductive adhesive connects the five strips so no soldering is needed. Due to the low current on each strip, the number and thickness of fingers connected to the busbar are significantly lowered. Due to the small thickness of fingers and busbars, the shading effect on the whole solar panel is lower. The only challenge facing shingled technology is the cost of manufacturing the modules. The process of manufacturing is also slower than other module technologies.

Tilling technology: Tilling is a manufacturing process in which half cut cells inside a module touch each forming minor overhangs. Then solar cells are connected using ribbons. The process of manufacturing is easy. The advantage of tilling is increasing the efficiency of the module and reducing ohmic losses.

Dual glass PV modules and bifacial PV modules: Normal solar modules have a white back sheet on the rear side of the module. The back sheet is used to protect the module. Glass has not been used in the back for a while. Recently some manufacturers started replacing the back sheet with glass therefore the solar module power output increased by 30%. This is called double glass technology.

Other manufacturers started connecting busbars and ribbons on the back side of the photovoltaic cells and using glass on the rear side of the module, therefore increasing the power output up to 50% in some cases. This method is called bifaciality.

Some manufacturers considered having glass on both sides terminates the need for an aluminium frame and enhances the bifaciality factor, therefore now there are in the market framed and frameless bifacial and double glass photovoltaic modules.

The disadvantage of these technologies is the extra weight of the photovoltaic modules.

N-type photovoltaic cells: N-type solar cells are doped with phosphorus instead of boron. There are several advantages of N-type cells over traditional P-type cells, including lower annual degradation, lower power temperature coefficient, lower light-induced degradation, and higher bifaciality factor. The most common N-type cells are TOPCON for the ease of converting a solar panel factory from P-type (PERC), the most common cells in the market to TOPCON. Heterojunction (HJT) cells need a new manufacturing system but have a simple manufacturing process.

To choose the right solar module take into consideration:

Equation of LCOE where It is the initial cost of investment, Mt is the maintenance and operation cost, Ft is the fuel cost if needed, Et is the total electricity generated, r is the discount rate and n is the life of the system.