This article discusses the advantages and features of Eltek's Rectiverter in terms of design simplicity, flexibility and cost-effectiveness.

There are many applications in a variety of industries where there are requirements for both AC and DC power systems. Typically, this has meant customers must source separate power systems from different vendors complete with separate back up systems.

In other high power density applications – like data centers – operators are looking to be as energy-efficient as possible and are transitioning from AC to DC power systems, resulting in a need for both power types.

In these applications, customers want a smaller power system footprint and high efficiency, which makes power density a critical issue. For years, power systems manufacturers have responded to this need by incrementally increasing power conversion efficiency in their own AC and DC systems. The new efficiency standard is 96%, set by Eltek in 2008 with the debut of the Flatpack2 HE system.

This has done a lot to make smaller, more reliable power systems, but has still left customers to manage separate power and backup systems.

Now there’s a more revolutionary way to meet the increasing power needs of these applications: the Rectiverter a breakthrough power system that combines a rectifier, inverter and static transfer switch. All of this fits into the current Flatpack2 power shelf, but replaces multiple separate systems that need multiple monitoring systems.

The Rectiverter arguably represents one of the biggest developments in the power electronics industry in many years and offers new levels of design simplicity, flexibility and cost-effectiveness.

How a new category of power modules was developed

The Rectiverter came into being quite by accident. My colleague Nils Bäckman, Eltek’s R&D manager in Stockholm, tells the story of how his team was tasked with developing a high-efficiency inverter. While working on this task, one of his engineers shared an idea he had for the Rectiverter and that shifted the focus of the entire team and, following that idea, they had a working prototype within several weeks. 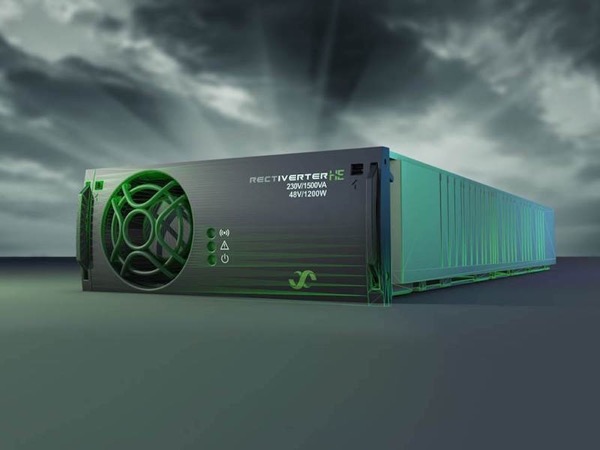 What they developed was a module with one AC input port, one AC output port and one bi-directional DC port that can accept power input from a battery, charge the battery and also provide power output to the load. In normal operation, the Rectiverter module provides up to 2000W of AC and DC power output. The AC input power is first rectified and then sent either to an inverter to be turned back into AC power, or to a DC/DC converter to be changed to the proper output for the load and the batteries.

The first available Rectiverter module delivers 1500 VA at 230 V AC and 1200 W at 48 V DC. The total capacity of the module is 2000 VA (combined AC and DC). The module achieves >96% efficiency when operating in the mains mode (AC-AC and AC-DC) or >94% efficiency when operating in the inverter mode (DC-AC). Rectiverter systems are available as single-phase or three-phase, input and output.

Bidirectionality is a key breakthrough

The insight that brought about the Rectiverter was the concept of a bidirectional power flow between the three functions inside the module. This capability means that it can control the conversion process in reverse and forward mode and can also can switch instantaneously between either mode of operation.

That’s how the module can provide both AC and DC outputs at the same time operating with a single input and a single back up battery plant. In the event of a mains failure, the back up power is seamlessly triggered and the power flow from the DC port is reversed and fed through the inverter to maintain the AC load, while the DC load is fed straight from the batteries.

From module to system

The Rectiverter module is designed to operate in a redundant configuration in its own power shelves. The 6kVA single-phase power core takes up to four Rectiverter modules, where as the 18kVA 3-phase power core can hold up to 12 modules. The chassis dimensions are very similar to Eltek’s existing products so that they have conventional depth and width to be installed in a 19-inch telecom rack. Systems can contain up to 96 Rectiverter modules and can also be combined with other Eltek power conversion modules with the same DC voltage.

Both power cores also leverage Eltek’s Smartpack 2 and Smartpack S controllers that provide advanced management of operational health of all of the modules and of the back-up batteries. In fact, the advanced battery management can help to remotely manage and predict battery capacity loss to ensure the maximum lifetime of each battery. These controllers also monitor other Eltek systems, which provides the ability to combine rectifier, converter and inverter systems with the Rectiverter in flexible ways.

The dual power outputs of the Rectiverter offer exceptional powering flexibility in mixed AC and DC environments. The system can be configured for any power level combination (within the Rectiverter’s output capacity). This can save a lot of space in many applications and ultimately reduce the cost of the power system and the ongoing cost of managing the power system.

While the Rectiverter has many markets in which it can add value, some of the initial applications include:

Telecom: Most telecom network locations have a requirement for both AC and DC supply with battery back up to meet laws aimed at maintaining phone service when power is down. The solution in most cases is to install separate DC systems with either inverters or separate AC-UPS’. This is especially true in wireless applications and even emerging small cell and remote radio head applications where space is at a premium, but some key pieces of equipment are AC-based. In these telecom applications, the Rectiverter is both less expensive to purchase and to operate, compared to separate systems, and offers the unified management to simplify monitoring of the power system.

Rail & Metro: In a modern rail system, there are many applications where AC and DC are required. One unique rail application is the level crossing where power systems must include large battery back up capacity to power the crossing during an extended mains outage. Most equipment in these locations is AC, but the batteries need to be charged from a DC system. The system redundancy of the Rectiverter is very attractive in this application because it can deliver N+1 redundancy compared to the current monolithic UPS alternative that provides only 1+1 redundancy. Here the Rectiverter provides system simplification, improved reliability and reduced total cost of ownership.

Power Utilities: There are many applications in this industry, including powering switchgear, communications, safety and emergency, and automation equipment, where providing a mix of different electricity types and voltage levels is required. In these applications, the Rectiverter system significantly reduces complexity and provides a new level of flexibility for AC and DC output power. By combining the Rectiverter with other DC/DC converters in the same chassis, a single system can be built for these applications that is all controlled by a single system controller.

Marine & Offshore: In a marine application, space is at a premium and so the high power density and combined AC/DC output capabilities of the Rectiverter are very important. A ship can be outfitted differently for each voyage; with the modular Rectiverter system, the load can be scaled up through the hot-swap installation of new modules. This compares with the traditional monoblock UPS, which is not incrementally scalable - the whole system must be duplicated or replaced with a higher output replacement. Another benefit for space-constrained applications is that Rectiverter sparing involves just the modules and not an entire replacement power shelf.

As these examples demonstrate, the Rectiverter is really a breakthrough new product for the power industry. By harnessing the capability for bidirectional power flow, the Rectiverter delivers new flexibility, design simplicity and lower cost for today’s applications. But the future impact of bidirectional power technology can only now be imagined in terms of future systems that optimize the energy flow and energy storage to facilitate much smarter and effective power distribution.

Gunnar Hedstrøm is one of Eltek's Product Managers and is the leading expert in bidirectional power topology at Eltek.