This article highlights the advantages of GaN E-HMET from GaN Systems over the conventional silicon-based IGBT and MOSFET inverter solutions.

At DRS, we set a goal to design an improved generation of our 2kVI vehicle inverter. During our development process, we compared the performance of silicon-based IGBT and MOSFET solutions versus the recent emergence of normally-off, E-HEMT GaN devices. This paper describes how GaN devices allowed us to alter our design approach with the result of increasing switching frequency by a factor of four and the added advantage of producing significantly smaller inductors. We were also able to deliver 98.5% efficiency over a wide operating range, enabling us to reduce the overall cooling system. In the end, for the same cost, we were able to deliver a significantly smaller and lighter unit with higher efficiency than ever. 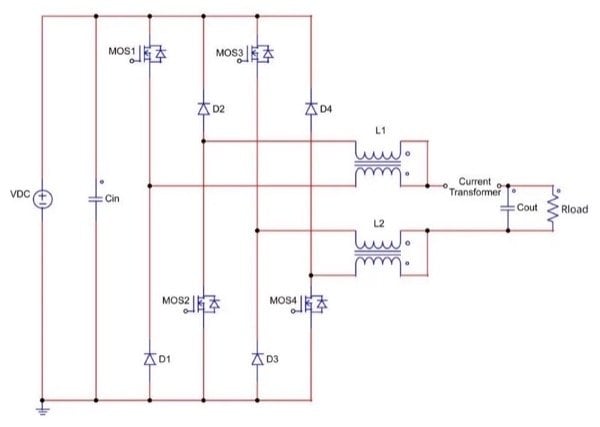 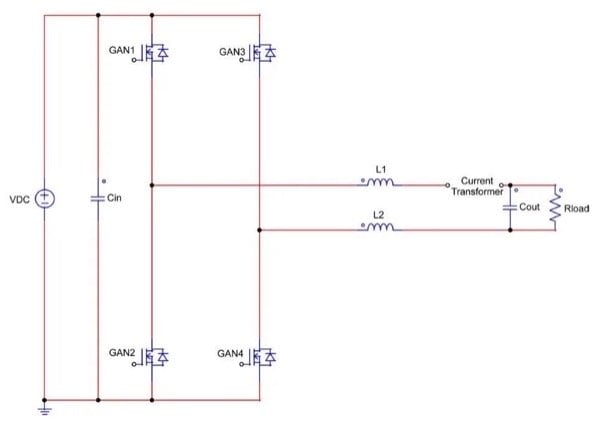 A traditional single-phase inverter would likely use a Full Bridge Inverter topology. In traditional inverters using this topology, either IGBTs with fast anti-parallel diodes, or silicon MOSFETs can be used for the switching devices. The IGBT solution is popular in many applications due to its low cost and minimization of the diode recovery current that would otherwise be experienced with MOSFETs. However, IGBTs cannot operate efficiently at high frequencies, nor can they achieve extremely low conduction loss conditions because they are junction devices and will always exhibit a forward voltage drop (or offset) when conducting. This limits the minimum losses that can be obtained. However, if silicon MOSFETs are used, then the forward voltage drop is replaced by a resistive element which can be progressively lowered by adding more devices in parallel. But the Achilles heel for MOSFETs in this topology is the presence of a body diode and associated reverse recovery currents and losses that will occur as devices hard switch and forcefully commutate the associated conducting body diode. In summary, the use of the traditional topology with only silicon technology is limited by both maximum attainable frequency and efficiency.

The most critical design requirement we identified when we set out to develop our ruggedized 2kVI vehicle inverter was efficiency. We knew that in order to develop a product that would be reliable in rugged vehicle applications, it would need to be fully sealed and able to function at high temperatures without significant airflow. We also did not want the product to be liquid-cooled since this would constrain the end user’s ability to deploy the product. These design constraints demanded a product of the highest practically attainable efficiency. Given these constraints and the state of transistor technology at the time, we used the Dual Buck Inverter topology with silicon MOSFETs and SiC diodes as the switching elements. This topology functions identically to the traditional Full Bridge Topology. However, it effectively isolates the MOSFET body diode from the scene, thus eliminating the efficiency limiting reverse recovery losses. We also chose MOSFETs instead of IGBTs in this application so that we could parallel the MOSFETs, thus reducing the switch resistance and lowering the losses in the device. This topology provided very good performance and generally achieved above 98.5% efficiency over a wide operating range. However, this high-end efficiency performance did not come without a penalty. As is obvious in the two simplified schematics, the Dual Buck topology is considerably more complex, requires more power components, occupies more space, and costs more than the traditional solution.

Despite achieving ultra-high inverter efficiency, we came to a juncture in our product development where we were able to re-evaluate our development plans against recent technology trends and product releases. At that time, it became clear that GaN devices were the real deal. They were reliable and available to be considered for this product’s development. So we changed our development plans to use the latest GaN devices with the traditional Full Bridge Topology. Since GaN devices are not junction devices, they exhibit the same resistive behavior as Si MOSFETs, yet they have the additional benefit of excluding a body diode, thereby enabling high efficiency with this topology. By using GaN Systems’ GS66508P device we are able to achieve the same ultra-high efficiency conditions with far less complexity and components, and thereby package the power stage within a smaller printed wire board area.

The following is a comparative summary of the three types of inverter solution designs:

This inverter solution can be achieved in a cost-effective manner and with a minimal number of components. However, the targeted efficiency cannot be achieved with this solution. A larger thermal solution would need to be used to dissipate the additional heat.

The efficiency target is obtained and therefore a smaller thermal solution is usable. However, many more components are needed to implement this topology and to bring it to the ultra-high efficiency range. In our original implementation, we used two MOSFETs in parallel for each switch and two SiC diodes in parallel for each diode. This translated to needing a total of 16 semiconductors, and in addition, the output inductors require a coupled inductor design which is more complex and larger than an equivalent single winding inductor used in the Full-Bridge variant. The additional paralleled MOSFETs also require additional circuitry in the gate drive to allow the devices to work optimally in parallel.

The GaN technology shown in Figure 3 enables this topology to achieve ultra-high efficiency with a low part count. In our most recent implementation, we only needed a single GaN device per switch and no diodes to achieve the target performance level. Therefore, only four semiconductors and two simpler inductors are needed. In addition, the GaN devices can switch much faster than the silicon devices, enabling the switching frequency to be increased by a factor of four while maintaining the same ultra-efficient performance of the Dual Buck Inverter. At higher frequencies, we can reduce the cost and size of the output inductors and filter capacitor by a factor of two, and the area needed to house the semiconductors by a factor of four.

At higher frequencies, we can reduce the cost and size of the output inductors and filter capacitor by a factor of two, and the area needed to house the semiconductors by a factor of four. 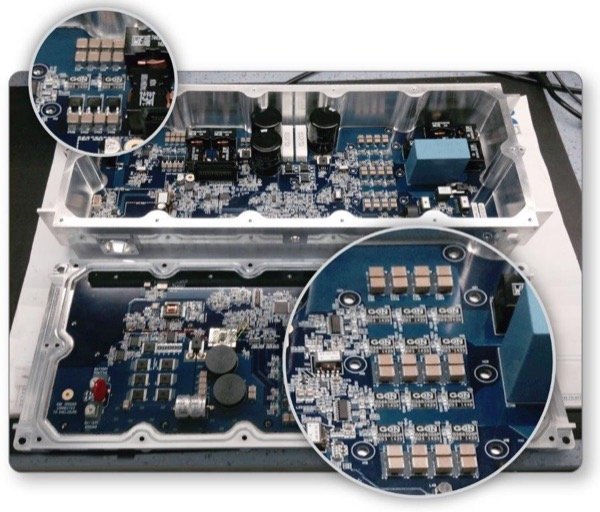 Even with the added cost of GaN devices versus silicon devices, and when considered with the downward pricing trend GaN devices are already exhibiting, the cost to implement an ultra-high efficiency inverter is really no higher for the GAN-enabled Full Bridge compared to the Si/SIC-enabled Dual Buck Inverter.

Table 1: Comparison of Silicon and Gallium Nitride in Inverter Topologies

In addition to ruggedized vehicle inverters, other products will also benefit from the use of GaN devices. Any application that needs a bipolar switching operation where a reverse conducting diode comes into play will do well by applying GaN technology. Specifically, this is true for any high power, galvanically isolated power conversion stage, especially if bidirectional power flow is needed. These applications can capitalize on GaN transistors and, thereby, reduce the size and weight of the transformers and the input and output filter stages and also eliminate the reverse conducting diodes.

Scott Ramsay has over 28 years of experience in the design and development of military-grade power electronic systems. He has managed many research and development projects, include qualification programs for a wide variety of systems and customers. He works at DRS Technologies as an Engineering Manager since 2003. He earned his Bachelor's Degree in Electrical Engineering at the University of New Brunswick. He also holds an Engineering Doctorate at the University of Prince Edward Island.