This article will explain the continuum of often conflicting technical and application requirements faced when designing a new IGBT-based power module targeted for use in automotive and Commercial, Construction, and Agricultural Vehicle (CAV) traction drives.

When the Infineon design team started working on a new IGBT based power module, the HybridPACK™ Drive, and HPDrive for the automotive and CAV traction market, it was important to focus on the needs of the end-user and have a clear understanding of the application requirements. Amongst these are such diverse elements as low cost, high efficiency, power density, torque at the locked rotor, lifetime due to temperature cycling.

This article describes how all aspects of the new module design were combined with the stated goal of providing an end product. With this, it would be the best fit for all of the requirements and what improvements were made compared with the well-established, existing HybridPACK™ 2, HP2, module.

The focus of the article will be on three of these technical requirements: power loss reduction, module packaging, and higher stall current ratings, with cost casting its long shadow over all design decisions. The resulting module package is shown in Figure 1. 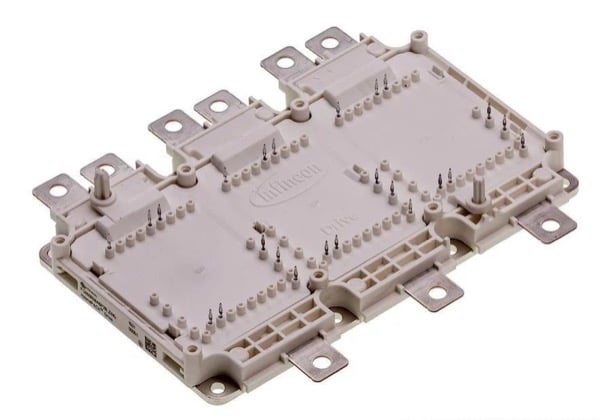 In a typical power converter, the IGBT module is the source of the majority of the power losses. The losses can be reduced with the increased capability of the energy source. For example, a battery pack or generator driven by an internal combustion engine ICE, but it will reduce the requirements for the entire cooling system i.e. pumps, heat exchangers, etc. All this can save cost and weight in a vehicle. There are three main sources of losses in the module: silicon conduction losses, silicon switching losses, and copper or I2R losses.

For the module, a new chip was developed named Electric Drive Train 2, EDT2. The new EDT2 750V IGBT chip features a similar vertical structure to the previous IGBT3 650V generation, but with an improvement using a “Micro Pattern Trench” structure based on the TRENCHSTOP™ 5 chip design, with a sub-μm mesa width (see Figure 2). This construction enables the device to have a very low forward voltage drop (Vcesat) while still keeping a ≈ 5µS short-circuit capability (see Figure 3). 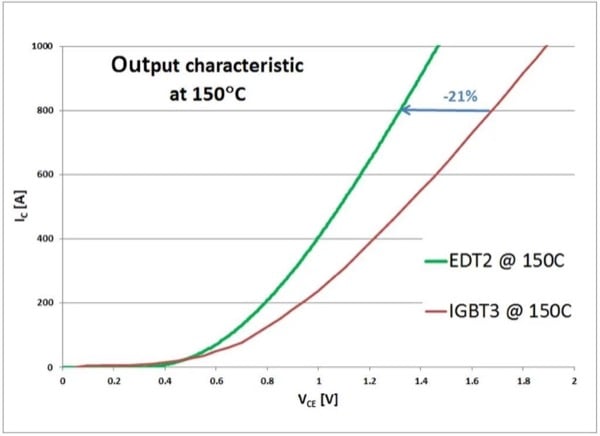 Figure 3: Output characteristics of an IGBT3 and EDT2 chips of the same size

The p-emitter strength was chosen as a compromise between surge voltage capability and switching speed. Besides the maximum peak overvoltage withstand level, the p-emitter also influences the Eoff vs. Vcesat trade-off point. The 100V increase in blocking voltage from 650V to 750V minimizes overvoltage as a limiting factor. The result shows that there is no need to slow down the switching speed, e.g., by the use of an increased external gate resistor, to stay within the IGBT RBSOA curve. The turn off losses were reduced by up to 29% compared to an IGBT3 operating with an increased gate resistor value at a bus voltage of 440V as shown in Figure 4. 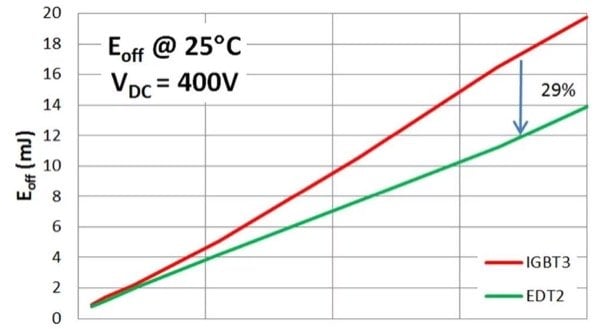 Figure 4: Comparison of turn-off losses for IGBT3 and EDT2 measured in the same package at VDC = 400V. 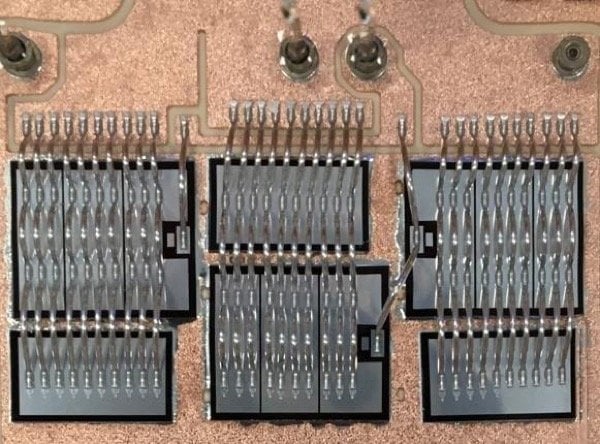 Often overlooked, I2R or copper losses internal to the module can be significant, especially at high rms currents. Three main components of this loss are the main bus terminals, the top surface of the Direct Copper Bonded DCB ceramic, and the bond wires connecting to the top side of the chips. Designing the IGBT chip with a gate pad located at the side of the chip rather than the center allows a larger copper area for the main emitter current path (see Figure 5). Also, adjusting the shape of the chip to be more rectangular allows for an increased number from 8 to 10 and shorter bond wires, for the top side die to attach (see Figure 5). In total, the series resistance was reduced by 20%.

The base HPDrive package has carried over the pin fin and internal material stack from the well-proven HP2 family. However, the HPDrive comes with a 36% smaller baseplate with weight reduced by 40%, all leading to a lower cost. It also introduces a flexible control pin placement system, giving the module designer the ability to optimize the placement of the control pins (see Figure 1). This reduces the copper trace area required for control connections on the DBC. Also, as the control pins are not molded into the package, future upgrades such as on-chip temperature or current sensing can be more easily integrated into the package.

PressFit technology was used for the connection of the signal pins. This is a fast and reliable production process compared to selective soldering and the gas-tight connection is very robust against corrosive environments and vibration. For the power tabs, the DC terminals are height staggered to simplify the connections to a laminated DC bus and there is an option for elongated output terminals to fit a current sensor (see Figure 6). With the current sensor terminals at the same height as the module control terminals, the current sensor can be attached to the gate driver PCB directly, eliminating the use of additional cables and connectors. A smaller package and optimization of the module’s internal layout has enabled a 40% reduction of inductance from 14nH (HP2) to 8nH. This reduces the voltage overshoot for the IGBT’s allowing faster switching speeds and/or operation at a higher DC bus voltage.

The stall or locked rotor mode (sometimes referred to as “hill-hold”), is often the point of highest temperature stress on the device silicon as the current can flow in a single device at the peak of the sine wave current waveform. As a result, the corner operating point can set the limit for the power module current capability. The new EDT2 chips have the capability to operate for short time periods — less than 10 seconds — at 175°C to meet the stall condition requirement. Table 1 compares the operation of the HPDrive and the HP2 at the stall and shows that 300mm2 of EDT2 chips can match the stall current rating of 400mm2 IGBT3 chips.

However, maximum junction temperature is not the only limiting factor but the module lifetime. This is due to the temperature cycling effect which is also a key design criterion. To mitigate the effect of high ΔT events, the chip solder system has been improved to provide a 40% increase in the power cycling seconds capability, for example, 60.000 cycles at a ΔT of 100K of the chip. 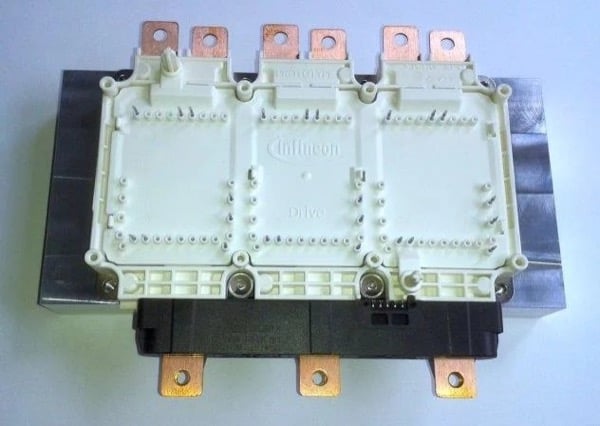 The development of a new lower loss, higher temperature rated IGBT and Diode EDT2 chipset offered two different module design paths. The first design  is a smaller lighter module with a similar output current capability as the existing HP2 module. At the same time, the new package could incorporate some technical advantages such as lower inductance and press fit control signal pins. This was the chosen design path for the HPDrive. The second design path is incorporating the EDT2 chips into the existing HP2 package, which allows an increase in current rating from 800A to 1100A.  With this, customers have the option of either increasing the current and voltage rating or keeping the same performance in a smaller lower cost package. In addition, the new HPDrive module will come in two flavors: with a pin-fin baseplate rated at 820A or with a flat baseplate rated at 660A. These new ratings will expand the HybridPACK™ family and complement the extensive Infineon range of automotive and CAV rated power modules, such as EconoDUAL™ 3 or PrimePACK™, designed for vehicle traction drives.

With this paper, the authors hope to illustrate the importance of a holistic design approach, where all the different component parts of a power module must work together to best meet the application requirements. For example, the reduced chip on state voltage, the chip gate pad layout, and the plastic frame control pin placement all contribute to lower losses. Increased chip voltage rating and lower module inductance allow for operation at higher bus voltages. A higher chip temperature rating, improved chip bonding technology/materials with lower losses all contribute to higher stall/locked rotor current capability and increased motor starting torque rating. Overall, a physically smaller module with reduced active chip area, lower losses and the ability to use the latest high volume assembly techniques all contribute to a lower system cost.

Andre Christmann works as a Systems Application Engineer for High Voltage Power Semiconductors at Infineon Technologies located in Livonia, Michigan, USA. He is part of the Infineon Sales & Marketing organization and works closely with Sales team, Marketing team and the Business Units. He supports the account sales team and customer base by providing application engineering support, demand creation, product value propositions and training covering automotive OEM and Tier1s. He is particularly skilled in power electronics, semiconductors and product development. He earned his Doctorate at the Ruhr-University Bochum located in Bochum, Germany.

David Levett works at Infineon Technologies as a Power Electronics Design and Application Engineer. He is responsible for the application and design for power electronics in machines, planes and other technical disciplines from gate drive design, stack protection, mechanical assembly, thermal system evaluation to EMI mitigation. He enjoys conceptual designs and design reviews as well. He is particularly skilled in the field of power electronics and design, as well as grid tie power converters in solar, wind and battery. He earned his Ph.D. in Electrical Engineering at the University of Southampton located in England.